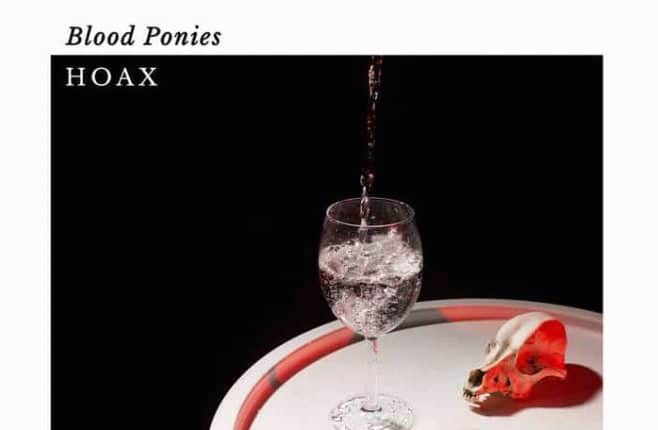 If the current crop of post-punk revival bands has grown stale for you then this San Diego band is worth your time. The deluge pouring out from this genre’s rebirth in the early teens has slowed in recent times to more of a trickle. I grew weary of pressing play and then saying “ I get it, I like Unknown Pleasures as well, what else can you do?” Blood Ponies brings a different spin to the old dark wheel of post-punk. They don’t overly rely on the punk side of the equation, but don’t forget it either. Employing a range of shades to their often despondent sound with a low synth-like bass frequency opening the album. Looming baritone vocals that give into their anger and bark out with aggressive tendencies. Sometimes these are mixed into the background, others times roaring out. This is a needed change from hundreds of other post punk bands who allow the guitar to hold all the tension as the vocals remain a detached monotone.

Blood Ponies don’t stick to one formula. The album has quite a dynamic range. The only constants to their sound are the often hypnotic droning patterns of the drum. They go from the explosive title track to the catchy croon to the verses of “Four Walls.” The chorus gets rowdy almost like an Amp Rep kind of band. The guitar rings out with a shadowy chill, while the crank out something with a more straightforward rock n roll vibe. “To be hungry already means you want to be free” is an experimental interlude focused on manipulated samples. They haven’t altogether forsaken any influence of Joy Division, as it can be heard on the song “Hostile Takeover” it’s just not where their sound begins and ends. “The Body” is more brooding but similar in execution, with a more ghostly reverb to its surf rock guitar tone. “2182” the pulse of the drums is somewhat similar to patterns we have already heard, so it relies more on the guitar to break things up.

The last song allows the drums to sit back and wait for the right time to kick back in, leaving the guitar and vocals to bear the weight of the song. Both are capable of doing so as the melody gets more interesting the further into the song it goes. The risks they take by breaking from the more conventional approach to this sort of thing pays off. It allows them to become something darker and heavier than the average post punk band. This is what goes a long way with me. There is not a retro obsession, though sonically true to the era from which this genre was spawned. I hope post-punk flourishes in 2020, but like these guys, they’ll take these kinds of chances and break from a mold. This is certainly needed for the genre to stay vital and not become a trend that fades from stagnation. This album should inspire fans of the genre to support the future of dark punk to come.

In this article:Blood Ponies, Featured