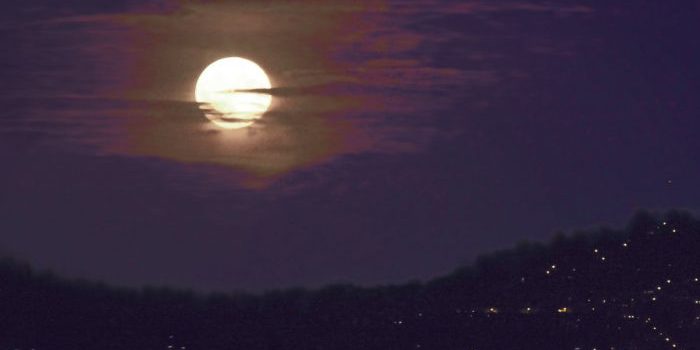 Uplifting dreampop duo Devoured By Flowers recently released their first full length album one year after The Luminescent EP. Moonscape Hotel is a beautiful follow-up release with an epic sound akin to Echo and the Bunnymen, perfect to daydream to. The lyrics evoke pretty nature visuals that match the music perfectly. What I really love about this LP is that the songs don’t follow a standard formula, there aren’t really choruses and verses – they feel like individual stories.

The album opens with the first track off their previous EP Luminescent Sun (Eclipse Version), an essential Devoured By Flowers track because of the catchy forever-stuck-in-your-head melody. It has a very pure summer vibe, evoking beautiful feelings of nostalgia. “Seaside” is softer and sadder in comparison, but just as heavy in fanciful imagery, telling a fantastical story. A big highlight for me is “A Thousand Tears Under Stars” – it’s melodic, dancey, and I love the guitar effects. “Faerie Creatures” opens up with an ominous tone, but it’s actually on the whimsical side with its fun synths and upbeat, ever-changing melodies. The second half of Moonlight Hotel feels less playful and more gloomy. “Nest” begins with lyrics and feelings of springtime, but from there slowly evolves into this fantastic interlude song reminiscent of something off of The Cure’s Bloodflowers with its goth-tinged shoegaze. The vocals in “Pomegranate” immediately bring Echo and the Bunnymen to mind, but the lyrics are much more flowery and among my favorites on the album: “If only the pomegranates had not seduced Persyphone summer fields would last forever”. The guitars and synths work together to create angelic, icy soundscapes.

My favorite song on the album is “Nothing Is Lost,” which leans on the spooky side with bass and guitar lines reminiscent of The Cure. I love the message of the song: “The earth will spin, the sun will fall and rise again”. “The Morning Star Rises” is  fairly melancholic in tone (“Death is the only freedom many of us will ever know”), but it also gives off a whimsical mystery fitting for a novel. “Gold Tide” describes a girl in impressive bouts of graceful poetry over several musical elements evoking a surreal, dreamlike quality. Moonscape Hotel closes nicely with “Only A Dream (Moonscape Version)” which was originally track 2 on The Luminescent EP. The placement is so fitting because it’s slower and mournful, almost contrasting the album’s opening. Devoured By Flowers performing at the Star Theater. Photo By Marshal Serna.

Moonscape Hotel is an excellent album to put on at home no matter the weather, although an overcast day would be most fitting. The album is available both digital and on CD via Bandcamp.