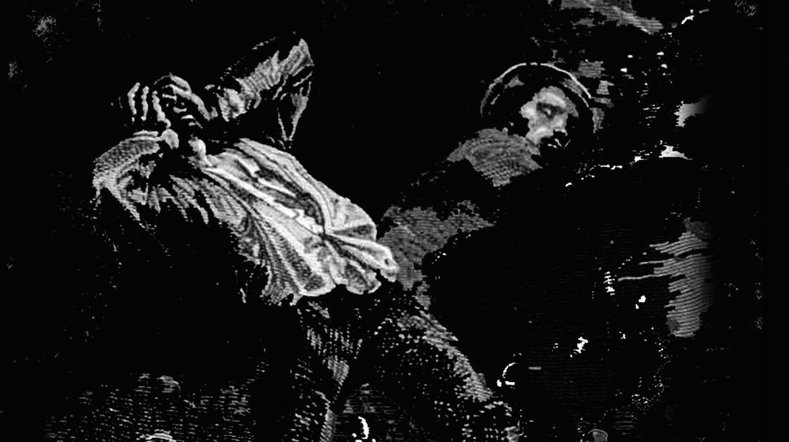 Vrasubatlat is a label from Portland, Oregon that has released several commendable records this year. Amongst them is the mini-album or EP from Utzalu entitled Drowning in Sanguine Screams. The task of describing this band’s unique sound is rather daunting, and, as to be expected, the band plays a genre-bending mish-mash of disparate elements. Dark, punk-influenced mid-tempo downpicked riffs are paced by a snare drum, bass drum, snare drum, bass drum four/four time signature jam that reminds me a lot of mid-tempo black metal segments. When black metal slows down the tremolo riffs to invite a headbanging session out of the audience, bands often slow down to add nuance. So, if you like that sort of thing, Utzalu’s Drowning in Sanguine Screams is raw, down-tuned music meant to add more than a hint of nightmare black to the antinomic range of moods projected here.

Utzalu’s sound is primitive, relying on playing plenty of downpicked guitar chord transitions and discordant bass that modern minimalist dark music fans love. Like a factory shut-down during the Great Depression, morbidly brooding over the landscape of the city as a home for feral animals and runaways, Utzalu takes you to a place where hope is lost or is in inevitable decline. Drowning in Sanguine Screams is quite suitably chill music for the hopeless and abandoned, gathering in dark places for a round of recreational drugs passing between unhappy hands. There’s also a great deal of lechery in the lyrical themes, which is perfect for lovers with unconventional sexual practices.

Like an extreme metal band moved by the infamous soundtrack to the movie The Piano, entitled The Heart Asks Pleasure First/The Promise, this band ignites sexual violence between consenting adults jaded with the music industry at large, who make love to the tune of wild, eccentric savagery, the sound of which is captured majestically on this EP. And while this array of images presents some degree of comparability between the music and likely audience, Utzalu claims no such thing. Instead, we gather ideas as the music speaks to us, and some of these impressions may be bizarre or disturbing. I doubt the band will disagree with the various concepts applied to fit their music, just that music itself needs no license to trend or movement, and only speaks to the listener themselves. In that way, I find that bizarre images fit the music quite like a soundtrack suits the mood of a scene. Make no mistake, while Utzalu’s music is raw, dark and violent if only for sadistic intent, the music is actually quite soothing for headbangers who love music locked into mid-tempo. This might just be stoner music for the morbidly perverse. Else, enjoy this at a birthday party and celebrate death instead of life. The vocals sound like they’re emanating from a charnel house. The occasional feedback from the amps culminates in a track full of said feedback, last track, “Therese.”

While the album is, for the most part, evenly-paced and prevents listeners from distinctly identifying each particular track, the album’s brevity keeps listeners interested during repeat listens.

This is also likely to prove fitting soundtrack for those who suffer from dementia. The riffs aren’t dissonant, but the raw production quality and grit on the guitars invites feverish souls that are pleased only by art authenticated by traumatic experience. The underbelly of the world is a dark place, and few bands can accurately capture its tenebrous nature while doing so in a mood that helps listeners appreciate it a little better. Lovers of the dark, whatever lost cause spurs your hope, may Utzalu commemorate your journey into the void with this mini-album. Cvlt Nation-certified kvlt.