Inauguration of the Pleasure Dome, directed by Aleister Crowley enthusiast and filmmaker Kenneth Anger, is an occultist’s dream fevered-up and grafted onto celluloid, with symbols and sigils of alchemy, Baphomet and Hell strewn across a 38-minute short film. Viewers who either do their homework and trace back the roots of the counter-culture will realize what a profound effect Kenneth Anger had on future filmmakers and musical artists, including Nicolas Winding Refn, Alejandro Jodorowsky and The Rolling Stones – just check out the band’s 1968 video for the single Child of the Moon and it’s relatively easy to pinpoint the elements of the occult in music video form and the influences derived from Anger’s short films. What makes Inauguration so special is that it acts almost as the sui-generis of the occult being popularized by counter-culture figures and making crossroads and planting the seed in people’s consciousness before the full revolution bloomed in the late 1960’s. Still photo from a scene in Inauguration of the Pleasure Dome

Inauguration of the Pleasure Dome was released in 1954, and it’s almost unfathomable that such a film could exist, especially the themes of esoteric imagery and taboo forms of sexuality at the time being explored during a time of closed-mindedness and a dominance of “traditional” values. But Kenneth Anger was, and always has remained to this day, an enfant terrible, a raconteur of cinema stretching back to the late 1940’s, when he explored gay themes and homosexual imagery in his first film Fireworks. Describing Inauguration of the Pleasure Dome would be a difficult task, because no formal narrative or words are either detailed or spoken. This means you the viewer have to take the arduous, but ultimately rewarding, journey of imbuing the essence and feelings of Kenneth’s Inauguration, taking a holistic approach of letting the entirety of film – the music, the sounds, the visuals – control you. If I had to make a flaccid and unjust attempt at describing the film, I would say that historical figures not bound by time meet for an ambiguous feast or group ceremony and conflict soon arises when opposing ideologies clash. What happens afterwards is up to anybody’s interpretation, but my sincere version is that black magick is used against one another, and none of them realize it until it’s too late, so they descend all into Hell.

Again, it’s important that you the viewer take the proactive role of letting the movie wash you over and then deciding what all the elements meant. I sure as – ahem – hell enjoyed the explicit imagery of seeing actors dress as the skeletons from Dia de los Muertos interlaced with alchemic symbols and pentagrams. Inauguration of the Pleasure Dome is Kenneth Anger’s magnus opus and we are all the more grateful that a short film like that exists here, in this realm. I’ve provided a link down below for other’s to check it out and inform themselves of a very important artifact of the counter-culture, before it even blossomed. 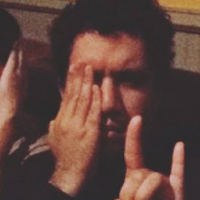 Previous education is University of Virginia and prior occupation on social networks state Master of Sigils at the Abbey of Thelema, but I never cared two-cents about what real employers thought. Homegrown Northern-Virginian with close proximity to all things DC. Check out my writing and Instagram, and the occult-related material will rob you of your soul and then get deposited in my back-pocket. Don't worry, I'll take care of it. I promise.