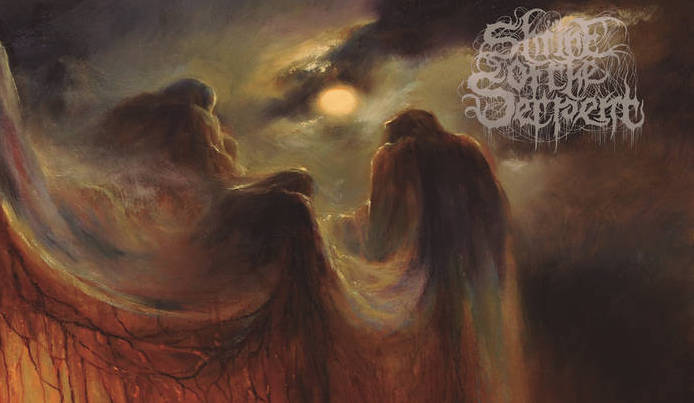 Despite decades of listening to heavy music, there’s still something about a slow riff delivered by perfectly-saturated amp that still gets me excited. On Entropic Disillusion, Portland’s Shrine of the Serpent delivers thundering slabs of sludgy doom riffs that are served up with what has to be one of the year’s best guitar tones caught on recording. Shrine of the Serpent have been around for a while (they started in 2008 under the moniker Tenspeed Warlock), and over the course of demos, splits, and EPs, have honed their craft of patient-yet-monumental death doom. Entropic Disillusion (on CD by Memento Mori) is their first full length, and it shows a band that understands the genre perfectly: when to pull back, when to build, when to rest on a slow groove. It’s one of the most rewarding albums of the year and will hopefully get this killer band on more peoples’ radars. I posed some questions to guitarist/vocalist Todd Janeczek – our interview is below.

If the band had a mission statement, what would it be?

The only thing certain is death and the dissolution of yourself, do not put off life while you have it.

For a few years, the band was known as Tenspeed Warlock. What prompted the name change?

It was just time to move towards something else. The motion was completing, so to speak, and myself and original drummer Garrett Hubner wanted to keep playing and John Boyd and I had been discussing playing some music and the end result was shrine of the serpent. The topic of reforming Tenspeed Warlock and doing some new stuff surfaces from time to time still.

Can you tell me a bit about the current lineup? It seems like it’s always been a trio, but there’s been some changes over the years.

Current line up consists of myself, Chuck Watkins on drums and Lauren Ferber on bass. The line up finally feels super solid. No personality conflicts, ego or temper issues. No more drama, I’m sick of it. At this point we are looking forward to our tour in early fall and working on new songs. Last year saw a split tape (with Black Urn) containing two tracks; one of them (Desecrated Tomb) is on the album. Why did “Catacombs of Flesh” not make the album?

What are your influences (bands or otherwise)?

Let’s see… I have a pretty good little occult library at home, HP Lovecraft, horror movies like Night Breed, the Ninth Gate and In the Mouth of Madness, Into Darkness, war movies mostly about WWII and WWI, etc. Those conjure up some great imagery for me that I can work off of. As far as bands go, Cathedral, Asphyx, Nortt, Coffins, Black Sabbath, Thergothon, My Bloody Valentine, Sisters of Mercy, Fields of the nephilim. I love dark ambient music as well.

Death Doom is a tough genre to nail – tell me about your writing process; your songs seem pretty layered for a trio. Does it take a while for a track to come together?

Yes, it takes a bit to get it to where we want. It’s a process of building and tearing down. I constantly worry about being able to reproduce it live. I never want to write songs that we can’t pull off faithfully or perform within a reasonable tolerance. The main part of the song is fleshed out first and then from that I will let it tell me what the concept for lyrics will be.

The cover art for Entropic Disillusion is amazing. How did it come about?

It was just a process of picking an artist we all liked, really. The other guitarist was very into this style of art, and, honestly though I do like and find Marius and Vladamir to be an amazing painters, it it is not my aesthetic and stylistically that will not be revisited again. It marks the end of a chapter in Shrine’s history. Portland has a thriving metal scene. What are the pros and cons to operating out of a city with so many bands and venues?

I really don’t see any cons other than there are so many good bands that I can’t keep track of them anymore. I’m privileged to know a bunch of the folks in them and even more so that I’ve gotten to play music with some.

All the line-ups I can find online mention just Guitars, Drums, Bass, and vocals, but there are some ethereal/ambient moments on the album (especially the track “Returning”). Are those moments guitar pedals, or is there some uncredited keyboard stuff going on?

Actually, that’s me. I have a dark ambient project,  withering of light. I actually just finished up a new record that I’ll be putting out this fall. I use some real instruments but mostly get synth, laptop and controller.

Speaking of gear, can you walk us through your rig? And is there a difference between your studio setup and live?

There is no difference between my live and studio setup. I use a Sunn beta lead and a Music Man HD150 that I split into 2 different 4x12s. the Sunn I run more highs and the Music Man pushes more lows. My guitars are an old BC Rich Mockingbird that my friends Andy and Matt from Bewitcher (if you haven’t heard them you need to) gave me and a couple of Al-2500 guitars from Agile which are my favorite. I have a small pedal board with an MXR Distortion, Mr. Black Eterna, Boss DD7, Harmonist and a tuner that I run into a Morley ABY box and then to my amps.

Entropic Disillusion is already getting some great press (and deservedly so – it’s a fantastic album) – what else does the year have in store for the band?

Working on a new record and the aforementioned tour. The next one will be shorter as we would like to see vinyl happen for it. We have our sights set on a couple festivals as well as getting over to Europe and/ or Japan. Outside the band we are all good friends and try to hang out and stay in touch as much as our schedules allow.

Thank you so much for your time!

Thanks for having me do the interview!

In this article:Entropic Disillusion, Portland, Shrine of the Serpent, Todd Janeczek