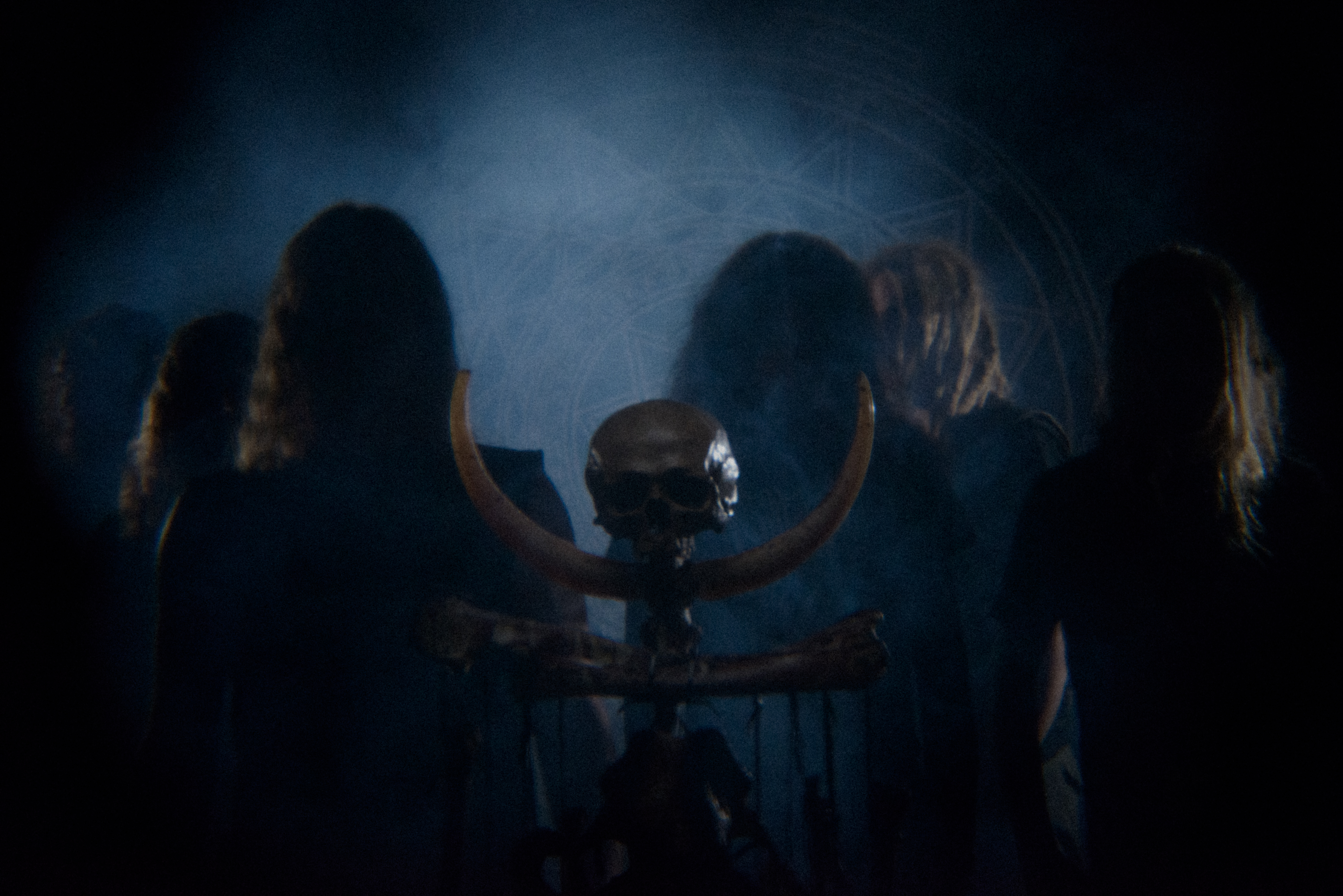 In the eight years of their existence, Dark Buddha Rising has produced six albums. Now, if that’s not productive, I don’t know what you can call it. The ambient drone/doom band has been able to conjure great albums of dark psychedelia, filled with mysticism and a twisted vision of reality, with the absolute peak coming with their previous release, Dakhmandal. Now, two years have passed and they make their return with Inversum, which is the starting point of some changes for the band. The most prominent one is that the record marks the opening of the third cycle in the existence of Dark Buddha Rising. In addition to that, it is the first that the Finnish band is releasing through Neurot Recordings, and it was also recorded in the recording/practice space that the band shares with fellow Finnish alchemists, Oranssi Pazuzu, called Wastement. To top it all off, the band has had big changes in their line-up, with the new members, V. Vatanen (guitar, vocals), J. Saarivuori (keyboards) and M. Neuman (vocals) making their first appearance in the recorded works of Dark Buddha Rising.

The occult quality of the record is felt even from its cover, with the mystical signs making another appearance in the works of Dark Buddha Rising, but at this time with a white cover instead of the black colour that they have been using. The second occurrence of the esoteric references from the band comes with its song titles. Two songs exist within Inversum, with the names “E S O” and “E X O,” with this possibly being a reference to the Greek words corresponding to the “with-in” and the “with-out.” Obviously all that act simply as the appetizer to the lysergic journey that they set to undertake. The push towards the ambient domain is not very prevalent in this record, but Dark Buddha Rising seem to be using it as a point of origin for their music. “E S O” comes with its ominous opening, and steadily creates an ambiance that becomes heavy and unyielding as each second passes. The feedback is raging, something that Dark Buddha Rising are making great use of, and they are able to give the track a suffocating quality. The beginning of “E X O” finds them again at this inceptive point, with a more minimalistic outlook this time. The addition of samples creates a richer atmosphere, from which their second sonic exploration will begin. Even though there are not many moments in the midst of the tracks in Inversum, when Dark Buddha Rising will suddenly switch to their ambient self, they do so a third of the way in “E X O,” radically bringing a mystifying ritualistic quality to their music. The awakening is subtle but that does not take anything away from its dark, majestic quality with the voices deep within the background, as the soundscapes turn to pitch black.

However, the biggest leap in terms of the music comes with the enhancement of the psychedelic dimension of the band. In Inversum, Dark Buddha Rising really add to their heavy artillery, giving a better flow to their music, and a more horrific vision of what they are aiming to achieve. There is something toxic and acidic about their psychedelic moments. When the drums finally appear in “E S O,” the true trip begins as the heavy bass lines are guiding this tormenting offering. The sparse guitar lines appear and disappear with the same ease, giving moments of variation from the standard themes of Dark Buddha Rising. The process still retains its ritualistic vibe, therefore containing a quite bitter quality, but the exploration of the space is nothing short of magical. Especially considering the build up that the band performs on this part, with each passing drum hit adding more power and drive to the psychedelic orgy, resulting in the complete loss of self in the process. It has a transformative quality despite the repetitive patterns that Dark Buddha Rising make use of. Near the end of “E S O” the band resumes their psychedelic nature, but now with a certain urgency, giving the impression that the band is more focused, more keen to give an end to this drunken recital, resulting in the final bitter and abrupt end of the song. The second instance of the psychedelic evolution of Dark Buddha Rising comes with “E X O.” What signals this switch of dynamic is the tribal vibe that the band is methodically building. Even though it retains a monotony, the sound becomes heavier and heavier, with the guitars joining in to create a Swans-ian repetition. The track turns from abstract to dead serious within a matter of seconds, with each iteration becoming darker and more menacing. The overflowing quality of the song is complete with the addition of effects on the background, rounding up the fumey nature of the song, while the band, almost suffering a loss of consciousness in the process, mechanically produces the continuation of the track. It seems like they have retreated into a sort of trance initiated by their repetitive, psychedelic rhythm.

All of the above does not mean that the band has left behind their heavier manifestation,and there is a healthy dose of doom in Inversum. The primal core of Dark Buddha Rising is retrieved near the end of the first part of “E S O,” with the heavy distortion coming in and splashing the soundscapes with harmonics. The band does not leave behind their trippy self in the process, with the effects especially retaining their disorienting edge. For a big chunk of the time they spend on the doom territory, they explore the heavier, more destructive side of the genre. But there are also moments when a different side of doom arises. “E S O” makes a slight turn towards a more distinct groove that Dark Buddha Rising carry on their path towards enlightenment through heaviness, with the vocal performance above the heavy core making the track result in a doom haven. “E X O” contains similar parts, with a deeper, heavier groove sneaking in the track. They explore a more straightforward outlook, with slight leads giving the necessary variety to the song, as the apocalyptic blasts bombard the psychedelic soundscapes. The big surprise, however, comes in the final part of “E X O,” with the band resorting to a sludge-oid fury as the band returns to their doom self with an injection of stoner as well. This is more fast-paced, and even though it retains the repetitive themes of the band, it boosts the energy of the track, in particular near the end of the song, where it almost verges on chaotic territory. The last weapon in the arsenal of Dark Buddha Rising, and probably the most devastating one, is their drone. Even though not aggressive in nature, those changes can do some severe damage with their minimalistic, but destructive form. A perfect example is the part in “E S O” as the band, retaining the fluidity of the track, induce a drone quality in their overall performance. The rhythm section retains the pace and tempo of the song, but the guitars bring forth the terrifying vision in all its sickening glory. The solitary guitar that emerges and takes the lead from that point on, leads the song in a strange vortex where time has stopped and life has seized, a dark desert is unfolded and everything else dissolves around it. Another instance of this drone utopia is the next to last part of “E X O” with the ambient effects acquiring the central role, as the heavy guitars and drums desperately attempt to retain something of the lucid substance of this work with sparse remainders of its previous existence.

Inversum is a dark oasis that Dark Buddha Rising have lost themselves in. It really feels like the band set out to create a dark opus, and through their recording sessions, they have become part of its darkness as well. It is quite interesting that with Inversum, the band is opening a new cycle to their existence. Imagine that this is just the beginning of this dark chapter… It is daunting to attempt to philosophise about where the work that brought Inversum can lead to next…