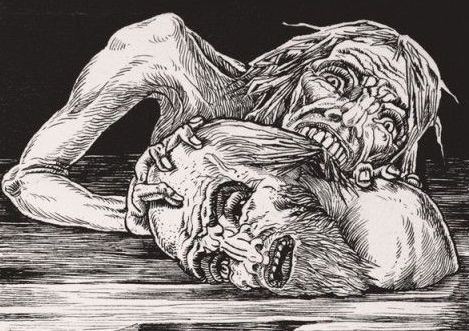 Modern warfare is a tool of the elite, and one of their most masterful PR campaigns. They have convinced huge swathes of society that it encompasses the most noble of all human actions and emotions, and is something to revere and respect. All the while, it reduces humanity to our most debased and violent state, encouraging in us everything that we know is wrong and immoral. These days propaganda disguises itself as “news” delivered to us by “experts,” carefully alluding to atrocities committed by the enemy in a highly calculated way. But during WWI, propaganda took a more obvious form, as you can see below with the amazing Danza Macabra Europea postcard series crafted by Italian illustrator and printmaker Alberto Martini. He created 5 sets of anti-German postcards that were shipped out to the front lines to give heart to the troops fighting the Kaiser. They showed how heartless and terrifying the enemy was, a demonic force of degrading sexuality and cannibalistic murder. These postcards were meant to fuel hate in the hearts of the weary, exploited soldiers who lay suffering in disgusting, disease-filled trenches with their limbs rotting off. Taken alone, these are amazing works of art. Paired with their purpose and they become truly disturbing. “Empire of Death”
Austro-Hungarian Emperor Franz Josef is portrayed as a mutton chop demon. In his eye socket to the left is the Serbian Gavrilo Prinzip who assassinated Austro-Hungarian imperial Heir Apparent Archduke Franz Ferdinand in Sarajevo on June 28, 1914. This was the spark that ignited the World War. A skeleton Franz Ferdinand is in the right eye socket of the Emperor. Hanging from Franz Josef’s elongated demon ears are victims of Austro-Hungarian atrocity in the Tyrol and Balkans following the assassination.
No. 17
(The left ear reads Trento and Trieste, Austrian provinces populated by ethnic Italians and the right ear reads Serbia – which Austria-Hungary attacked and upon whose civilian population they performed slaughter.)
At center below is a sword-skewered two-headed bird symbolizing that the demon Franz Josef will be the death of the Austro-Hungarian Empire, of which the two-headed eagle was the national symbol. German Kaiser Wilhelm II is portrayed as a turnip head in this card that explains “The turnip that the Prussians wanted to plant in Paris “. Martini’s caricature both highlights the crimes of the Germans as well promising retribution to the Kaiser. On the turnip’s leaves are the names of the cities Luvain , Reims and Paris. The Germans gratuitously shelled and then put to the torch Luvain and Reims. There was little compelling military reason in Reims, and not in Luvain. Luvain had, in fact, been abandoned by the Belgian army. The destruction of these cities, considered gems of European medieval art and architecture proved to the Allies and the world, that the German claim to be “cultured” was false.
No. 13
The names of Luvain and Reims came to be synonomous in Allied anti-German propaganda with “barbarism” and lack of civilization. The promise of retribution, by France, is symbolized by the smiling skeletal “Death” who wears the French revolutionary cap and holds up a guillotine. 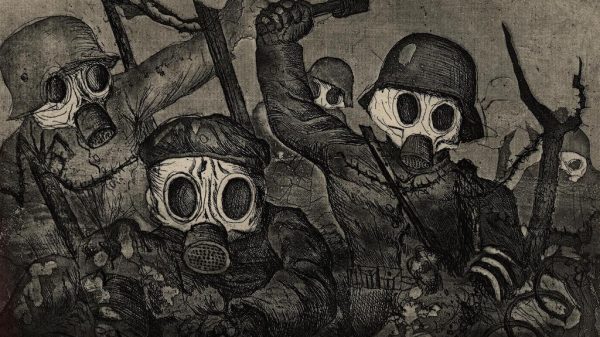 I have a vivid memory of the second Gulf War. Not from experiencing it first hand, but from walking into my friend’s room, seeing...