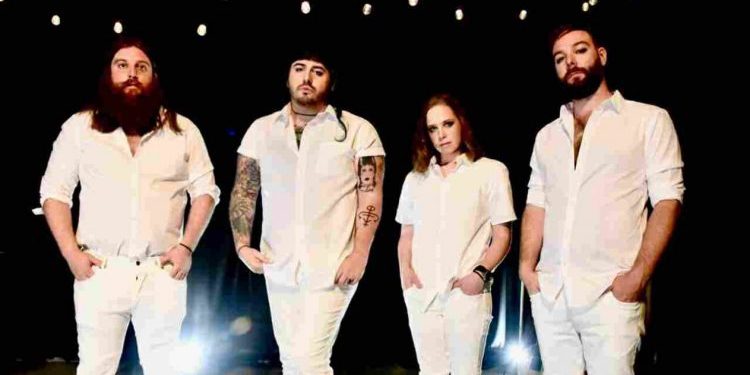 With their latest offering from Hampton Roads’ darkwave synthpop icons, Pain in the Yeahs have honed in on the mastery of their signature no-wave, shoegaze dirges.  The album “Dopamine Noir” spirals in and out of anxieties and assurances of frontman James Wagner’s sincerity and beckoning.  Channeling pulsations at times from analog giants of years past with enough fresh spin and soul to captivate the modern ear, with urgency and desperation.

Mr Wagner took the time out his increasingly busy schedule to talk about the history of his musical take and the direction Pain in the Yeahs are heralding. The group have also entrusted the premiere of their latest music video for “Anyone but You” to the Cvlt Nation masses..

Having been involved in aggressive music for so long, what spawned Pain in the Yeahs for You?

Despite playing in almost exclusively aggressive bands for 15+ years, my earliest musical interests were bands like Tears For Fears, INXS and The Cure. I love the energy and immediacy of heavy music, but after a while I started to have ideas that were a bit more of an experimentation in sound, ideas that didn’t rely as much on the typical band formula. After Feral King disbanded, I got ahold of a cheap keyboard and some free recording software and started learning how to compose music by myself.

Who is the current lineup, their role in PITY, and their background?

Bobby and Jesse Phillips of the production team Electroganic were the first to hop on and help me construct the live show when I was finishing up this record. Bobby manages the band and stage show, and he also plays guitar. Jesse plays bass and handles various rhythm section functions, and Riley Finwood handles live percussion. Also integral to the band is my brother Jon Wagner and my friend Jacki Paolella, both being incredible audio engineers that have helped shape things from the ground up. What was the inspiration for the name if the group?

I honestly just thought it was clever. I try not to divulge my personal meaning of the name, but I will say that I had no idea that the acronym was “pity” when I came up with it.

How has “Dopamine Noir” been received and the response as you venture further out of town?

It’s definitely been received more enthusiastically than anything I’ve done before it. It’s one of the first times I’ve been a part of something musical in which people assign their own meanings to the songs and are outspoken about it. It’s a particularly confessional record, so that means a lot to me. Out of town shows have been particularly good, it’s fun to watch people that are unfamiliar with what we do soak in the first few songs before they loosen up and join the party.

What does the songwriting process entail? Do you have a muse per se?

All of the songs usually start with a simple guitar, bass or synth line and a complimentary drum pattern. I usually don’t have anything super mapped out before hand, and I usually like to just write as I record. Layering sounds in the studio is easily my favorite part of making music. There have been times when an entire song comes to me and I arrange it in my head throughout the week before simply walking into the studio and tracking all of the instruments. If I had a muse, it would definitely be Brian Eno. His prescribed outlook on honoring mistakes or flaws as hidden intentions, as well as thinking of distortion as added character has been a huge influence on me.

With the release of “Dopamine Noir” and the video premiere for “Anyone But You,” PITY seems to be picking up momentum.  What’s exciting for you coming up and in the distant future?

Touring and out of town shows, mostly. We want to reach as far as we can, and we’re steadily developing our plans to do so. Until then, I can still be found in the studio two days a week, shaping sounds and plotting the next move.

What are some standout moments for you with this project, positive or negative?

The most positive moments are the messages about how much impact certain songs have had on people, as well as the local support I’ve received. What keeps you moving forward and motivated as a musician, performer?

I’d like to say that creating is my drug of choice, but most weeks it’s as much of a necessity as air or water. I think some people are just born to put on a show.

In the modern age.. digital or physical format? Discuss.

They both have merit. The immediacy of digital is as attractive to me as the romanticism of physical formats. I would like to do as many formats as possible because each offers a different opportunity at self expression.

I would just like to say that everyone is invited to be a part of this, and thank you so much to everyone who continues to do so.

In this article:dark synth, interview, music video, no wave, Pain in the Yeahs, shoegaze, Synthpop