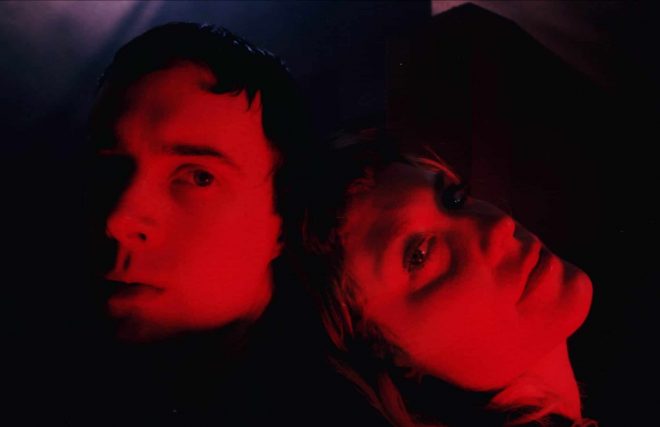 In recent years, goth is more well known as a fashion hashtag on Instagram than the umbrella for the musical celebration of darkness. This is why albums such as BOY HARSHER’s The Runner are important. Even as they evolve further from traditional darkwave, this duo becomes an even more important name to DJs in the scene. Their 2016 full-length debut helped breathe new life into the darkwave underground. Since its release, the duo has amassed an impressive following rivaling that of Drab Majesty.

This time they have made more than an album. The duo not only broadened their horizons but brought their legacy around full circle. This is a soundtrack to a film of the same name they made during the pandemic. Having met as film students in Savannah, GA, film seemed like the next natural outlet for their creativity with touring no longer an option. The movie — which is now streaming on Shudder — is a psychological horror film starring King Woman’s Kristina Esfandiari. Despite being a soundtrack, this album is not just atmospheric swathes to paint the background. Half the album consists of fully-formed songs.

Rather than pick up where they left off on their 2019 album Careful, instead, they embrace a brighter 80s-flavored analog synth sound. This calls for the production to be not as murky as past releases and offers more sonic space in the mix for the more refined vocal to sit front and center. This is not to say her vocal approach has taken that drastic of a change, as the melody to “Give Me a Reason” is not unlike the vocal arrangements of their older material. Also, all of the studio polish being added here does not equate to selling out, and never crosses over into modern pop territory. This album also features a couple of guest vocal spots, with the first being Cooper B Handy of Lucy, whose voice works well for the upbeat dancey new wave of “Autonomy.” Most of this album’s darkness lies in the instrumental pieces that do feel more like a film score. “The Ride Home” is one of the few instances where it feels more like a soundtrack and less like a song on a stand-alone album. Most of this is due to the vocals not really being a focal point.

“Escape” finds them splitting the difference between atmosphere and conventional songwriting. It is more lo-fi and introspective in its throb and works much better than the previous piece. It even sounds like there are some single guitar notes played in a few places. Mariana Saldana of BOAN adds a guest vocal to “Machina.” This one finds them leaning more heavily in the direction of 80s new wave. Robotic synth vocals accent the chorus, creating what science fiction sounded like to pop producers in the 80s. “I Understand” is more heavily atmospheric with the vocals whispered against creeping dream-like synths.

If you are keeping score at home, the album starts with strong songs then goes in more of a moody soundtrack direction, so if you are a fan it depends on what you want from them. After all, scoring a film and writing songs for goth night are two different things, unless that film is The Hunger. Not that I would call this a darkwave album, but it shares the needed sonic touches to connect with their fans from that genre. Even when the clouds of cinematic ambiance threaten to obscure things, the maturation of songwriting prevails to make The Runner a compelling listen.