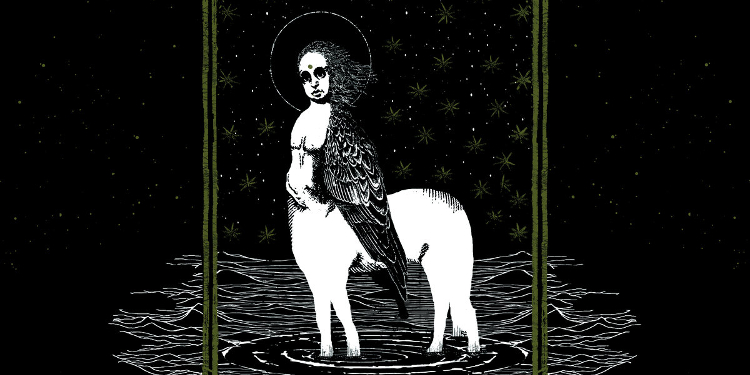 No newbie to CVLT Nation, you may already know about the one man space-worshiping industrial blackened doom metal project PHOBONOID – a project birthed and masterminded solely within the mind and imagination of Lord Phobos, a lone soul hailing from the Italian Alps, who creates cosmos-obsessed glacial and tormented industrial black metal packed with alienating and hallucinating themes of deep-space nightmares, being lost in the nothingness of space infinity, and of the downfall of man beyond the orbit of planet earth. A meteor shower of drum machines works as the incessant backbone to some of the most blood-freezing and cybernetic sound-sculpture you will ever hear – a place of alienating and life-draining darkness where glacial riffs and hellish soundscapes paint the imaginary demise of man as his planet dies and no other place in space will give him shelter to survive. Somewhere between Author & Punisher, Darkspace, Godflesh, and Blut Aus Nord stands Phobonoid, a truly mind-melting listening experience. Tape edition out now on Rising Beast Recordings & CD on Dusktone Records Vij, are no news to this site. We had discussed their inhumanly misanthropic sludge-doom on here before. Now the time has come to re-dwell into their obscene art by attempting to survive sitting through their appalling new album. The Black Light is a black hole of slime that drags you into the bowels of hell. It’s one of the most revolting and vomit-inducing albums you will hear all year. Drug-fueled, hate-filled, plague-ridden sludge-doom for the most downcast and deviated freaks out there. Deranged fans of Corrupted, Meth Drinker, Eyehategod, Grief, Noothgrush, Indian etc. will be ecstatic to have their life pleasantly ruined by this band’s toxic and scathing amalgamation of doom, hardcore and hateful blackened noise.

The fucking heaviest dudes from The Boot right now are back with one of their most pillaging releases to date. Check your fuckin’ list if you haven’t heard of Cancer Spreading, and put this band back at the top where it belongs, ’cause this is GRADE A, top notch, cream of the crop death metal/crust (AKA stench) for the most rotten! Cancer Spreading have been covered on these pages many times before; simply put, their punk-infested death metal is the best around these days and is something you simply can’t overlook if you are into the heaviest forms of crust. The cemeteries will come to life in your brain; harrowing visions of a nuclear holocaust will shroud your mind as you listen to this band’s downcast music, all while humongous Bolt Thrower-like riffs and bone-fracturing d-beats will punish you with a force and heaviness that is impossible to believe. Read the full review – Behold the legions of hell! THREE – SERPENT RITUAL Nexvs Diaboli
This just might be the birth of a new gem. The first coming of a future super-breed of Italian death metal that one day will dominate the earth. The first demo of these Roman necromancers called Serpent Ritual is a real exercise in morbid sonic torment. Serpent Ritual play pitch black, cavernous, and tenebrous ritualistic death metal spawned straight from the most nightmarish pits of hell. Gruesome, sepulchral and vaguely occult-sounding blackened death metal for fans of early Demoncy, Grave Miasma and Dead Congregation, that also sounds like none other due to its sheer darkness and impenetrable character. A short release, but superior to the entire discographies of most bands in the genre. One of the most whopping doom albums to ever see the light in Italy. I believe Messa come from the Venice area, and holy mother of dying FUCK, they play some of the most epic, tormented, gloomy, and grandiose occult doom I  have ever heard in the homeland. But Messa’s riffs aren’t only amazing, what sets this band apart from its peers by MILES is the incredible vocal delivery at their disposal. When you hear Sara’s banshee-like chants your skin will ripple and you will wonder how the fuck this band is so criminally unknown. While showcasing clear avantgarde traits through the use the aforementioned unbelievably operatic vocals and the ominous presence of a brass section, Messa play classic, occult, and heavy as fuck stoner doom that will win over the ears of all fans of bands like Pentagram, Bell Witch, Subrosa, Windhand, Jex Thoth, Sabbath Assembly, Bathory, Electric wizard etc, while at the same time telling a story which is entirely their own and which has never been told anywhere else. Let the mass begin! The freak-duo of Stefania Predretti and Bruno Dorella have now been around for about fifteen years creating some of the most crushing, absurd, and genre defying industrial/sludge/noise rock ever to be heard by human hear. Creatura is something like their tenth record, and it must be their best one to date. This crushing record showcases the duo on an unstoppable fucking vertical climb to peaks of qualitative output that are almost impossible to believe. With Creatura, Ovo have created something monstrous (easily beating out the similar-sounding US band The Body) and impossible to define, that stands somewhere between Godflesh, Red Harvest, the aforementioned The Body, Lightning Bolt, Scorn, and Godheadsilo. Creatura means “creature” in italian, and this fucking album will devour you alive. Out now on Dio Drone.