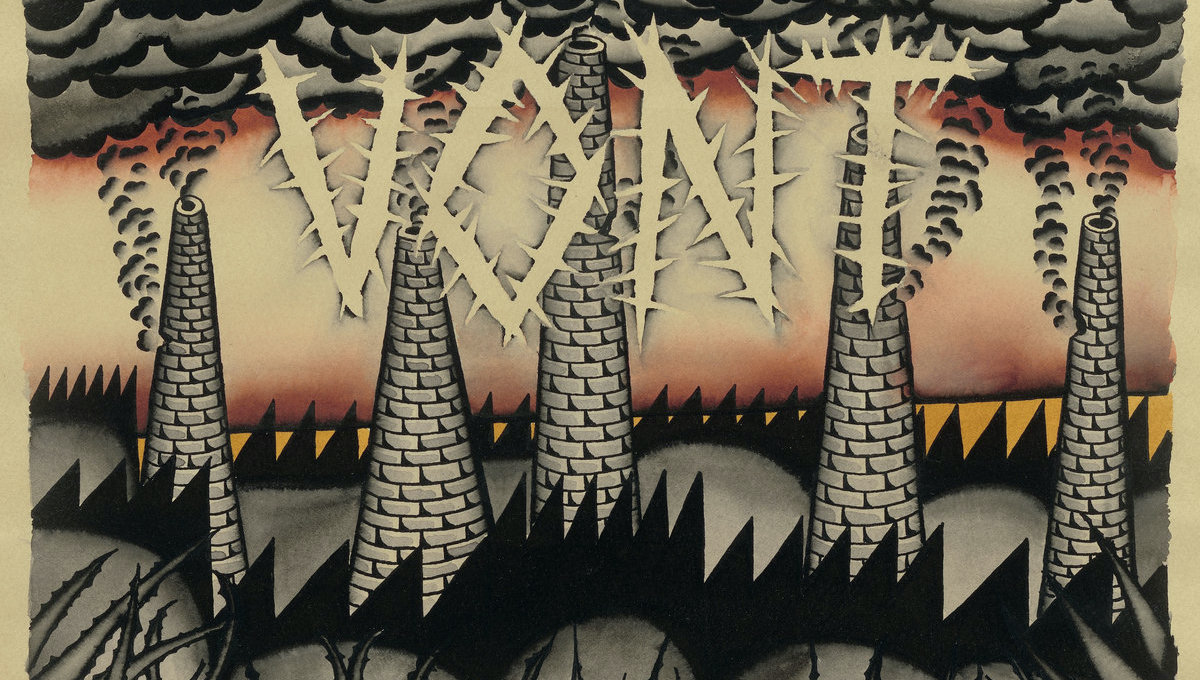 As the relentless buzz and hum of the new DODSSANG TEMPEL seeps into my skin I can feel the hairs on my arms slowly rising. And it’s weird how slow they’re moving, like I can feel each individual hair beginning to lean upward like little antennae feeling for a signal. I think the intervention is working.

And how could it not when DODSSANG TEMPEL uses such damning sounds? It sounds like the locusts are working their way across the land, leaving nothing but ruin and rot in their wake. It sounds like flesh being scraped by gravel as we drag ourselves on our knees before Mother Earth as she gives us our reckoning. It sounds like she’s tired of our belief that we’re on top of a false hierarchy and the rest of the natural world is taking their vengeance. It sounds like our own technology used against us.

#9 CONFINES Work Up The Blood

As soon as this CONFINES record kicks in with a pulsating, addictive beat, I know I’ve entered another reality. It’s like I’ve risen above the matrix and I can see the patterns and pathways that take humanity through society. Feeling unique while experiencing sameness. Feeling same while tormented by individuality. Work Up The Blood doesn’t let up for a second and I’m here for it!

The album is a breakneck berserk rampage into the abysses of industrial music’s most uncompromising fringes and deconstructed states, as the harshness of the genre’s most confrontational strongholds are hyper-developed and wielded like a blunt aural weapon to inflict maximum damage upon the listener. What sets Resigner atop the pile of elite industrial releases this year is its fearless, masterful, and almost playful juxtaposition of catchy hooks and beats with its overwhelming barrage of flailing noise and scorching abstract mayhem, a formula which truly embodies the greatest aspects of industrial’s most elite vanguards made of fearless experimentalism, controversial extremity, and tasteful and skillful composition.

rad remix of Fairground Of Tears song God Bless Your Rotten Soul by Tomohiko Sagae. The limited-edition tape came out via Instruments of Discipline. Real talk — every remix on this project is a fucking banger!!! Yeah, you can call this Techno, but I call it Punk AF! The music you are going to hear is intense, pulsating, and in your face. So come dance with me as I kick in the teeth of authority!

WTF! V0NT is back and kicking ass in the process! I fucking love the way this band incorporates cold industrial techno beats twisted around fucked in the head punk samples. When I blast this I can’t help but think that there is no band out like them.

And now for something a little different — QRTR’s record infina ad nausea is like that feeling people who have NDE’s describe where you’re bathed in an unbelievably bright light and filled with love and joy. Finally understanding what the fuck you were doing on earth in your clumsy body as you fly in every direction all at once.

“Ima arm myself right now and I feel like killing somebody white, ‘cause I don’t like white people. So I’m gonna kill somebody white and then I’m just going to say ‘I feel like my life was threatened.’”

The first sample of CBN’s Crimes Against White America throws down the gauntlet and sets a tone for the rest of the release. Play this track at your white family’s Thanksgiving dinner. Play this record at your church youth group. Sneak into the security room and broadcast these songs at your local shopping mall or Home Depot.

Noise music is a genre often rooted in frustration and anger (opinion, of course). The spectrum is broad, at times righteous, and sometimes displaced and even seemingly lunatic. On Crimes Against White America, this frustration is felt through low-frequency roars and time-shifted beats, overlayed with heavy samples, in a response to the continuing divide between the establishment and the oppressed. A response warranted by police brutality, economic policy, distribution of wealth, ongoing erosion of voting rights domestically, and a serf-like treatment of the global south.

This release is righteous.

DJ screw got married to Godflesh in a harsh noise church and they had this disgusting album as a baby.

As I sat down to watch the new single from industrial duo Jerome entitled “2050,” the bleak filming set to a darkly resting heartbeat immediately intrigued me. I wonder if before they wrote this song they visited 2050.earth? Because this song is a lullaby for a lost world. It reminds me that we’re always at a turning point in our present. Will we accept the crumbling of our toxic, exploitative systems and begin to walk a path to compassion and acceptance, first and foremost of ourselves? Or will we persist in drowning in distraction until it’s inconceivable to meet a compatible human anywhere other than on an app?

Jerome explores where our current path leads. A future of isolation in the physical and connection through tech. A place where birds have choked on their song and we have sold every piece of our data that made us animals. All of this dystopia is encapsulated in mesmerizing electronic compositions, the vocals pulsating and robotic.

Life is an illusion. We’re living in a simulation. We dwell among infinite universes. We know everything. We know nothing.

There’s a constant battle for our minds. Millions of developers plugging code into machines to draw our attention away from our breath and our presence deep into a matrix of consumption and judgment. Thousands of PR firms hard at work to spin lies into alternative facts to drive us mad. Billions of pills pumping out of labs promising us moments of bliss and escape from the cage they’ve locked us in.

Listening to Midnight Climax‘s anxiously addictive industrial techno of the new Psychic Death EP has my mind going everywhere and nowhere at once. This feels like music that’s meant to awaken something in me. The ancient peace of mind that lives in my DNA, the part of me that can’t be triggered by colors and flavors and shame and guilt.

How is it we live in a world where we invite malicious manipulation into our homes every day, knowing that their end goal is for us to hate ourselves so much that we cut our bodies, paint our faces, eat shit, castrate our souls, anesthetize our minds, and destroy our home planet? For someone else’s profit. Absolute fucking insanity.