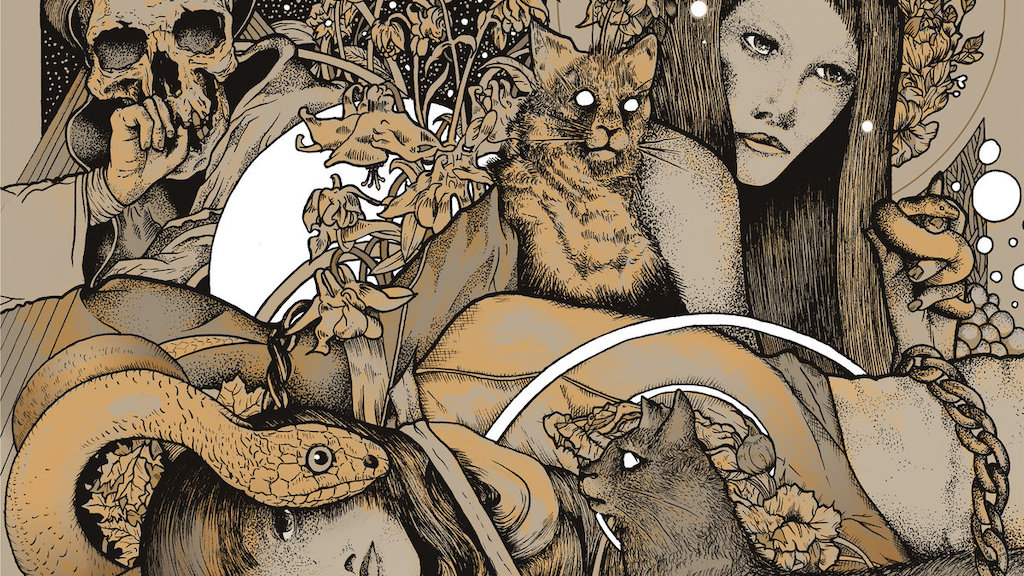 Give me a piece of your brain so that I can inject it with the otherworldly Blackened Doom of NIBIRU’s Panspermia album. To call this record out of this world would be a gross understatement because this band’s music invokes shamans just as much as it invokes unknown demonic spirits that just might heal you from your reality. They don’t create sound because they channel sound that’s given to them from another reality! NIBIRU’s music is a psychedelic trip into a galaxy that can only be entered by listening to their album Panspermia. Give yourself the time you need to immerse yourself into a space where only this music can take you!

#9 IN THE COMPANY OF SERPENTS Lux

This year, tarot became a big part of my inner journey to find peace and understanding of what I’m here to do. So I’m resonating hard with the inspiration of source and light behind In the Company of Serpents’ album Lux, and its acknowledgement and reverence of the ancient wisdoms that organized religions have bastardized for power. Listening to this album feels like a journey through the hills and valleys of life, the joyful epiphanies and painful injuries, the illusions and truths. And it’s heavy af!

Are you ready to head out into the wild and start a new life? It’s seriously one of the things I dream about; a lonely shelter somewhere in the rainforests of BC where I can spend my days surviving and my nights dancing naked under the moon. When I hit play on Crystal Spiders‘ new album Molt I was suddenly thrown into this fantasy, standing under the shadowy trees and smelling the sweet damp and decay of the mossy forest floor. Even though I’m looking out at my smoky East Van alley, I’m traveling to a place where I don’t have to witness the greed and ignorance of humanity. It’s the rumbling riffs that sound like they’re rising from the roots of some long-forgotten ancient tree and the wild and ethereal vocals that echo from somewhere in the heavens. I’m not gonna lie – it’s been a while since I listened to a doom record that made me move like this.

Excuse me as I touch the trippy hallucinogenic sky of GRIN! This cosmic Heavy Psych Doom duo creates some kick-ass jams with the right amount of Fuzz! Unholy awesomeness, when you hear their album Translucent Blades, you will realize this band is sick AF! Their songs soar, and will elevate your mind and help you transcend to a higher sonic universe!

#6 YARROW We Made What God Could Not

Anguish, Torment, Pain, Beauty, Vile, Heavy, Chilling are some the words that come to my mind as I listen to the new ULTRA FILTHY album from YARROW. This Oakland band creates mournful caustic music that’s full of pain. They deserve way more shine because they’re that fucking AWESOME! Their record We Made What God Could Not is a FUCKING Monolithic Classic!

“This music makes me feel like my eyes are trying to escape my brain.” That’s how my daughter described IRN’s track “Blood Seeping From Your Eyes” as we watched the video for it. I think we have a future CVLT Nation writer in her. I couldn’t agree more…IRN’s crushing doom is like a sledgehammer to the skull and my eyeballs only naturally escape their sockets in response. What we build is destruction. What we build is carnage. What we build is genocide. Blood literally seeps from the eyes of the human machine.

If you are an avid reader of CVLT Nation then you know we are MAMMOTH fans of JUPITERIAN! Nothing has changed with the release of their new album Protosapien which is out now via Transcending Obscurity Records. This band creates Doom/Sludge on a level that most bands will never reach. Their songs morph into these Sonic Cathedrals swirling movement that leaves the listener speechless. As a fan, I really enjoy hearing the growth from album to album. JUPITERIAN is a band that pushes music to higher heights and for that, they will always have our respect! This record only proves that these extra-talented humans are in a league of their own. Every moment on Protosapien is special and should be enjoyed by anyone who loves heavy music. JUPITERIAN manifests sounds that give my mind the space it needs to stay healthy during this crazy thing we’re calling life right now!

If you feel like your life is slipping and sliding away from you, I’ve got some heavy, dirty, filthy rock n’ roll for you to land in! R.I.P. has a new album called Dead End and it’s going to catch you in it’s strong, hairy arms and soothe you with murder in its eyes! R.I.P. have their leather-gloved hands around the necks of any heavy metal posers that dare to challenge them, but if you’re a real one they’re a fucking pleasure be around! They describe this album as being influenced by “John Carpenter films, post-apocalyptic grunge, pro-wrestling attitude and salty lo-fi hip-hop aesthetics,” and nothing has ever made me want an album in my collection so bad. I’m so stoked for Dead End because it’s low-fi and legit and I’ve already listened to it 5 times in a row and I’m going in for more.

There’s something magical about escaping into your inner universe and realizing that you’re one bundle of cells existing in and amongst other bundles of cells. Especially at a time where the world is full of factions fighting one another for who’s going to build the new world, and the oppressors are reeking of desperation and fear. The new album from LARES has me introspecting big time. The psychedelic blackened doom feels like it’s grounding me and cleansing my field of bullshit so I can focus on my fight. Towards Nothingness is an album that will fill your space with chaotic, burning beauty and captivate you from start to finish.

Exposing your soul and most intimate fears to the world is never going to make for anything less than an uneasy lesson. Such is the case here with M.S.W.’s four-track album in which he tries to package together some of the raw emotions brought on by the death of his brother. Within the inner turmoil, there must always be light and so it is on Obliviosus when ethereal wisps cushion some of the more fraught moments that lie ahead.

M.S.W. will be known to some through his inspired solo projects Hell and Cloud on which he frequently finds solace within the doom demographic for writing about the all-pervading sense of hopelessness that sometimes enters his darker inner psyche.

Within Hell and Cloud, M.S.W. has created melodious sequences to counter the restlessness and rage that never seems too far away. On Obliviosus, M.S.W. has used his own name to create a sumptuous stage on which to present these four new songs.

Perhaps it is no surprise that Obliviosus carries elements of Cloud’s atmospheric melodies intertwined with the more forthright doom delivery of Hell. On this occasion, though he does not walk the streets of despair entirely alone, reaching out to empathetic artists, all of whom have made their own presence felt in this moving release with Gina Eygenhuysen’s violin at times wielding the power to single-handedly open tear ducts.