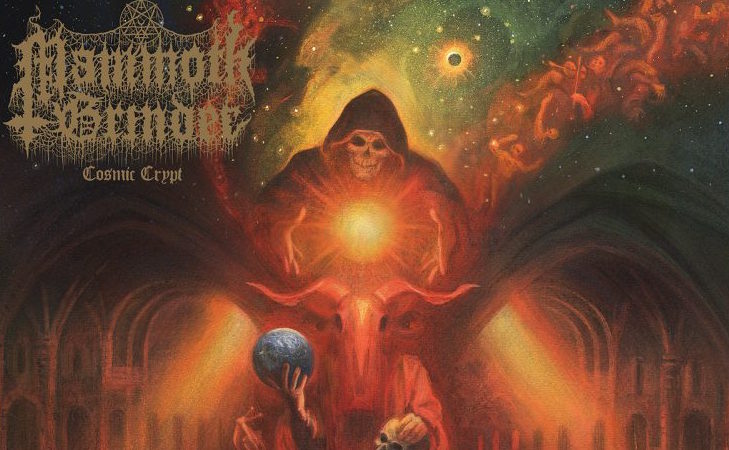 Life sucks, Mammoth Grinder rules. I mean come on, what else do you fucking want from me? It’s 2018 and we are constantly bombarded with everything from videos of starving polar bears to the resurgence of Nazis; and you know what? We deserve to see it. Fuck us and everything we have done to this planet; our shitty consumptive habits and inability to kill off baby boomers have more or less placed us in a dystopian hellscape. As a whole, we’ve fucked this place into oblivion and didn’t even bother to give it a reach-around. Luckily, death metal punx Mammoth Grinder are here to stimulate us all via riff-around as the end times come. For those that don’t know me personally, I’ll let you in on very deep, dark secret of mine. For about a solid month, I planned to kidnap Chris Ulsh, keep him in my closet and force him to play old Hatred Surge songs with me. I was gonna play bass, he was gonna play guitar – we were gonna be fucking sick. It was gonna be like a death metal/power violence version of that shitty Stephen King book (I know you know what I’m talking about). My friends talked me out this plan however, mainly because if I were to go through with it we would not have Cosmic Crypt to worship and I’d be serving some pretty hard time.

While Underworlds and Extinction of Humanity are absolute bangers, Mammoth Grinder brings their sound full circle to adequately represent the strong careers in heavy music the three members have had. Chris Ulsh took no chances on this album and recruited fucking legends Mark Bronzino (guitar) and Ryan Parish (drums) to pulverize us all into a sonically induced coma. 1.HAITI – Voodoo
Under the influence of narcotics, I follow the rhythm of psychedelic drums, where the dance, death and sacrifice can wake up the dead body from the ground and no other can speak with them like Baron Samedi – A Loa of the Dead.

3.SCANDINAVIA – Ship burial
Strength, pride and bravery are sailing to Valhalla under the wings of valkyries where Odin is waiting for them. THREE: TRIBULATION Down Below

Truthfully, Down Below is nothing short of a bold masterpiece in an already incredible discography. It brings back the Tribulation trademark of eerie melodies and catchy hooks that paint vivid pictures of Vlad Tepes’ castle and Elizabeth Bathory’s bathtub, but makes even stronger efforts on the essence of dynamic song writing. If you already love the band, wait until you see what they can do with some time under their wings. As with previous records, they experiment with a new logo, new ideas, and new sounds that really build on their craft each time. It’s an album that already has me excited to hear what the band does next, and this one’s not even out yet! The influences that can be heard on this album consist of everything from United Mutation to Civilized and The Repos and is very in-line with the Youth Attack style that makes the record label so appealing. Another big standout on the album are the interludes and the rejection of the feel-good 80’s horror vibe so many corny fucking DJ’s and electronic artists have capitalized on over the years. This ain’t no fucking Stranger Things soundtrack, this is the X-rated version of every slasher film you and your bootleg Cult Ritual shirt wish you could sit through. Deep Blood confronts us with the notion that the 1980’s were every bit as fucked as the dystopian nightmare we live in now. Neon colors and sexist undertones in all aspects of culture were never fucking cool. City Hunter takes us to the most depraved and vile parts the human condition has to offer and while the internet at large may disagree, the theatrics and gimmicks the band relies on (i.e. ski masks, kitchen knife with logo, etc.) add to the live experience. Sure, your Instagram streetwear youth crew band might have some hype but your live shows, album art, and personalities in general are predictable and boring. On the Contrary City Hunter’s music, performances, and visuals keep evolving and turning heads which is becoming increasingly harder for punk and hardcore bands to do without taking selfies with soundcloud rappers to boost their clout. Psychedelic explorations, drone-worship, emotive synths and orchestral flourishes, post-rock/metal structuring; these are just some aspects of the rich and multifaceted music that you’ll find on Mage. If you combine the Megaton Leviathan of old with elements of Neurosis, Boris, Soldat Hans, Promethean Misery, Disemballerina, Cult of Luna, Earth, and Jesu, you’ll have an idea of the paths that Mage treads. It is only an idea, however, and this is an album to be experienced on its own terms.

An album of depth and substance, the songs here glorify music that takes its time to be truly its own beast. Rather than providing a fast hit of instant gratification, Mage unfolds slowly over time to become completely immersive and utterly compelling. This is music to lose yourself to. Hell, sometimes it’s enough to bring a tear to your eye, without even really knowing why. The Task’ opens things on thunderous drums and fiercely slashing guitar before grinding down to a halt at around the seven minute mark when wandering guitar notes start to feel the way forward, it moves on through a slower, looser section and ends with Turner’s howling vocals above a mournful organ. The album runs over an hour and is made up of four long tracks. Not an unfamiliar thing in experimental/sludge metal but they’re not sinking down into those heavy riff-drone mantras that gain force through repetition, the tracks here shift nimbly between song-like, written sections and looser abstract passages. That SUMAC still get tagged as sludge metal seems woefully inadequate, there’s almost no sludge and not that much metal left in what they’re doing. Where other heavy epics smother and comfort you as they slowly unwind Love In Shadow moves at the speed of thought, you need to be on your toes. It rewards the attention too, the twists and turns feel fresh, surprising and alive. ‘Attis Blade’ is magnificent, again kicking off with clanging metallic guitar over deep growling bass, the vocals come briefly in just before it all starts to drift sideways, dissolving into a glorious frenzy of face melting noise, an electrical storm that blows a hole in the track before they start to rebuild in its image

Words via Echoes and Dust Our Raw Heart is a crushing and stirring doom metal affair, a cathartic album created after guitarist and vocalist Mike Scheidt suffered a severe episode of diverticulitis early last year. It shines with a rare beauty. The music ebbs and flows from ballad-like meditations reminiscent of Earth to the caustic sludge of Yob’s early records.

The album opens on a wistful note, the droning flow of ‘Ablaze’ caught between heaviness and tunefulness punctuated by Scheidt’s soulful singing. It has a solemn atmosphere and an aching for oblivion akin to the wonderful ‘Marrow’ from Yob’s previous release Clearing The Path To Ascend, but it also feels barer and painfully earnest.

Words via The Quietus EIGHT: CHRCH Light Will Consume Us All

It can be difficult to not deliver a track-by-track review when an album is only three songs long, but I do need to make a few points about each of the tracks on Light Will Consume Us All. “Infinite” is a 20-minute tsunami, building slowly from mournful guitar, then adding drums which sound like they’re being played down the hall and around the corner. As the song builds, the drums come closer, vocals gradually move from doom chanteuse to occult sorceress to black metal she-devil, and the guitars and overdriven bass sear through the mix. It all builds to a massive crescendo at the song’s midpoint, consuming us with blackened nastiness, before fading back into the depths. “Portal” is shorter and nastier, again with the vocal range of Eva Rose on full display. It pounds forth with an odd, almost progressive drumline before settling into monolithic riffs and mumbled lyrics. In similar fashion to “Infinite,” the arrangement of “Portal” is varied, albeit at a snail’s pace. “Aether” closes the album in short (meaning ten minutes) fashion and with a distinctly Pallbearer-ish feel, very melancholy in its delivery. Only three songs, but all 45 minutes are unsettlingly effective for those of us with patience. Excuse me as I reach down to pick up my brain that has been shattered into pieces! This is actually the effect that the soon to be released LP by DARK BUDDHA RISING has had on me! Unholy awesomeness, this band creates music that is is a portal into an alternative space and time where creative freedom is the Sun that nurtures our imagination to flourish.To say that I am impressed by this record would not do it justice, because DARK BUDDHA RISING’s music sounds like no other and that is REAL TALK! The new project B X CHVE X SYNDROME is sonic perfection, and their upcoming release Reworks is the embodiment of this divinity. Techno artist B (Bert Libeert) was inspired to remix one song from each of these pioneering Belgian artists. This very special project comes out via Consouling Sounds on Friday and can be pre-ordered HERE! I am getting chills as I write this, because the tones and vibrations of these sonics are moving me to my core. By nature I am a pretty positive person, but with everything that is going on in the world politically, I need music like Reworks because it’s so inspirational! What do I want from these artists? I want them to work together more – two songs are not enough, I need at least 8 songs like these.