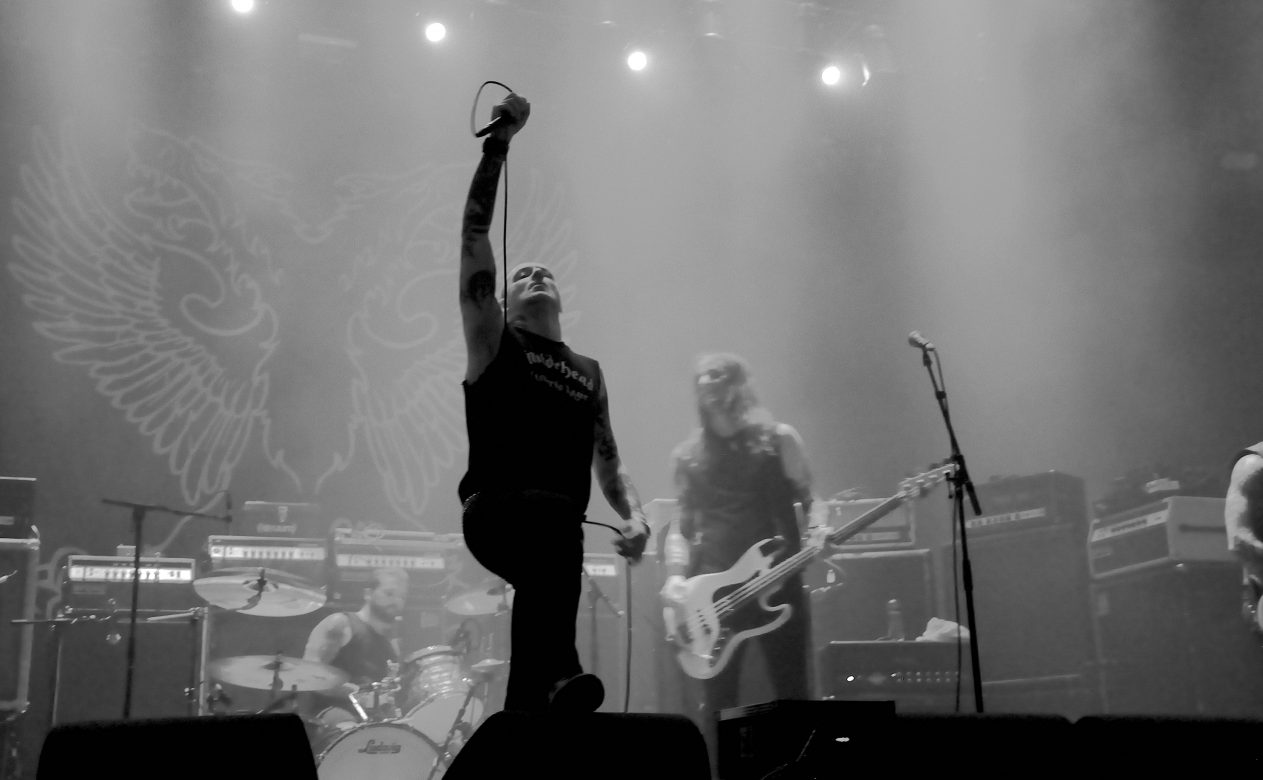 I talked with Wolfbrigade during the Southern Lord Festival in Amsterdam about Run with the Hunted and the future of the band.

Punk has always been an act of rebellion. Since you started playing in 1995, the situation in Europe and the world has changed drastically. We’ve seen the rise of fascist governments, terrorism and the fear of other religions. Does this affect your view as musicians? How so?

Not really. It affects our daily lives because we think about it. Sweden is changing politically as well, with the right wing and shit. And you see refugees coming to Sweden and everything changing, but not our music or lyrics. I would say our early records had more of a political view than when we turned into Wolfbrigade in 2000. Now, I think, we’ve gotten older. And we are still as angry, but we write with a different angle. The lyrics we write now can actually mean more than one thing. It’s like when you listen to it, you think about the lyrics in one way and we think about it in another way. It’s written from a more personal perspective. Everything is about society and the world but we don’t point at it the same way.

How long did it take to release this album? How does a typical Wolfbrigade song come together from beginning to end?

We had few songs from Damned and a few demo ideas. Then we got a new drummer. So, I think it took about half a year to complete this album.

Run with the Hunted is the title of a poem by Charles Bukowski. Is that a reference to the American writer?

We read the poem and actually borrowed the title from that. We had it as a concept for a song title for a long time, but then it just fit the album. I think it’s a really nice poem as well. There’s actually a reference to it in one of the songs, as well. I won’t tell you which one, though. You’ll have to find it yourself. Lyrically what inspires you?

Everything. Especially movies and books, everyday life. We usually write the music first, so then the sound of the song more or less inspires the lyrics. We try to figure out what the rhythm should be like in the song, and we try to find the right-fitting words for the chorus and stuff like that. We usually find a title and a theme. It’s always some sort of criticism about things that surround us. We just don’t sing about it as angrily anymore or in the same way. We try to do it a bit more like poets. The song is like an instrument for us as well. How it sounds is as important as the other instruments. We start out with the lyrics and then we change shit, because we want it to sound massive. It’s also cool because, with the last two albums, people interpreted the lyrics so differently. Some might think one song has war lyrics and others think it’s totally something else. People take the lyrics for themselves and it becomes more personal. And that’s something we really like about it, because it’s very easy to stand and point. You know, at the shit that’s out there. But let’s try to do something else with it. We’ve heard a lot of different ideas about the song. That’s why you don’t want to talk too much about it because if it means something else to them… We want you to feel something from the songs. That’s the most important thing. We want it to be a rush of energy.

Wolfbrigade has a tormented history. You changed your name, several members left, you split up in 2004 and then you got back together in 2007. How do you feel now as a band now?

Stronger than ever. With our new drummer, Tommy, a lot of things have changed and we got a fresh start. We haven’t changed that many members for a band that has been around for 22 years. We’ve changed three drummers, one bass player and one singer. For a 22-year-old band, I don’t think that’s a lot. A lot of people write about us now in that way, about our history. But it hasn’t been that weird, really. Johan came in when we had another project, just when we stopped Wolfbrigade. We started a new project and released an EP. Then we felt like we missed the d-beat stuff. We did two songs live and got the taste for it.

Are you planning other releases (like an EP or Split) or are you working on new material?

We’re going to start a few new songs. And we’ll see where it ends up. Since the 80’s, Sweden has a significant history related to d-beat, crust punk, with bands like Anti Cimex, Disfear, Martyrdöd, Skitsystem and you. Why do you think your country is the cornerstone of this kind of music?

It’s dark and cold. And during the 70’s and 80’s it was quite boring and depressing to live in Sweden, when you look back at it. At that time we didn’t reflect on it because we were young. There was like a strong, left wing community with socialist ideas, similar to what the punks we’re doing. We also had lots of opportunities. You could basically play music for free. The government paid for rehearsal spaces, which made it possible for a band to evolve and keep doing what they did for a long time, because they could afford it. It was possible to be unemployed and survive and play music. The punk scene exploded in Sweden a bit later, in the early 80’s. And we had this kind of left-wing, prog music, but it was boring for teenagers. They needed something new and then punk arrived. The early bands in Sweden just got aggressive. And so did the Finnish bands. They just got faster and noisy. And in Sweden Anti Cimex was one of these bands.

If you could choose an artist or a band (dead or alive) to share the stage with, who would it be and why?

We would like to share a stage with Lemmy (Motörhead). For a long time, we wanted to do something with Freddie Wadling, the singer of Cortex, but he passed. He was really cool. We talked about it for several years but it never happened. It was supposed to be on the first record, we don’t know why it never happened, really. Your live sets are always so energetic and powerful. How important is the connection with the audience?

It’s super important, of course. They give us back a lot of energy and if the crowd is still standing there, then we have a big task I guess. That’s what a live show is about: the connection with the audience. We don’t go out there and smile; we give an aggressive show. But that’s our music. A lot of people tell us, “But you’re so angry.” Yeah, but we play this kind of music, it would be weird if we did. I can’t even go up and smile on stage because I release a lot of energy, both positive and negative. I get all this shit out of my system. And after a gig, I’m happy for a week. It helps me to survive I guess.

What do you see in the future for Wolfbrigade?

Make a new record sometime, and keep on playing music, doing shows, aside from our regular lives. We’re going to be there for a while. Except for the hiatus of two or three years, we’ve been together for 22 years. We’ve played together the entire time. We are as inspired as we have ever been at this moment. Maybe it’s because the world is shit right now. There are so many things that affect you as a person and music is our way to deal with stuff I think. And also a way to run away from all this fucking shit. We go down to the rehearsal studio and it’s just us, a unit. We are Wolfbrigade, and best friends. D-Beat and crust punk with Annapura

Annapura is one of the most iconic bands from the capital city in Mexico. Having toured the west coast in USA, and Mexico several... 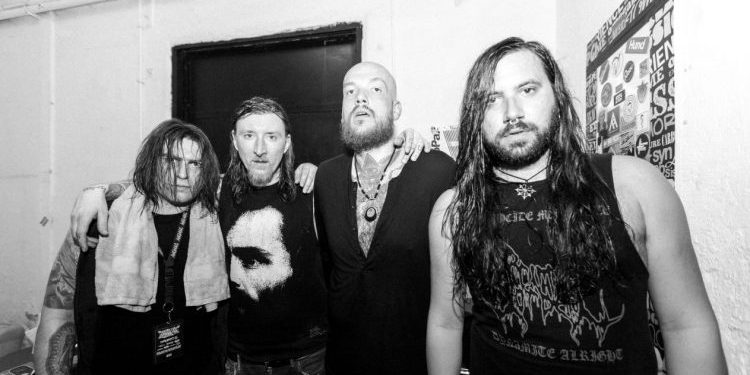 Venice Hardcore Fest is one of the biggest underground festivals in Italy. This year the line-up was insane with so many different bands from... 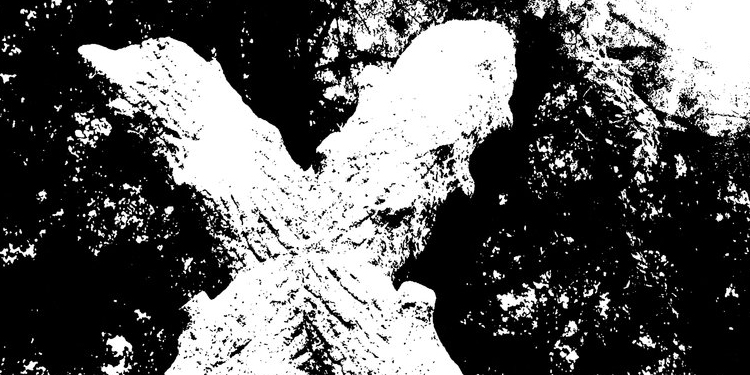 There’s a hollow ring to the concept of “supergroup” in a scene that prides itself in opposing mediocrity and sensationalism. Tearing down that often...

Southern Lord hosted a special event in Amsterdam, home of their European office, as a celebration of the label’s diversity and ever-expanding roster. The label...