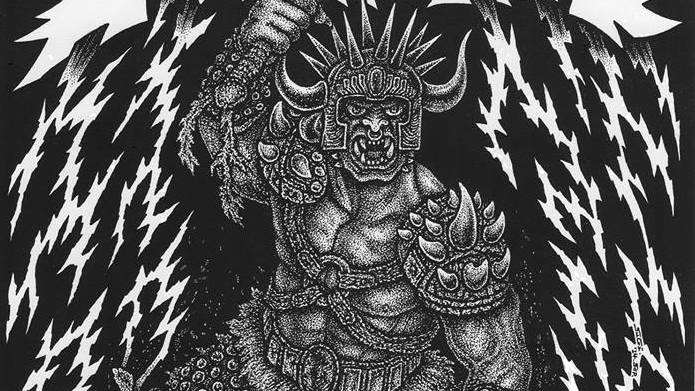 Tolar is as elusive as the shade in Texas. After over a decade of playing together and an eight year recording hiatus, they released a demo in 2015 that reminded the metal and punk scenes of their potential to obliterate. A fusion of hardcore punk, black metal and death metal, Tolar has carved its own niche at the intersection. We caught up with Chris Bonner and Dan Granado after a blistering set at Austin Terror Fest to talk about the group’s Japanese influences, Texas punk and the beginnings of an upcoming LP. Your sound isn’t inspired by just one genre or band. How do you choose, or do you even consciously, which elements to incorporate from all of the inspirations you seem to have?

Chris Bonner: First and foremost we always want to be a punk band. Bands like Anti Cimex and Driller Killer. A lot of Scandinavian d-beat, metal punk shit is in the forefront. We really love Bathory and Bolt Thrower. Slayer. We’re all really big into old-school, new wave British heavy metal. Old school heavy metal and shit like that. But, at the core we always want to keep it punk because that’s where we grew up, even though we grew up in metal too.

There are so many bands that have the label “new old school death metal.” Once or twice online I saw that applied to you guys.

I did! I definitely don’t hear that, but what are your thoughts?

Dan Granado: I appreciate that. We’re heavy. I guess that’s what they’re trying to say?

I’m fairly new to it, but there’s such a huge Texas metal scene. Did that, or how did that, inspire you when you were younger?

Chris: Uh, not at all. We were more into hardcore punk and stuff like that. Bands like World Burns To Death and Spazm 151–our hometown bands. Stuff like that.

So it wasn’t Texas metal bands, it was Texas punk bands.

Dan: There was a stronger pedigree of hardcore punk bands that inspired us to play than there was metal bands.

Chris: This is probably not cool to say, but me and Dan liked Pantera as kids growing up. A lot of other people hated that, you know?

Dan: All politics aside… There’s Florida death metal and New Orleans has the sludgy vibe. Do you think there’s a Texas sound at all?

Chris: As far as metal goes?

Metal. Punk. Anything you’re into.

Chris: I think there’s totally a Texas punk sound. The Texas punk sound is just ripping, fast, d-beat punk. A lot of Texas bands take a Swedish influence, I think, as far as d-beat punk and stuff like that goes. There’s definitely a Texas sound. Listen to Spazm 151 or old-school bands like The Dicks.

I couldn’t find any of your lyrics online. What do they focus on?

Dan: I think with Davo, our singer, most of his lyrics focus on personal problems and psychosis and a little bit of political stuff. Mainly socio-political stuff. He’s not trying to solve the world’s problems.

Dan: Yeah, keep fighting on. Rise to the top.

Chris: “Rise to the top, stand in front of the bastards.” That’s a lyric.

Isn’t that your motto?

I knew I saw it on something!

Dan: I think the reason why it is is because I always thought about how metal bands and punk bands would have shirts with names of songs and phrases back in the day which I thought was really cool.

Chris: Not just that, we take a lot of influence from Japanese hardcore.

Yeah, because aren’t you guys bigger in Japan, or more so than here?

Chris: Yeah, like with our other bands, we’ve toured Japan three times. We love Burning Spirits bands and Death Side and Crude and all that. And all of those lyrics are very positive. Like, you can fucking do it! Smash the world. We really love that. We grew up in the country. Redneck kids. When we first heard Crude and everything, we were blown away–never imagined we’d tour with them like four times! That was awesome.

This has kind of been an on and off project for a while, right?

Why is that? And are you focusing on it now?

Chris: We’ve always played in a lot of bands. Our core group of dudes: me, Dan and Davo, especially, have always played in at least three or four different bands all at the same time. Right now, me and Dan’s other band, Obstruction, which is like a hardcore punk band, we’re doing a lot of stuff. About to go to Japan. Just had some records come out. Our other band Steel Bearing Hand, which is like a metal band, is doing a lot. I don’t know, we love Tolar too…

Dan: It’s kind of like when the time is right. It’s always about timing.

So it’s not the main focus?

Chris: It’s all of our baby. We have tons of babies and love them all!

Dan: If there’s one thing to be said about Texas bands, it’s kind of a thing that there are a lot of the same members in bands.

Yeah, just this weekend I’ve noticed a lot of overlap.

Chris: Between Tolar we probably have ten bands. Active. And a wide range of genres too.

That’s another thing I’ve noticed! It’s not like everyone is in five death metal bands.

Chris: Right. You’re in a punk band, You’re in a death metal band… Like, he (Dan) plays in an Oi! band too.

Dan: We play everything. It’s on the other end of the spectrum for sure. We just like music. So when one thing isn’t doing something then another project’s doing something…

Chris: And with Tolar right now, we probably won’t play again for another 8 or 9 months. Just because when we reformed this last time, personally, I told everybody that I didn’t want to play a lot of local shows because we get in that bad habit of playing every weekend. We love to play live but right now I’m like, I want to record and put out an album before we play a million local shows.

Dan: Focus on writing. Plus we have that Japan trip too.

You guys have never done an LP, right?

Chris: Yeah, you can’t find it.

All I could find online was the demo!

Chris: We went back in time and deleted MySpace. No, yeah, we do have records out there.

I should’ve kept that…

Chris: Yeah, there is a full length out there. You really gotta search for it. It goes for about a million bucks on Discogs right now.

Okay so I have to save. Well then, do you have plans to record another full length album?

Dan: Going into the repeat factory. Get back to the fuckin’ garage and write some shit. Focus on that for a little bit.

Chris: And then find someone who wants to put it out. [Laughs] That’s the second half.

What are your plans for the rest of the year?

Chris: With Tolar, writing and recording. Outside of that, my other band Steel Bearing Hand is playing a bunch of shows with Witchaven coming up. Then me and Dan are going to Japan and South Korea for three weeks in September to tour with Obstruction. Hardcore punk. What bands are you all in?

Chris: I’ll give you my bands and everybody else’s are whatever. [Laughs] Me and Dan play in Obstruction together. Tolar. Steel Bearing Hand is the other band I do. Wet Leather, which is like a British heavy metal band.

Dan: Pissed Grave, which is like Disrupt style, Ent worship. Obstruction with Chris, of course. Tolar. Lethal Dose, which is my Oi! Band. What else? Is that it? I don’t even remember.

Chris: Our bass player plays in a Western country band with our guitar player. Here he is right here. This is Joel. He plays in a country band called Convoy and the Cattlemen.

Dan: He’s the more interesting one.

So you cover every genre possible basically?

Joel Adamson: No. not yet.

You just need a rapper to break into that scene.

Joel: It’s not really the rapping we have a problem with. We all rap. We don’t have a DJ.