For almost twenty-one years, Brooklyn born tattoo/painter Jon Clue has been channeling visions straight out of the Necronomicon itself. He has created pieces that invoke a sense of twisted worlds beyond our grasp, and of sights best left unseen. Jon has amassed a reputation within the tattoo industry for his attention to detail and imagination. Even after two decades, Jon has continued setting the bar high for himself and his own artistic revelations. Jon is currently working out of East Side Ink in Manhattan, and he was kind enough to sit down and provide us with a glimpse into his art, his tattoos and his thoughts on black metal. Having been a tattoo artist for almost two decades, what keeps this business fresh for you?

There are a ton of reasons that keep me coming back. Mainly, it’s just a burning drive inside me that says, “You’ve gotta keep doing this”. Just a part of this robot brain, I guess. It’s constantly evolving, there’s new magic happening pretty much daily, and now with things like Instagram, it’s almost hourly. I’ve been able to watch this industry evolve over the last twenty years. Seeing all the things that are happening, watching what new people are doing and how fast they are learning is definitely inspiring. That’s what keeps me wanting to stay on top of what I do. Constantly having people cycling through, going from people that were looking up to me, and now I am looking up to them.

Over the course of your career, you’ve done countless pieces and worked with with a number of other artists. Was there a certain shop or even another artist that really pushed you to the next level and helped you to come into your own?

Yeah, one hundred percent. 1995, I guess two and half years into my tattoo career. I started getting tattooed by Guy Aitchison, who was already well established within the tattoo community. Getting a lot of attention for doing some surreal, bio-mechanic, very H.R. Giger influenced stuff. He was one of the bigger names in the industry at that point in time. I ended up linking up with him. After a few times meeting up and hanging out, I ended up working at his shop and relocating to Chicago. We ended up doing a number of conventions together, and it definitely opened up some doors for me. Got me to really start pushing my boundaries at that point. Definitely that was an influence and mile marker for me. Since you started, have there been any huge changes over your career that have affected the tattoo business?

One of the biggest changes I’ve seen in my years in the tattoo industry is whole concept of “Tattoo TV.” Which, in my honest opinion, is the worst thing that has happened to this art form. Mostly because of how tattooing is portrayed and the amount of added drama for the masses to relate to. It has given clients the expectation of something that is absolutely unrealistic in tattooing. Also, the very worst thing about “tattoo TV” is how many people that should absolutely never get tattooed and are now wanting something tattooed. For them, I say this, “It’s not for you; get your nails done or go buy a new air freshener for your Mercedes. THIS IS NOT FOR YOU!” Keep tattooing underground.

Because of this boom in “Tattoo TV”, what has changed in regards to the clientele that comes in?

People now think because a full sleeve was documented over one hour of a television episode, that sleeves can be done in a couple of hours. They look at you as if you have a massive tumor growing from your forehead and bursting in their face as you tell them it could take up to 50-60 hours, depending on the subject matter and amount of detail. A lot of my clients come in and are expecting me to still do these big, crazy, elaborate, bright, colorful pieces. I’ve been really pushing hard to do deep colors. More muted and earthly looking.

With two decades of experience under your belt, what do you look for when you design pieces for people now?

First and most importantly is to not make it look like anything that anyone else has done. I don’t look at references from other art. I look at only references from life. If there’s something that doesn’t exist in life, then I will try to find something in life that resembles it, then do my thing and make the rest up.

When you originally started off, you were known for the up-and-coming “new school” style of work, but as the years went on, it seems you started to shy away from that, focusing more on cosmic images, bio organic and even darker pieces. Were you trying to break away from the pack? Or was it a natural progression as you broadened your horizons and skill sets?

Yes and no. When I very first started, all I was doing and I wanted to do was just black and grey. Dark, scary, evil stuff. The very first set of flash drawings I did at the first shop I worked at was just wizards, skulls and dragons. All black and grey. Then I started doing color stuff and it clicked, I guess. A lot of the graffiti influences that I had when I was kid started coming through. I used a lot of what I learned from doing that stuff and made some nice color tattoos that people really liked. I got a lot of recognition for the color stuff early on, so it was easy to feed that and keep that going. But after all this time, it’s like ‘Hey, I want to get back to doing this stuff that got me into this.’ That’s another one of things that keeps me going. Constantly looking for ways to reinvent myself. To stay current with tattoo trends, but also stay true to myself.

You do a fair amount of oil painting as well correct?

Mostly oil on wood. It was oil on canvas for awhile but after painting on wood a little I found that it was definitely the surface I enjoy the most. It works the best for me.

Do you feel that this is more rewarding than tattooing after all these years? Or have they become intertwined together from an inspirational stand point?

One pushes the other. Each satisfies my own needs artistically. Tattooing definitely pays the bills. I do tattooing for my clients, whereas the painting is for me. I don’t do commission work. I more or less began trying to learn how to paint not long after I began tattooing. A lot of my first paintings were very simple and embryonic. Once I learned how to utilize the medium to get the desired effects…I started to notice a creative volley between my tattooing and my paintings. Each would satisfy a similar but different need for me as an artist. The paintings are done solely for my own gratification and always consist of the imagery I see from behind my eyelids…I only do stuff that I see in my head, the demons that I need to release. A lot of the paintings are influenced by the tattoos. I will do a tattoo and see a couple of things that I like and want to incorporate them into a painting. A lot of the time, the paintings are started as a blank board, then I prime it, and start making a picture. Whatever happens, happens. Tattoos and extreme music almost go in hand in hand, it seems. Social rebellion and a flagrant dismissal of social norms are staples of both mediums. In what way do you feel extreme music has influenced your style over the years?

Some of the earliest artwork I ever did was influenced by heavy metal records. Especially Iron Maiden covers. Derek Riggs was one of my heroes as a kid. Listening to heavy metal, punk rock and drawing record covers was all I did. If it wasn’t for music, I probably wouldn’t be doing what I do now.

Growing up in Brooklyn gave you access to the legendary New York hardcore scene. Any memorable moments or shows that you would like to rub in peoples faces?

Man, I’ve seen every New York hardcore band there ever was at CBGBs. Just to say that I saw Agnostic Front and Token Entry at CBGBs in, I guess probably, ’86 or ’87, is pretty crazy. I was lucky to be born at the right place and the right time.

Do you have anything music-wise simmering on the burner at the moment?

Let’s talk black metal for a moment, as I know you’re a rabid fan of the style. Over the course of its existence, we’ve seen a number of larger bands from the scene morph into a more commercialized and easily accessible products. There has even been a shift away from the more traditional sound of black metal over the last few years. Is black metal in trouble of growing stale?

I think people are sick of Darkthrone worship. There’s a lot of good musicians that are trying out the black metal sound, which isn’t what black metal is about. I mean, I kinda like the idea of people straying away from the Darkthrone worship these days, but I also think that it’s being diluted by people who don’t understand what black metal is and just want to jump on the bandwagon because it’s in style right now. Its kinda of frustrating. A lot of cool things that happen get taken by people to make as much money as they can, and then leave it for nothing. Black metal has been around for a long time and it will be around for a long time. There are gonna be people who really enjoy the sound of black metal and follow that. There are always going to be bands that want to sound like something. It’s not just about the sound or the look. It doesn’t matter if you have corpse paint on. Its about an atmosphere and an attitude. A way of understanding life that makes black metal what it is and should be. Not to say its a lifestyle though. Its a way of thinking, Its a mindset. Does Black Metal need to evolve to keep it fresh and relevant to the metal sub-culture? Even more so, do the purists of the style need to expand their horizons a bit? Maybe worry less about what is “kvlt” and more about keeping it interesting and pushing boundaries?

There’s definitely room for expansion of the sound. It needs to be done in a certain way, though. There’s this band Ominous Resurrection who are doing a very bold exploration of the sound. But it’s right on point. Negative Plane is another band. They have been around for a long time and are really pushing the boundaries of what people think of as black metal. It’s different. But it’s still as dark as you would expect a black metal band would be.

Anything that you’ve been listening to lately that has been blowing your mind?

Lately, the newest Ominous Resurrection, which is being pressed right now. Not because they are my boys, but because it’s really that damn good.

Awesome man, I will definitely be checking that out. Thanks for sitting down with me and providing the photos. 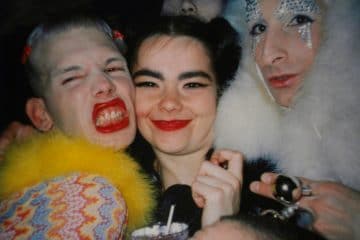 Before the murders! New York Club Kids on Geraldo 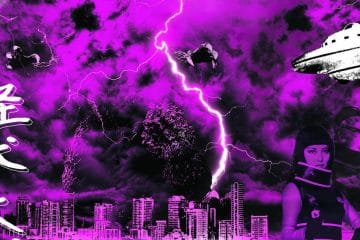 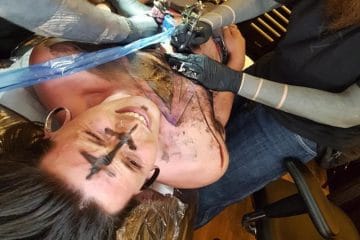