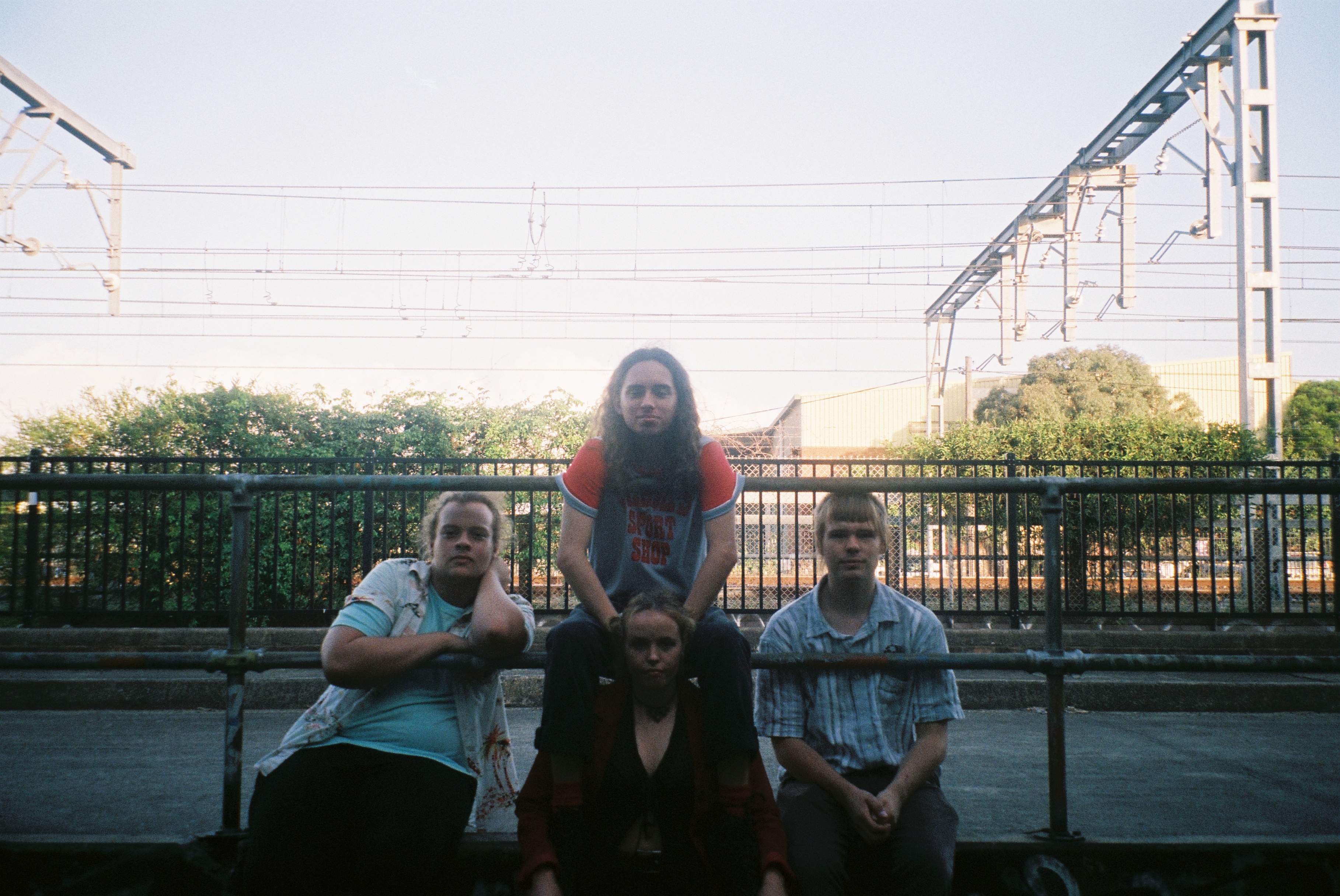 I sit in Jack’s bedroom. The walls covered in posters of local shows he’s been to as well as his own artwork. This is the room that Concrete Lawn practice in. There’s a drum kit, 3 amps and a bed. It’s no bigger than your average 18 year olds bedroom in the inner suburbs of any city. Maddison stands on the bed and screams into the microphone. Luckily Jack’s neighbours don’t mind the noise and him and his bandmates can play in here almost whenever they’d like to. Jack’s art is a kind of absurdist, psychedelic look into the psyche of a child. Though his maturity shines through in how self-aware he is. Maddison is still in high-school. Onstage her presence is fierce and loud. She takes over the whole stage while the boys stand back and just play the songs. The median age of this band as I write this is 17. The music is uniquely adolescent. It reminds me of a time where bands like the Adolescents who at 16 made one of the best hardcore records ever, could make punk that lasted. The brattiness of Maddison’s vocals and the chugging bass lines of Jack remind me of The Bags, a band that the couple site as an influence on Concrete Lawn. This demo is like if The Bags loved Black Sabbath and came from a rural coastal Australian town like Wollongong. You can also hear the influence of modern garage stuff like the Goner Records catalogue (like Nots but not as angular) or the barefaced influence of Sydney’s world famous Royal Headache. We chat about music we like and I tried to get an idea of what it is like to be a teenager in an ageing Australian DIY scene. What are your songs about?

Maddison: Our songs are a reflection of our band name; the future, societal views and experiences. For example, “Dog eat dog” is about feeling drained in a society based on competition. I believe everyone is destined to succeed, yet society leads us a stray by having us turn against one another and pushing separation. Community over competition! In opposed to “Dry cleaners” which is just a typical song about a failed relationship haha.

Jack: Maddison can speak to the specifics, but I definitely associate a general cynicism and angered defeatism with most of our songs. I always think our name plays with ideas of gentrification.

How do you write the lyrics? Who writes the riffs? I like that they resemble a lot of things I grew up loving… especially when I was your age! The Bags, Sabbath, The Stooges… those were all bands that changed my life and perception of music and art.

Jack: Maddison does all the lyrics, and we all try to write riffs around them. Often guitar and bass play similar things so they are fairly collaboratively written.

What is it like being so young in punk and in Sydney?

Maddison: The punk scene is booming in Sydney at the moment. Especially the punk bands with front women such as in Sook, Quick fix and Amyl. It’s a perk to be young and apart of a movement against capitalism, as our generation is becoming more politically aware. Plus, just as Jack mentioned we’ve had an insane amount of support which has truly helped Concrete Lawn mow through the music industry.

Jack: I think its easy to be really jaded but i don’t think that is specifically Sydney related. On the flip side actually we’ve been supported by so many people from all over different Sydney scenes which has been great.

I think also being young and making music like this, which is hooked on a teen idealism of sorts, is really rewarding and welcomed. As opposed to if we were like 60 and making the same music. I guess being young grants us immediacy, not sure. What’s your perspective of where we are in 2018 in music scenes?

Jack: I am pretty ignorant with music scenes beyond the underground punk scene here, so I could be way off the mark, but I definitely feel surrounded by great role models who are seeming to begin to really consciously champion vulnerability in music. Hopefully 2018 is the year of jock punk becoming obsolete, also its thinly veiled counter-part in ‘party’ punk. Creating accessible spaces that challenge broader dominant power systems is something that is seemingly beginning to happen, but we aren’t there yet. Hopefully positive things for the future.

I find when I’m working on something new I look really closely at the stuff I love so much, especially movies and TV. What is some stuff in those areas that you like a lot? Does any of that stuff influence Concrete Lawn?

Maddison: The documentary The Punk Singer helped influence me, as Kathleen Hanna really works the stage. She is just a fierce goddess who speaks her mind and goes absolutely berserk…it’s sick!! She definitely gave me the confidence and inspiration to get up on stage and just let go and do whatever the fuck I want without subconsciously questioning what others may think about my performance.

Jack: My favourite film is Paris, Texas but Concrete Lawn currently has no slide guitar so I doubt it.

Jack you’re quite the visual artist… what role does that play in the band?

Jack: For me all of my creative pursuits are a similar series of mental processes with different physical outcomes. I guess making punk music engages similar ideas and concepts as my art does, which I often use to orientate myself within the world. On a more practical level it means I design fliers for our shows. What is a concrete lawn? Why is your band called that and you have a song with the same name?

Maddison: To me, the name 100% represents the future. As soon as Campbell mentioned the concept of Concrete Lawn (which is a song stolen from his cousins band the sneaky bastard) I was completely hooked. Concrete Lawn symbolises our future and how our society is transitioning into a more urbanised state. Which is resulting in deforestation (cheers palm oil) and overall, the destruction of the natural world.

Jack: I have a thing about bands with theme songs, I think its crucial. I always interpret the name as a riff on sleazy urban development, which I guess we are defining ourselves both against and in the shadow of. I think the name comes from a song of the same name by the band East River, which was Campbell’s (our guitarist) cousins band.

Do you guys play in any other bands? What do modern stuff are you listening to and really like?

Jack: I play in another band called Dual Citizen, reflected in that is definitely my interest in the whole Sydney drum machine and chorus pedal fetish. Think Sex Tourists or Orion.

There’s also heaps of exciting and broad Australian punk going at the moment that I am loving. To name but a few; Ubik, Robber, Nasho, Spotting, Shady Nasty. How do you all know each other?

Jack: I only know Alex and Maddison through the band. Even Campbell, who I met at a show, I’ve only ever really hung out with in the context of making music. It’s cool, we’re definitely friends but we are connected through music. In many ways we are heaps different people, all at probably fairly different stages in life, which I think makes playing in this band a really dynamic and cool thing.

Jack: For me it’s creative compulsion, still stuff that needs to be done.

Some people think that guitar music is dead and we should all be using drum machines and synthesisers… an old hardcore friend of mind calls this the new ‘trend’. What do you think of trendy music? Like stuff a scene deems as cool or important? Can music scenes be elitist?

Maddison: Music scenes can for sure be elitist just like everything in society that is governed by the pyramid structure. You only have to listen to Rebecca Black’s song Friday to realise some artists can pay their way to become recognised.

Jack: I’m always way off trend and am pretty good at missing great stuff. Elitism is definitely there but, as with trends themselves, I am pretty oblivious to it all. It’s definitely part of the shit culture that needs to be stamped out of punk though.

What do you look for in music you like? Do you apply the same thinking to your songwriting?

Jack: I like music that is honest, I get really sceptical of overly emotional songs. I tend to favour cynical and dark music, it doesn’t feel as contrived. I also don’t like art that is arrogant enough to try and make objective claims. I favour open ended music which allows for me to come to terms with things, not be told what to think. Yeh sorta like letting a listener make up their own mind of what it’s about or what THEY want to think about what you’re yelling about.

Jack: I think our song Dog Eat Dog is a good example of this. It doesn’t really come up with any specific conclusions beyond its chorus that ‘its a dog eat dog world.’ I think theres something alienating in that, in having music that fails to navigate a certain relevant turmoil. I think it expresses a confusion that is far more relevant than specific fleeting political slogans or ideas.

Stream the demo below and get physical copies from Urge Records.

Advertisement. Scroll to continue reading.
In this article:Australia, concrete lawn