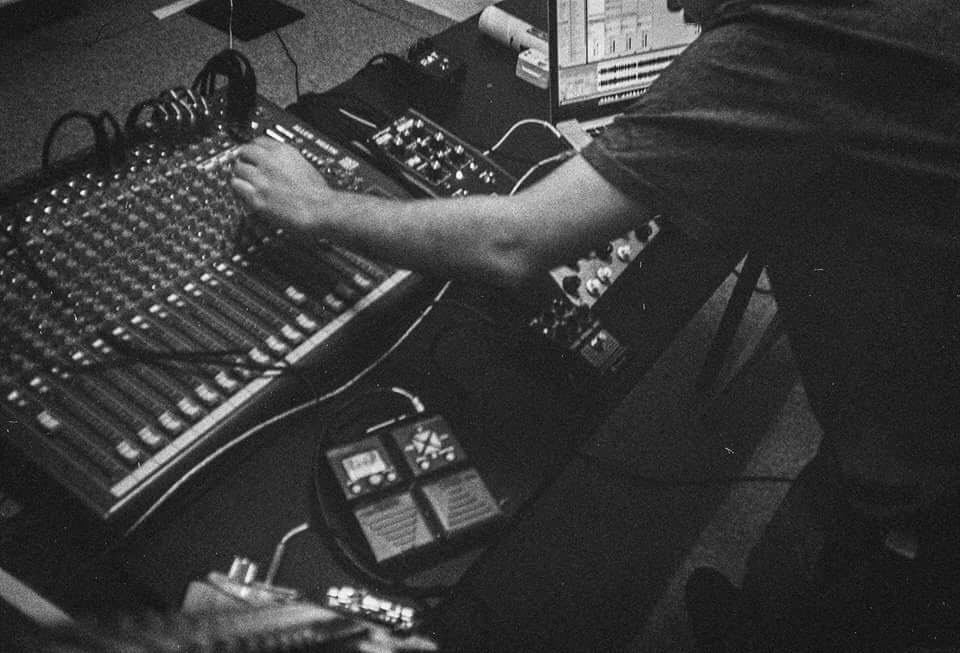 Nino Pedone is an intriguing experimental electronic artist, terrorizing the scene under the Shapednoise moniker. Having recently released a devastating EP in Deafening Chaos Serenity, we discuss his new work, his history in the scene, having to move to Berlin to express oneself and get assistance and support from a wider community, the excellent collaborations featured in the new release, his label REPITCH, which is releasing for their anniversary a great compilation this March called Dys Functional Electronic Music, and some future plans.

Hi Nino. Thank you very much for finding the time to do this interview. It is much appreciated! So, can you give a brief history of Shapednoise? When and how did this project begun?

This project mainly began when I finished my studies in Milan and I moved in Berlin around 2011, that was a period when everything start properly same time when Ascion, D. Carbone and I decided to work together on REPITCH Recordings. Subsequently the project materialized step by step and it is certainly a decisive moment within my first album on Hospital Productions and after with my records on Opal Tapes and Type these records shaped me in to the producer that I became.

You are originally from Palermo, but you currently reside in Berlin. What was the reason for moving to Germany? How different do you find the music scenes of the two cities?

The main reason I think is cause here in Berlin I feel much more free to express myself.
The main problem in Palermo is that even if you have a really good idea and you bring something new and innovative in the music scene, you can’t. You can’t cause there isn’t any kind of support from the government, on the contrary they only create obstacles and there are a number of logistic and organizational problems that make you never want to do it all. In Berlin, it is much easier and there are more possibilities and people in the city they can appreciate when someone wants to bring something new. At the moment, the music scene in Palermo is almost inexistent and I’ve never played in my town. I have read that your background is on sound engineering as well? How did this discipline help you craft your sound as Shapednoise? Did it open new possibilities and, kind of, eliminate obstacles? So, today it is easier for you to achieve certain results?

This discipline, of course, helped me a lot in reaching what is today the Shapednoise sound.
Also, it made me start thinking in a more mature way and understand the direction I wanted to take with my music. I think many people must understand that working as an electronic music producer is not just about creativity and fun, but we must also study and work hard, and you never stop learning new things.

As a more technical question. What is your setup? Which DAW do you use mostly? What instrument software? Which is the one (it could be more) effect/synth that somehow always finds its way into your signal chain?

My setup is a hybrid between the digital and analog approach.

I like to start from a simple source and after doing some extreme sound sculpting, by applying heavy sound processing to it with an analog or digital chain of effects in order to give the original sound a completely new, and often more complex aural shape.

I usually like to work with Ableton live and Pro Tools – Pro Tools mainly for mixing and recording while Ableton for producing.

Well Distortion and Reverb for sure….

Your debut record came out through Hospital Records, the label of Dominick Fernow (Prurient, Vatican Shadow). Can you give a bit of the backstory? Where you sending demos at the time, or did they discover you?

Basically, I was already in touch with Dominick for a remix, and it was nearly a year that I had those tracks ready but I wasn’t able yet to find the right label for them.

So when I was in touch with Dominick I was thinking, I should try to send some music to him Hospital it could be a perfect label for the kind of sound I was working.

And from this, it was born “The Day of Revenge.”

Moving on to your new release Deafening Chaos Serenity. How would you compare the sound of the new EP to Different Selves? How would you describe the evolution of Shapednoise?

This is something difficult to say. OK, so for sure there is a sound aging in this latest EP compared to Different Selves – I think there is more desire for extreme experimentation.

There is a sort of manifesto included in the new release where you go in depth into the subjects of “chaos” and “order.” How important do you feel is getting your message across? Do you feel that this is an aspect that can also be brought out within a musical context? The more chaotic the music is, the more serene it becomes?

Is really important that people feel the message we want to convey with this record.

The manifesto emphasizes an interdependent relationship between chaos and serenity, which can be found also within a musical context. I don’t think the more chaotic the music is the more serenity there will be, but it is possible to have within this chaos a form of spiritual resistance able to read into serenity and peace. You also have a couple of big guests in the EP as well, Roly Porter and Rabit. How did these collaborations came to be? How different do you find collaborating with someone else on a track, rather than working on it alone?

Yes, I was really happy to challenge my self on this record through these collaborations.
Roly is an artist who has always inspired me a lot and made me understand many important things about my approach with music production.

Regarding Rabit, I know him through my good friends Mumdance and Logos, and there’s always been a really good understanding between us and he is also among the artists whom I respect a lot and that opened me to new musical horizons. So I thought it would be perfect to involve them in this record and it was a long time that I wanted to work with them. Rabit was also very helpful in developing the main idea from which the Serenity Manifesto was born.

There has also been reports that you are currently working alongside Miles Whittaker (Demdike Stare) on a new project, Boccone Duro. That collaboration sounds perfect to me? What direction will you guys move sonically? Or is it too early to say yet?

Yes, Miles is a good friend, there is a special relationship between us which is not just related to the music, but much more. We played already 2 live shows in the last 2 years, and especially the last one went very well, and I think that has defined what will be the sound of this project.

But at the moment is really difficult to tell you exactly which direction will take it, because at the moment we are still working on our first record and is a continuous work in progress.

You have also founded REPITCH Recordings, with Ascion and D.Carbone. How do you find it being both in the creative and more business side of the music industry? Does that give you a different perspective on the industry?

Well, I think if you are doing this work even without running a record label but just as an artist and you want to do this work professionally you should always take care of the business side of the music industry. For sure, working on my own record labels it helps to understand how the industry and the market work. Of course, sometimes these are very boring things which don’t stimulate creativity, but it is important to do it.

What future plans do you have for Shapednoise? Can we expect more releases soon, in terms
of EPs or full-lenghts?

I have a few new different ideas for a new album but the whole process is very slow at the moment. I hope I’ll be able to finish it in a way it could be released next year at some point.
But if all goes well, prepare for something devastating.