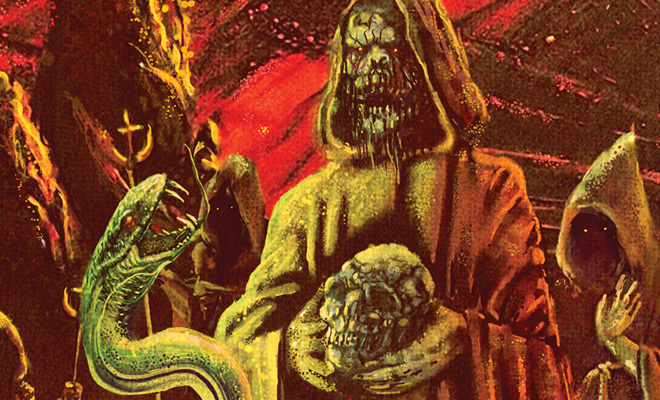 Serpentine Path’s second record Emanations drops this week, marking a pivotal evolution from the band’s self-titled debut released in 2012. The focus remains the same though – soul crushing doom laden with tasteful death metal influences like Autopsy, while much has been said of the band’s members and previous bands, including Unearthly Trance, Winter and Electric Wizard. Vocalist Ryan Lipynsky talks about how he dislikes such references but also how Emanations has come to be, Winter’s Stephen Flam joining the band and what the future holds. Your first record came out in 2012, and at the time, you were often referred to in reviews and press blurbs as a “doom supergroup”. It sometimes appeared that your previous bands were overshadowing Serpentine Path’s own purpose. Do you feel that hindered Serpentine Path from being looked at as its own entity?

Yeah, it’s not something I particularly like. It always seems to be this overblown expectation of what we’re going to be – we’re going to be the sum of all these bands put together to create one massive thing, and to me that’s not the way we’ve ever looked at it. We’ve always looked at it as the sound is the common ground between us and Tim [Bagshaw, guitar] originally. Where are we both mutually interested in? It’s obviously doom, and it would be cool to do something with more death metal influence. The idea of us being like, let’s pool together all of our experiences and create one super thing, was never the objective. Tim is the songwriter, so it’s very much a vehicle for Tim’s guitar playing, rather than all of us coming together like the Beatles or something [laughs], throwing together this massive thing.

It started off as a side project and it just grew into something more substantial. So that’s frustrating because there’s also a lot of expectations. I’ve seen some reviews where people are like, with all the hype and all the press about who was in what band blah blah blah, it wasn’t that impressive, or something like that, so it adds an extra element of expectation; but at the same time, I understand why labels do it and use that term because it gets people interested. I get it, it’s just a bit frustrating.

Your respective bands have somewhat of an influence over your sound nevertheless, but you’ve crafted one of your own. Did you approach this band, and specifically Emanations, to consciously create something that sounds different?

Not entirely. I mean, personally, I wanted to make my vocals a little bit more natural for me. On the first album I did a much more deeper, harsh vocal and on this album I wanted to use more of my natural range, because I felt I could add more to certain songs and bring it out of the death metal world and into something that I like to do. I think on the first album I made my vocals purposely deeper to make it different from Unearthly Trance, but as far as the songwriting and everything, it took a natural progression. We didn’t really set out to do anything, I think we just wanted to improve on what we first started. We didn’t want to go any slower or more doom, I think we just wanted to focus on making sure we had some good songs and good sounds, making sure the guitars complemented each other.

Stephen Flam from Winter has joined the band now too. How did he become involved and what has he brought to the band, especially with a second guitar?

It goes back to Unearthly Trance, our previous band with me, Jay and Darren. We did a cover version of a Winter song [‘Servants of the Warsmen’] that came out on a 7” and we wanted to send that record to the guys. Our friend Ron knew the Winter guys and we wound up sending them copies. They were into it and we even met John [Alman] from Winter, he came down to a show where he lived and it was really cool to meet him; so that was the initial… us being on their radar. I sent a copy to Stephen as well.

Over time, as Winter was coming back to do a reunion show in New York, Jay works at an instrument rental place and he got some gear for them and became friendly with Stephen. Through that, Jay let him check out the first album and Stephen was really into it. The conversation came up, would you guys be interested in having another guitar player? That would be perfect. He really was a perfect fit for our style.

At the first practice, he knew quite a few songs already from the first album, so it kind of immediately clicked and [was] a perfect match, because I think Winter is a band that influenced us, so it made sense that we were on the same realm and style, and tuning even.

When did he come on board? How did he fit into the writing process of what would become Emanations?

He came on pretty early; right after the first album came out. He learned all the songs from the first album so we could play a show and we didn’t even start writing for the second album until after. He’s been along the whole process. Tim is the main songwriter, but Stephen did write a song on the album that he had for years. He was involved in working on structures and all that.

What song was that?

‘Systematic Extinction’. He had some demos from years ago that he presented to us that really had the song completely worked out and we thought this sounds like a song that could be one of our songs. He had another song too but we didn’t wind up using it because of some discrepancies and he wasn’t sure if whether he wanted to use it for us and for Winter. He decided at the end that he wanted to keep this for Winter and we were like, that’s totally fine, we understand. He’s still considering working on Winter in the future so he didn’t want to cross the stream so to speak.

Given that you’re in different bands and have different schedules, has getting together to write and jam ever been an issue?

We’re not a typical full-time band where we’re rehearsing constantly and all that. A lot of it has been done over periods of time, getting together and then not getting together, and there being a month of not doing anything. I think we’ve always looked at this as a project at its core. The goal is just to do recordings. It’s kind of the reason why we haven’t played shows and stuff. It’s been difficult for us to make this a full-time band, but we never wanted to put that pressure on the band. It’s always been about doing an album.

Tell us a little about the lyrics of the new record. There’s a very depressive feel to the album musically, is that reflected in the lyrics?

For me personally, I don’t have a point of view of it being a depressing kind of thing, more of a harsh reality. Here is the way things appear to me or the way they could be. For instance, two of the songs deal with organized religion and the church, an aversion to those of ideas, rejection of all that, which is still part of our everyday life. ‘Systematic Extinction’ talks about a potential future for humans to be… not extinct, but reduced. The more people that are on this planet, the more resources are depleted, so there’s going to come a point in time where there’s going to be more of a force dominating over the people. Things are going to hit a tipping point if they keep in the direction they’re going.

There’s a song on the album that talks about a Lovecraft kind of thing, like a force from the unknown, manipulating humans from another dimension. There’s also some personal things like torments, where a person is torn between two realities where either one will make them suffer. There’s a bit of a personal feeling, but mostly it’s about harsh realities from my point of view. I don’t see that as depressing, but when you read it, it can probably be that way – but I’m not a depressed individual, so I can’t really say that. Similarly with the artwork, it also sets a tone and vibe that complements the music. Who did the artwork and why did you choose it?

The artwork was done by Orion Landau, who is the in-house artist at Relapse, and it’s kind of how they do things more or less. They like to provide artwork if the bands are cool with it. We liked what he did with the first record, so basically we gave him the songs and the lyrics and said see what you can come up with. The first idea he presented to us was very much something we were into, just made a few tweaks and it worked out perfectly. He wanted to have some striking colours and the figures on the cover with the serpent played into the title, Emanations, like coming from a singular source. It just fit in with the theme of the band. We let him just do his thing.

You mentioned that playing live isn’t a priority but you do have one show coming up next month in New York. Do you see any more live shows in the future, even just a handful?

It’s kind of up in the air at the moment. There’s a few songs on this album that we’ve never played in the rehearsal spot until last week, so it’s kind of a mixture of songs we’ve played before and some we haven’t. Even to play one show it took a bit of rehearsal to iron all the songs out. We’re going to see how this first show goes. We’ve only played one other show after the first album came out. We don’t have a grand plan, that’s why I say we’re more of a recording project because we’re not looking to get on the road for a month and tour.

I think the reason some of our other bands ended was because we felt burnt out. Unearthly Trance, we got to the point where everything was a bit too much for us. We needed to take a break from it. We didn’t want it to fall apart, so we decided let’s end it now so it doesn’t become not-fun for us anymore or a burden. With this band, I think we’re very conscious to not [do that] but I won’t rule anything out. We don’t have any grand plans and I think people are disappointed by that, but for me… we’re just being honest with ourselves. The potential of what we can do is open for the future, but for the moment we’re just going to play a handful of shows and see what happens.