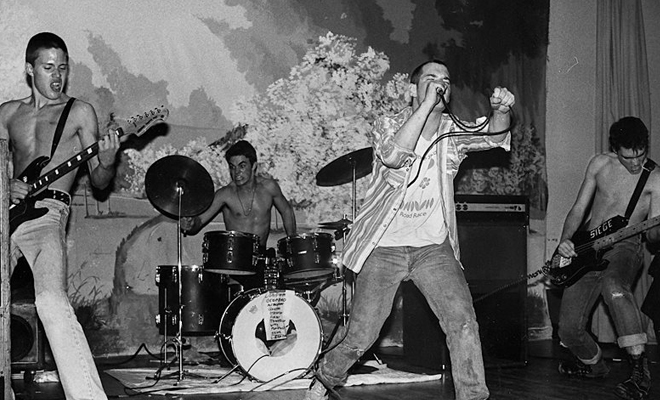 1984 – Weymouth, Massachusetts, USA – A quaint herring-run lined square in a suburban mill town outside Boston first had its peace disturbed by a new, deafening degree of dissonance blasting from a church cellar Fellowship Hall rehearsal space. SIEGE spewed raw hatred for war and conformism in the form of hardcore punk rock that has resonated in the hearts of generations of lovers of truly extreme music, through their refusal to ‘conform’ – both to their authoritative world, and to the now well-worn cliché’s of the genres they destroyed with their timelessly harsh bursts of musical protest.

30 years later, I had the opportunity to sit, reminisce, ask the questions and endure the axes left to grind by grindcore legend and SIEGE drummer/lyricist Robert Williams, as he reflected on the slam-pit glory of Boston hardcore’s early heyday, expounded on the felonious backstage debaucheries of his solo projects since, and rambled on contemptuously about his past collaborators.

Mr. Williams’ living/work space is, I’ll say, functionally filled – not hoarder-packed, but lined with loosely orderly shelves and piles of books, records, flyers, art supplies and writings; the precious detritus left from a lifetime of cultism. His desk is scattered with drafts of cover art and lyric sheet designs for the ‘anti-war opera’ he’s in the process of recording, including a photo of him sitting at a picnic table with fluorescent blue hair. His discourse is impassioned, spat from the same heavy-browed snarl we’ve come to be amused to see in pictures of him behind the drums down through the years, his responses periodically punctuated with air-drummed vertical forearm swings not unlike a certain German dictator. His house absolutely reeks of pot.

He reaches for an album with a plain cover, and I’m briefly intrigued, thinking it’s The Beatles white album, until I’m bummed to see it’s a copy of Barbara Striesand’s ‘Guilty’ featuring Barry Gibb, as he proceeds to play ‘Woman in Love’ no less than four times in succession, followed by ‘Generic Flipper,’ as we finally settle into our conversation… Interviewer Gifford Stylus – …you seem like you want to say something, so I’m going to let you start…

SIEGE Drummer/Lyricist Robert Williams – Yes, I do. I have a couple of friends who espouse this ‘liberty’-trumpeting, new right wing, black-helicopter thing, but then the minute they think they have your ear alone they go into their anti-Semitic, Zionist conspiracy hatred bullshit, so I just want to start off by saying, fuck you bigots in the fucking ass…

GS – Well, wait a minute here… there’s been quite a few band photos on a lot of your different releases that show you brandishing various firearms – that doesn’t exactly look like someone who’s opposed to second amendment rights…

RW – …that’s in tribute to my ideological heroes from the militant anti-war movement and civil rights era – the Weather Underground, Baader Meinhopf, Panthers, etcetera. Anyone who’s taken the time to fucking read any of my lyrics fucking knows that. Habelt being forced to remove Fuck Off shirt at SIEGE Battle of the Bands
Principal’s arm unplugging Marshall at right
Photo: Eric Conrad

GS – That message seems to date back a long time with you guys – anti-war, against racism…

RW – One of our friends in High School had this ‘anti-nuclear club’ and I remember the principal accusing us of being communists. This is the same guy who tried to shut us off when we played a ‘battle of the bands’ at our High School – every young musician’s dream, really. But it was the sum of a few pure honest things; us instinctually hating Reagan etcetera, and all the bands in our hometown were ‘cover’ bands and it was just fucking dreadful, so we took it out on our musical instruments. Hearing early Discharge was an awakening also, for sure.

GS – What other bands influenced you to first create this particular brand of this music?

RW – Ah, I always liked the noisier shit. Flipper, Void of course. I’ve been listening to a cd of Chaotic Dischord’s ‘Fuck The World’ Al Quint made me lately. But mostly I just listen to old disco. But to answer your question, DEVO was the band that we worshipped. That and seeing Minor Threat live. And SS Decontrol. But it was more of an attitude, then, really, as I’ve said.

GS – …and what was the early 80’s original hardcore ‘scene’ and ‘Boston Crew’ actually like?

RW – I’m sick of talking about it, really. We were from a second generation, and weren’t particularly accepted. They were bullies, drunks or not. I’ve never seen the connection between sports and punk rock, myself. There ain’t any.

RW – …we were hated everywhere we went, really. I was a drama club kid who formed the group with my horror movie-obsessed nerd buddies… (SIEGE singer) Kevin Mahoney gave the band some early scene ‘cred’, I suppose – his brother-in-law was the singer from Jerry’s Kidz. The music wound up speaking for itself, though. But we always seemed to befriend the underdogs. RW – Radiobeat was fucking killer. Some a’ the best bands were orbiting around Kenmore and the most exciting recordings in town then were coming out of there. SIEGE’s shit was recorded live, too – a lot of people don’t realize that.

GS – And Mahoney played that saxophone on ‘Grim Reaper’?

RW – Yeah, and Lou Giordano mixed the thing with the sound effects on the fly, too…it was improv’d. Mahoney was an amusing, tolerant person, aspiring poet..

GS – He must not have been all that tolerant, I mean, he didn’t show up for that last SIEGE show (in 1985 which was to be with the Necros at CBGB’s ).

RW – …politically tolerant…emotionally volatile. If you see what I mean.

GS – Uhm, I think so…anything you want to say on his passing?

RW – Other than it was an honor to rage and write with a singer that harsh, and that he was a funny bastard, no, not really…

GS – So what’s up with the outtakes gathered on this 30th anniversary edition of the SIEGE LP?

RW – The Deep6 LPs are the definitive, to me; restored sound, with the original session outtakes gathered on one final edition, corrected lyrics, which is important to me too of course, plus it just feels like the original cassette.

GS – Now…I’m sure some people have wondered – what was a band with a message like SIEGE doing with Seth Putnam as vocalist?

RW – It was a false-start reunion attempt, and I’m glad it went nowhere. Because there were some good early lessons then – never to compromise my shit, which since then, I fucking haven’t.

GS – But now ‘Lost Session 91’ from this period – this is being released as a limited vinyl, on PATAC…

RW – Yes, and I fucking hate it. Unlike our real recordings, this was one of our other members’ Berklee buddies with a portable recorder, in an office after hours, which was the first mistake. But basically there was an argument over the unauthorized revisions of my lyrics – you know the story – one line of Seth’s vocals got erased or replaced. So it’s a rare outtake kind’ve thing. And the individuals who’ve heard it have all spoken favorably of the recording, and with that interest mounting I figured the fans needed to have a vote as to whether or not it got heard. It’s part of history now.

RW – And I certainly didn’t want the only time this shit got heard to have been on a past comp with such a fucking stupid title. Of course not.

GS – Yet you went on to collaborate with Seth after this …2 albums on drums with Full Blown Aids… and your grindcore/free jazz quartet.

RW – And I’m glad to have the opportunity to tell you that I regret a lot of that anti-pc shit and what I did and was present for during that particular detour. I was doing way too much cocaine then. I’m happy to be uh, ‘back home’, so to speak, with those of a compassionate political world view again now. Because one or two of his entourage were the most despicable human beings I’ve ever met in my musical life.

GS – And is there anything you want to say regarding his passing, at all?

RW – No, there definitely is not. RW – There was a period of time when I felt my circumstances were being…orchestrated to ah…lead me out of this entrenched bitterness…as a lifelong entrenched atheist it was…pretty terrifying.

GS – but you haven’t answered the question…

RW – I have some real significant differences of opinion the leadership of the American Christian Church. They haven’t distanced themselves from ‘Westboro’ enough. And the notion that the Old Testament should be used as a rationale for Middle Eastern ‘policy’ like these doomsayers do is just fucking nauseating. That’s one of the ways they ‘rattle the saber’. But, there’s a lot of very cool African American Christians, I saw, who were very good to me, and don’t seem to be playing along with Evangelical Christianity’s pig republicanism.

GS – Is it true you wrote a song with the lyrics ‘burn down the Pentagon’ before 9/11?

GS – but, you wrote the lyrics…

RW – that was meant in an Allen Ginsburg kinda way, a ‘chant and levitate the building’, ‘Yippie’ kinda way…

GS – with a lyric where you go on to call for politicians to be dragged ‘to the guillotine’?

RW – Yes, in an allegorical, fun kinda way, sure. The definitive version with the triple tracked guitars is on Nightstick’s ‘Ultimatum’, on Relapse.

GS – so…you’ve continued on with new projects, I see…

RW – Yes, I came together with some kindred spirits ideologically to record an anti-war opera I’ve written, the harshest statement we could make…Ami Lawless from VOETSEK, Jeff Hayward from Grief and Larry Lifeless sings a cameo as the corpse of Uncle Sam. I also drummed on some dark ambient shit – ‘Sky Burial’s recent release. But I’m headed to providence this weekend to hopefully jam with the boys from Dropdead on some SIEGE tunes, and bring them to listeners live. Their rehearsal space is one of the loudest fucking rooms I’ve ever been in in my life. That seems a good way to celebrate SIEGE’s legacy after 30 years – by destroying what’s left of my hearing with some sick live punk rock.