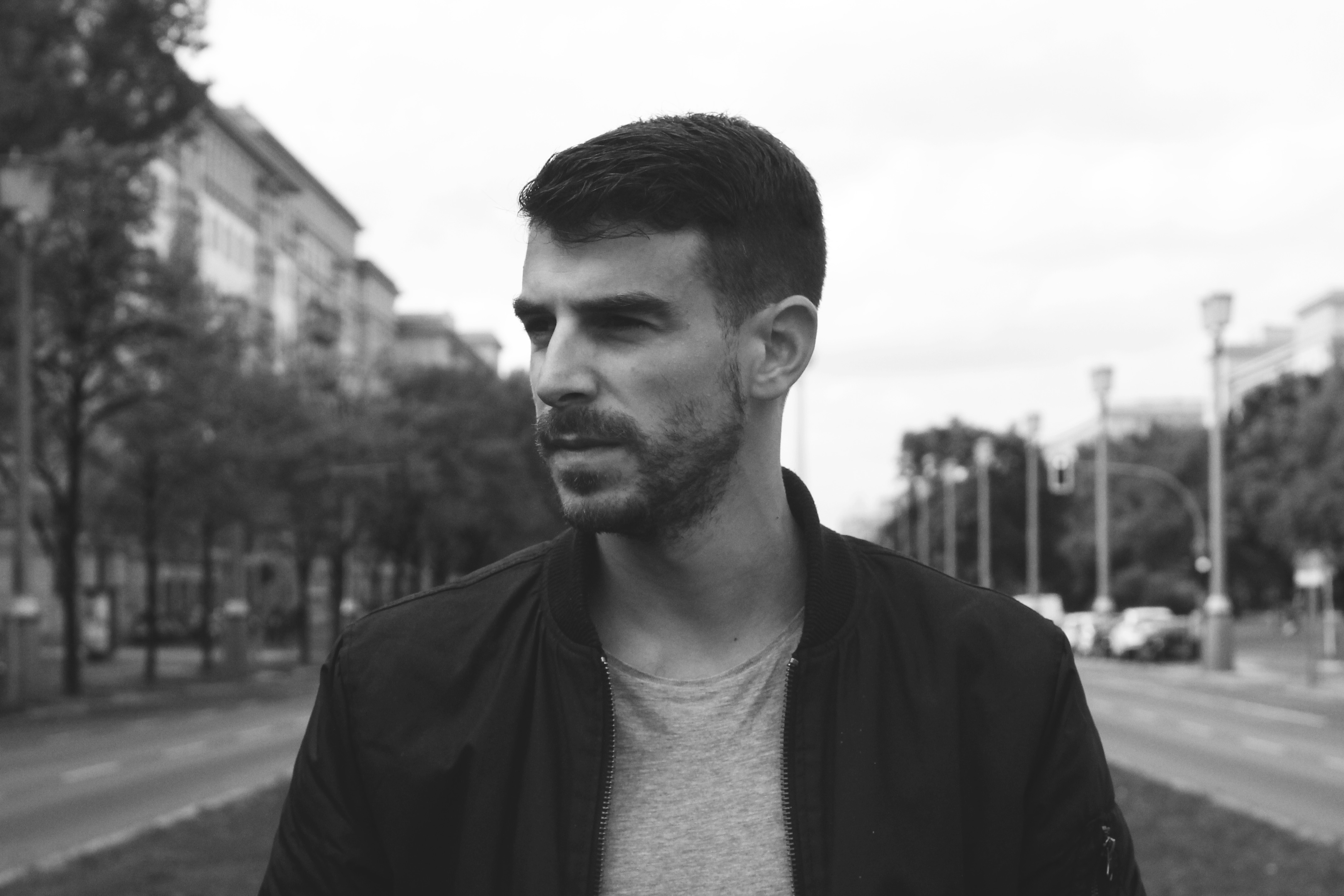 P.E.A.R.L. is an extraordinary Santander-born electronic music producer, currently based in Berlin. Having previously served as one half of techno duo Agony Forces, he now begins a journey on his own. His recently released debut album, Temptation Through Impatience, reveals the depth of his sonic identity, and his excellent take on intoxicating techno concepts. All these aspects are discussed in the interview, as well as his beginnings in the electronic scene, the local scenes he has been a part of, working on his own, production techniques and occult manuscripts on the process of dying. Hello! Firstly, thanks for finding the time to do this interview, it is much appreciated. Do you want to give a brief overview of your musical journey? As far as I know you were born in Santander, but you are currently based in Berlin. What signaled that move?

Hi! My first contact with electronic music was with the late 90’s UK sound, which would later become one of my fundamental influences and sources of inspiration. I was born and raised in Santander (North of Spain) although I also lived in Barcelona during my adolescence. Like 7 years ago I came to visit Berlin and I felt in love with the city. Two years later I decided to move here. Of course the main reasons have been music and club culture but also because I really liked the way of life in the city.

For a long period of time you were one half of techno duo Agony Forces. The project was very successful and you toured around for quite some time. What was the reason for ending the project? Did you feel that a cycle had come to its end?

The AF project started in 2006 and after 7 years we decided to end it up and focus in our solo projects. Of course when you finish something that you have been so into, you feel like a cycle come to its end but I think all things have to be finished at some point.

Having been active in the Spanish scene, and now a resident of Berlin, how would you compare the two? What are the unique elements of each scene?

Spain has always had a powerful scene. Many interesting artists and labels have come out ahead with a unique sound. Unfortunately it’s not the same if we talk about club scene nowadays. In late 90’s perhaps it was a strong one but now only a few clubs around the country are supporting the scene in a constructive way.

At the end I think both scenes can’t be compared. Berlin has the strongest scene in the world in my opinion, having both their good and not so good elements too. How would you compare P.E.A.R.L to Agony Forces? Do you feel more free to experiment with your own project than in a collaborative group?

The early Agony Forces stuff was more primitive and rough. Then we were experimenting with something more musical adding pads and lower bpms. My personal project have been always, since I started more than 10 years ago, characterized by heavy percussion and euphoric breakdowns. Of course I feel more free to experiment but also you have to get the 100% of yourself when you work alone.

How different do you find working on your own to working with a partner, as you did in Agony Forces? What would you say are the advantages and disadvantages of each mode of producing?

When you work in a collaborative project you have to be always stick to your partner. That’s good but sometimes you also lose a bit of your “soul” and your personal point of view. In my case, the best thing of working alone is that you have to be always improving and trying to get the best from yourself but at the same time that’s also a disadvantage.

Can you tell us a bit about your approach to producing? Since you include a lot of interesting additions to your tracks, in drones, strange ambiances and bizarre rhythms, I would like to know if you follow the same approach with all your work. Or do you switch up, starting some times from the rhythm and other from the atmosphere?

It depends of the track of course. I mean, each track is different even if I start a new one from an existing one. But for me, the bass sequence is the most important thing when producing a new track. If I can spend, let’s say, 15 minutes listening to that sequence loop with just a kick drum and I don’t get bored, it means that it works. Mostly all the times when I get that sequence, it brings me to different situations during the producing process. In that point I add some other things like atmospheres, different shapes and forms.

In your biography you mention that your production is inspired by British heritage. What was it that introduced to that sound and what is so special about that scene to you?

When I get into Techno, many years ago, I get heavily impressed of that powerful and harsh sound from UK, mostly Birmingham Techno but also Sheffield’s IDM sound. At the same time I come from the northern coast Spanish scene where, I think, many artists we have been always very influenced by that kind of sound.

What type of setup do you use? Are you working digital, analog or with a hybrid approach? Is there a particular piece of equipment that you just cannot do without?

I work with a very simple digital based setup. During the years I have added some hardware to the setup but always digital based. In the latest years I’m putting away of the computer the signal processing using external distortions and effects. Nowadays I couldn’t work without for example, the Sherman Filter Bank or the Analog Heat. But I have to say that i’m getting very curious about the modular world. I find it very interesting. Let’s see what happens in the future. You have a new record, Temptation Through Impatience, coming out in April. What can you tell us about the sound of your new work? How would you comment on the evolution of your sound through the years?

This record is my album debut and it means a lot to me. I feel this moment of my career, as the ideal moment to settle this sound that I have been molding during the last years. It took me almost a year and a half to finish it and for that reason I did not want to do it until I felt 100% prepared. I think it is a review of the sound I have been doing over the last few years but at the same time trying to add some new nuances to open the door to new forms and sounds in the near future.

The promotional write-up that comes with the promo for the new record makes a reference to Ars Moriendi, a 15th century book giving clues on how to “die well.” How influential was this work in the music for Temptation Through Impatience?

I discovered Ars Moriendi by another book of ancient illustrations from that period of history. The title comes from an illustration belonging to the second chapter of the book which talks about how to avoid the five temptations. These five temptations have served me as a huge inspiration somehow when producing some of the tracks. For example, ‘Impatience’ which starts with a short tense atmospheric drone and suddenly changing to an obsessive thing.

I also find a great deal of spirituality in your work, both in the music itself, for example “The Search of Identity,” but also in some of the track titles (“Lack of Faith,” “Spiritual Pride” and “The Search of Identity”). This has been the case with some of your previous releases as well, Four Cardinal for instance. What is the allure towards that subject?

I have always been struck by the way in which, in the past, some powers, in this case the Catholic Church to name one, have tried to influence people in all aspects of their lives, creating contradictions in his way of acting in parallel in other aspects. Those contradictions or situations are the ones that are the guiding thread in my label work and that I try to capture in every reference. You have also started your own label in Falling Ethics. Can you tell us about the ethos of the label? What type of artists are you looking to promote through it?

Falling Ethics was initially a platform to launch my own music. A kind of rediscovering of my own sound after a long period working in group. To this day has changed a little my policy of publishing and not only use it as a platform for my own music but also to release music by artists who have a type of sound which I identify with.

Are there any more releases that we should be expecting from you in the near future?

Next release on Falling Ethics which is coming before the summer (I guess). It’s a six track record from Tensal & me. Some different stuff to be expected!

Do you have any upcoming gigs you would like to mention?

I’m really looking forward to play in Tresor next month. It’s gonna be a huge PoleGroup showcase in both rooms, up and downstairs.

Advertisement. Scroll to continue reading.
In this article:falling ethics, P.E.A.R.L