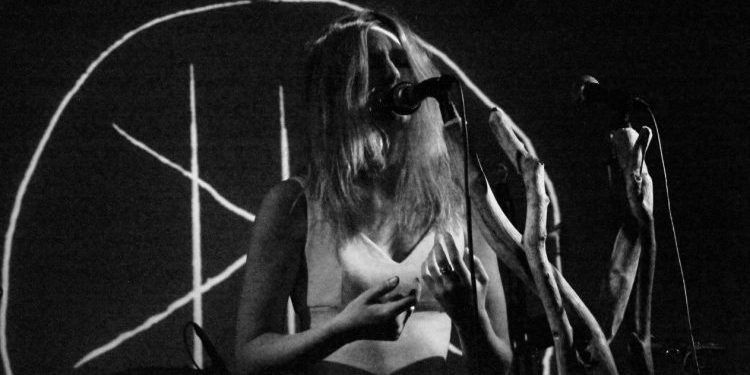 Myrkur is the black metal musical project of Danish musician Amalie Bruun. Her most recent album, Mareridt, was released on September 15, 2017 through Relapse Records. She is on tour all around Europe. I had a chat with Amalie in Bologna (Italy) about darkness, nightmares and being a woman in the metal scene.

Let’s start from the beginning. Why did you choose the name Myrkur?

Because it means “darkness” in Icelandic and it was, for me, my personal venture into my shadow side. So I wanted that to capture what I was trying to do psychologically.

What inspired you at the beginning of your career?

I suppose mainly classical music, nature and the 90s Scandinavian black metal bands that I liked.

Do you have a childhood memory that you think describes your choice of being a musician?

Well, the truth is that my father is a musician, and so I was grew up always playing music. There was really no question that that was what I would be doing. I got my first violin when I was five and learned to play the piano and sing. I’m not like one of those people that had a choice. That was just it. But that was good, because it’s the only thing I’m good at.

As you said Myrkur means darkness. What are you afraid of?

I think I’m mainly afraid of things that aren’t actually dangerous. For example, in my family there’s depression and mental illness, so you become scared that you might inherit these things. I’m more afraid of inner demons taking my life, not really of anything else.

Do you think your roots determined who you are now as an artist?

Most certainly. This musical project for me is very much a manifestation of Nordic heritage and folk music in particular, which is pre-Christian. For me, of course, growing up in Scandinavia shaped my skeleton of musical history. And then I also got to travel a lot through the world. I got to live in other countries, and living abroad can actually shape a very strong identity of who you are and where you come from. You see that a lot, for example, in different immigrants. They feel very strongly about where they came from, which is a very natural thing when you’re all of the sudden faced with a completely new culture. Is there something that you missed from Denmark?

I think, to be honest, nature was the biggest thing I missed, and different foods, as well. I think that’s pretty normal for people to start missing their local food.

Mareridt in Danish means nightmare. Why did you choose this concept and title for your album?

Well, it was quite a natural progression if you view Myrkur as a bigger psychological journey for me of going into the shadow side. I’ve been tormented by nightmares and bad sleep since I was a child. So for me it was a natural next step in order to go into the shadow side. It was going into the subconscious of myself, into that part I don’t understand yet, to listen to what the nightmare is telling me instead of running away. Where is it coming from? Is it a deeper archetypal, almost historical meaning or is it something right here in my life that needs solving?

Do you write your nightmares and your dreams down?

Yeah, I started to write them down, and I started to compose music to them. So that’s how that album became something.

So do you consider yourself a tormented soul?

I think you would have to ask the people around me. They would probably say yes. But I can also see a lot of beauty and great things in life every day. I’m not one of those miserable bastards.

In the video of Ulvinde you are with a convent of girls in the middle of the woods. Does nature play an important role in your life?

It’s everything to me. It’s all I care about, to be honest. And dogs.

When I listened to the song “Funeral”, I immediately thought about someone in my life. Who is this song dedicated to?

I can’t really say who it is dedicated to, that’s too personal. It’s a person that I’m forced to coexist with in my life, but the person has always made me feel very broken. So it’s almost like I imagined him dead so that I could find peace — but peace also with him. It’s almost like a white flag. That’s why I say I wear a white skirt, and I’m not mourning per se.

I would like to thank you for that song. I feel peace too.

You collaborated with Chelsea Wolfe on that song. Do you think that there is a strong connection between women in music?

I don’t think from a commercial or industrial perspective there is. No. But I think spiritually, and from a bigger perspective, there is an unbreakable bond between women like that. And it needs to be nourished and worshiped. That’s one of the main reasons I wanted her and I to write music together, not for industry purposes but for connection and to set a real-life example of two people that are already deemed competitors but instead of competing, put out albums together at the same time. We actually work together. It’s the opposite. It’s the middle finger. And she was all about that too. So I really have a lot of respect for her.

I read that you have received some death threats. Why do you think that people are so closed minded in 2017?

I think that when I started this project in 2014, the genre was still very stagnant and had not yet been challenged or given too much freedom to develop. Or, at least, it wasn’t acceptable. And then, there weren’t any female solo projects. I was kind of the first, and got the worst of the Internet. So it was like a combination of things. I think now, it wouldn’t be like that again. To be honest, I think it was very bad at that time and I think since Donald Trump won, everything has changed on the Internet. It’s not that big of a deal that a woman wants to have a seat at the table. Get over it. It’s not that bad. And I’m not their enemy either.

Do you think that being a woman in the metal scene is hard?

I would have initially said no, because I don’t ever want to see myself as a victim or anything. But I think it’s just actually a little difficult to be a woman in music. For example, I’m on this fucking tour and it’s like 18 men and me. And, thank God, a female tour manager. But she has to wear these big gloves all day long for anyone to take her seriously. So I miss female energy.

I think I’m being accepted. Actually, I’m walking in and opening the door for myself—I’m not waiting for anyone to invite me in. I’m just kicking in the door. And I think that’s great. And I have a great record label and everyone is super supportive and there are lots of great men in my life. But sometimes the lack of female energy is hard. It’s more about that. I miss it and men are fucking annoying sometimes in that big of a number. I asked Addi from Sólstafir, “How would you like this tour with 18 women and you?” And he just said, “Noooo!” So that’s the point. But it is what it is and that’s fine. We all get along. Some people think that you are not an artist, but a project of the music industry. In your opinion, why is that?

Oh, you would have to ask them. I can’t tell you.

How can you describe your musical approach?

I don’t know. I guess I feel, for lack of better words, a free spirit. When I approach music, I flow quite freely through different genres. I play a lot of different instruments, which again gives me freedom. And I like to see Myrkur as a kind of three-dimensional thing, because I like to have concerts where the acoustics or the actual location plays into the show and the music. And taking the nightmares and putting them into it… My approach is anything but fixated. It flows like water.

Is there any musical artist from the past or present that you feel linked with and why?

That’s such a big question. I guess I really, really adore the composer Edvard Grieg, the Nordic composer. He was different in a time of very artsy European composers. Grieg was putting out all these folk melodies and all these childish songs. They had some Nordic darkness to them but also a kind of childishness. And all the critics were saying, “What is this ridiculous troll worship?” And now we all adore him. I love him.

What do you see in the future for Myrkur?

Well, I’m going to go on a kind of acoustic, dark folk music tour where I experiment with that more, in 2018. And I want to do a record like that: dark acoustic folk. Thanks to: Hard Staff Booking