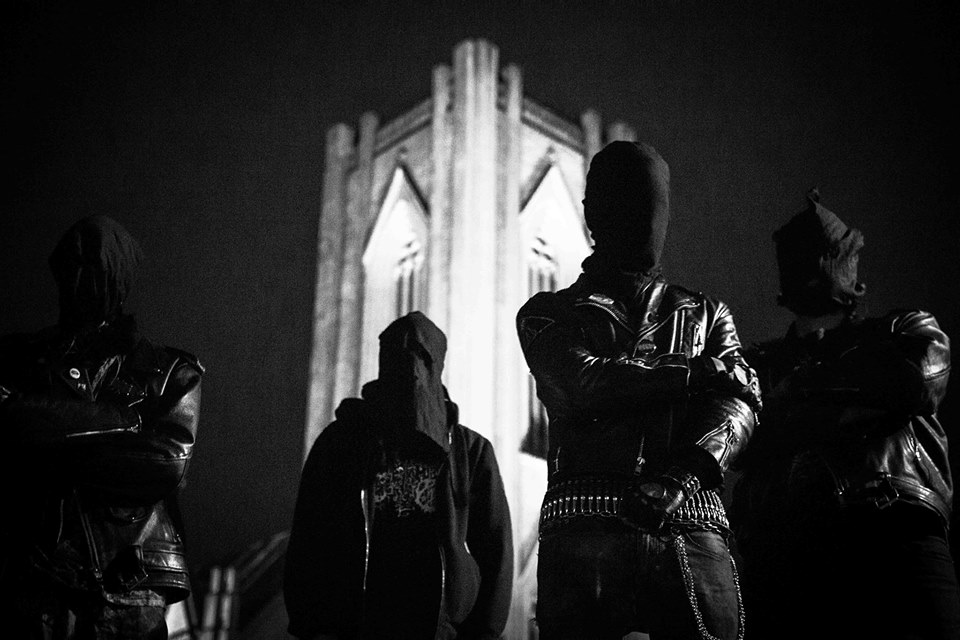 Misþyrming ought to be a black metal institution. They’re off to a fast start in their young career, crafting one of 2015’s better releases thus far, their first full-length release, Söngvar elds og óreiðu. Misþyrming hail from Reykjavik, Iceland, which is home to a burgeoning black metal scene. Far more than scene hype, this band has already carved a niche in underground black metal circles. I praised Söngvar elds og óreiðu in a review for CVLT Nation recently. I now sit down with Misþyrming’s Dagur so CVLT Nation fans can get to know the band better.

First off, Dagur, I would like to thank you for doing this interview. I am proud to call myself a fan of the band. Tell us how Söngvar elds og óreiðu has been received so far.
The reception for this album has been enormous. It’s nice to see that our intention to make a decent black metal album came through. It’s not that surprising, considering the hard work behind the making of the album. I have only seen extremely positive reviews. The vinyl version of the album sold out in a couple of days, which I think is total madness, and we’ve been confirmed to play some of the most respected metal festivals of the year. With all that in mind, I’m honored by the recievings. Do you like it in Iceland? It’s a country of polar opposites, from active volcanoes to calm, tranquil lakes. What is it about Iceland that spawns such prolific and authentic black metal music?
We’ve got a shitty economy and shitty politicians and I believe that democracy doesn’t exist. But I don’t know if that makes Iceland any different from other countries. Many people hate it here, including me. And it’s cold 10 months per year. Do you feel strongly tied to other bands in Iceland, or do you feel that Misþyrming is, aesthetically speaking, much different?
Up to this point, I’ve always been inspired by Icelandic black metal bands mostly because of the proximity. Being a part of the Icelandic black metal gang that is Vánagandr ties us together with the other bands. Of course, there are aesthetic similarities and differences between Misþyrming and other bands here in Iceland, but those are for anyone to evaluate. I really like how a reviewer from blackmetalreviews.com put it: ‘Misþyrming is from Iceland so comparisons with Svartidauði and Sinmara are as inevitable as they are exhausting. Somewhere along the way, people seem to forget that it doesn’t matter how ‘Söngvar Elds Og Óreiðu’ measures up against either ‘Flesh Cathedral’ or ‘Aphotic Womb’ or ‘Biophilia’ because this is a fucking different band.’

What are the band’s influences? Is there authentic folk music in Iceland and if so, did your country’s native sounds help shape your own original style? Were you influenced at all by progenitors of second wave black metal, such as Bathory and Darkthrone?
I’d guess that the fourth wave of black metal is here. That is, bands inspired more or less by the bands that were inspired by the second wave. Misþyrming is no exception there. I, like most other black metal enthusiasts, love those bands you mention but they’ve not been a great inspiration for me as a musician. Don’t forget that black metal music is often a result of inspiration from various black metal and non-black metal sources.
Yes, Iceland has some authentic folk music, but I personally don’t really connect with that.

Misþyrming is gimmick-free, just the way we at CVLT Nation like it. How did you approach writing songs and recording them for Söngvar elds og óreiðu? Did you play your instruments around a campfire in the Icelandic wilderness? Where did the recording take place?
When I hear good music, I want to make good music too. I’m studying recording engineering in Kópavogur, which is a part of Reykjavíks capital area. That is the place where I mixed Mannveira, 0 and Naðra, and I recorded ‘Söngvar…’ there. Like I said, it’s fucking cold here in Iceland so that campfire thing would be a terrible idea. Do you plan to play live shows? If so, when can we expect future rituals? Will there be bloodletting? Or will Misþyrming simply play music without pretension?
We’ve played a few shows here in Reykjavík.
I want live shows to be remembered, and it would obviously not suit the band to be laid-back while performing. We put everything we’ve got into playing live shows, and we want to make it worth every second.

Following the last question, if you were to play live, which bands would you want to play with? Are their reputations important? What cosmos-tearing, infinitely-destroying, all-encompassing darkness shall be home to such a destructive ritual?
We did the Úlfsmessa show last year with our companions NYIÞ, Carpe Noctem and Naðra, which was total madness. Flying glass and daunting atmosphere. We’ll definitely do something like that in the future.
I’m excited to play all the festivals we’ve confirmed to play so far. The final edition of Nidrosian Black Mass next December has one of the best line-ups I’ve seen in my life.

What can we expect from a future release? What are your plans so far? Will it be vastly different from Söngvar elds og óreiðu?
What I’ve written so far since ‘Söngvar…’ shows musical evolving, but it’s still the same band. We’ve agreed to do splits with bands we admire and when the time comes, we’ll hopefully make another album. You’ll have to wait for new material for now, since we haven’t even begun playing ‘Söngvar…’ live in its entirety yet. When all is said and done, and planet earth has become a desolate, dried-up husk of an asteroid, would you still be playing poser-slaying, highly artistic, intelligent black metal for the few?
I will keep making music with Misþyrming until we’re done. I’d rather kill the project than make music for the mass productions’ sake.

Thank you for doing this interview. Söngvar elds og óreiðu will always be one of my favorite black metal albums.
Thanks for the kind words.