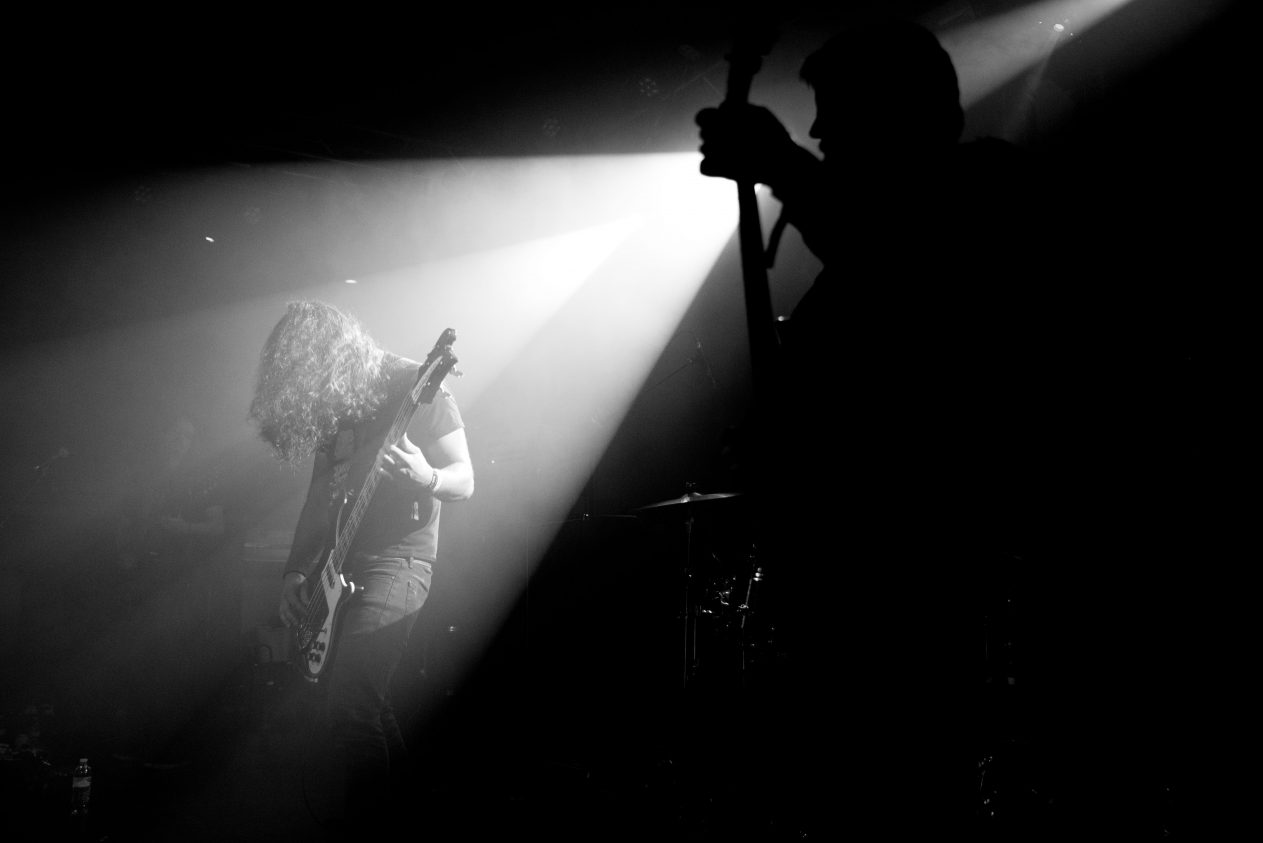 Teddie Taylor
Lycus has nearly perfected the sonic incarnation of blackness. Their Californian funeral doom metal is a menacing, melodic and mesmerizing behemoth of sound that is refreshing in a genre marked by its longform sedated stylings. As if with multiple voices, Lycus moves between violin interludes, dense, damning riffs and Gregorian monk-esque to death metal vocals as they tell dark tales of triumph and destruction. We chatted with the band after their entrancing set at Northwest Terror Fest about diversity in doom, self-criticism and cats. What initially drew you to the doom metal genre?

Jackson Heath: We just like dark music in general. I think doom spoke to us. We like all forms of dark, depressing music. Doom fit the bill on that one. We’re open to going in other directions, as well. Not just doom.

Trevor DeSchryver: Yeah, I’d say the atmosphere, the emotion, the slow tempos and the overall sense of despair is kind of what intrigued us early on.

[Vocalist warming up/growling down the hall]

I swear I’m adding that in the interview. “Parentheses. Someone gurgling in the other room.” [Laughs]

Bret Tardiff: [Mimicking metal vocals] [Laughs] Starting to get fuckin’ lit over there. It’s not even 10:00 yet!

It’s not even 8:00 yet! What do you guys think you do differently than others in your niche genre?

Jackson: Well, we try to bring in lots of different influences. We try to make all of our song structures as varied as possible and try to have a diverse scope of sound instead of just rehashing the same thing. If something doesn’t sound unique to us, we usually throw it out.

Trevor: We like to incorporate, you could say, mood swings in the songs where it kind of builds up to a climax and then breaks down as opposed to just continuing at the same tempo throughout the entire song. What do you feel when you play and what do you hope everyone else feels?

Jackson: It makes me feel less shitty about everything. It kind of relieves all the tension that’s built up in everyday life. It’s like a source of catharsis. Release. To make music that exhibits our feelings and hopefully other people feel the same kind of relief.

Trevor: I’d say mainly catharsis, like he said. That sums it up. Hopefully people can relate in some way based on their own life or experiences and bond with the music.

Writing fairly long songs, how do you get to the point of being finished?

Jackson: It takes a really long time for us. On our last album, a lot of those songs were almost two years in the making. A lot of times we’ll start working on a song and then just say, “It’s not good enough,” and completely throw it out or just use pieces. It’s a really long, gradual process because I think we’re our own worst enemies in terms of being really critical of everything we make. It takes a long time for us to gain our own approval and for it to be considered a finished song. A lot of work and a lot of recording things, listening back to them, saying, “I don’t like this. I might change that.”

Trevor: I’d say each song is almost like a story, in a way. It has to have an introduction, build-up, closure and then becomes complete. And, you know, obviously in different ways, but that’s the general idea. [To Jackson] That’s how I see your structures.

Well, you do a good job of that. Have you started working on anything new?

Jackson: Yes, we have. We plan on spending the rest of 2017 not playing any shows to kind of finish working on what we’ve been starting on. We hope to have the new record done as soon as possible.

The new stuff – how does it or how do you want it to differ from the two previous records?

Jackson: Basically, we’re just going to see what it sounds like and let it be a free thing with no restrictions of, “Oh it has to sound doom or it has to sound death metal.” We’re just going to create and see what happens. In general, we do want to incorporate more diverse styles on the next record because that seems to be the direction we were going in on the last one. Who knows what the next one’s going to sound like… Do you have any side projects, and how are they different from Lycus?

Trevor: I have a newer project that I just joined a few months ago. It’s called Silence In The Snow. The music is more along the lines of dreamy post-punk, but it’s still quite dark. I’d say it’s on the opposite end of the ‘dark spectrum,’ but it’s not metal at all. [Laughs]

Jackson: No. I don’t have any other projects. This is my thing.

Trevor: He has one with his cat.

Jackson: [Laughs] Yeah, my cat and me are in a two-man black metal outfit. He does vocals.

Jackson: He’s got some good vocals. What new music have you been listening to lately?

Jackson: Yeah, I was going to say that too. I’m a big fan of the new Soft Kill album. That one’s been in heavy rotation lately. I’ve been in a Townes Van Zandt mood lately. Spinning him a lot.

Jackson: They’re good friends of ours, but we love all of their shit. That’s in terms of new releases. All those are pretty solid. It’s not new anymore, but the newest Shape of Despair that came out in 2015. That one’s been in rotation lately for me.

Trevor: There’s also a band from Oakland called All Your Sisters that I really love.

Trevor: Thanks for having us!

Jackson: Thanks for your support throughout all the years.