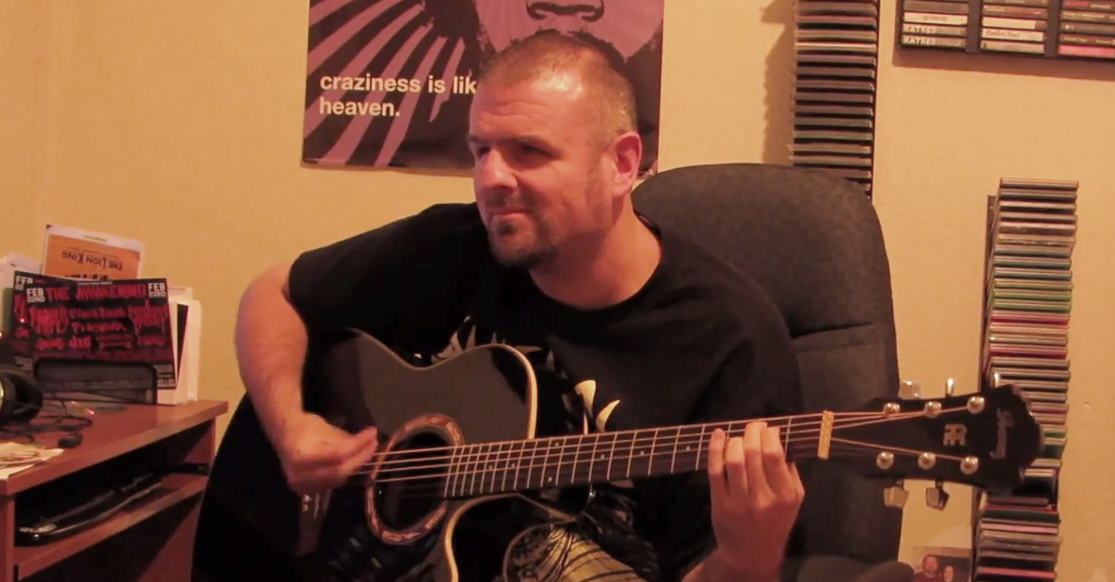 Greg Steel epitomizes what it means to be brutal. He screams, plays guitar, and programs beats for his death metal project, Piece of Bloody Steel, and he plays drums for the grindcore/power violence monolith that is Maggot Colony. Somehow he also finds the time and energy to play in two other bands, easily making him one of the most prolific musicians I’ve ever met. Oh, and did I mention that he’s blind?

I recently saw Greg play at a motorcycle club in Porterville, California. Greg’s amazingly supportive wife led him to the stage, where he set up his laptop and guitar amp. Screaming and growling into a headset mic, Greg brutalized the crowd with his relentless death attack for the next hour, only taking a few short breaks between songs. His vocals and guitar playing were as solid as his programmed beats, and I’m not exaggerating when I say that he reaches the same plane of masterful brutality as Dying Fetus’s John Gallagher and Nile’s Karl Sanders.

Unlike his music, Greg is an extremely friendly guy, and he was eager to answer my questions.

Greg:      My bass player in Maggot Colony pretty much got me down that hole. He showed me Slayer and Death and stuff like that, and I just got into heavier and heavier stuff from there.

Greg:      I started playing guitar in the seventh grade, which was in about ’92. Then I started Piece of Bloody Steel in ’98. I’d hear bands like Limp Bizkit and I thought, I want to take this a whole step further. It was something I felt like I needed to do.

Greg:      It’s funny, what made me want to start getting really brutal was underground techno – the faster, more violent stuff. My neighbor got me into that in about ’97, when he showed me The Gabber Story Vol. 6 compilation. Once I heard that, I was just like, I have to do something like this. I wanted to mix real guitars and vocals with electronic drum beats and just try something totally different.

Greg:      First, I start with a guitar riff, and then I’ll piece the whole song together. I just use Cakewalk for the drums. I imagine what I want to play on real drums and then program it since I can’t play double-bass that fast anymore. I used to be able to, but I just don’t have the stamina anymore.

Lately, I’ve also been re-working some of the songs I wrote in the late 90s. They were originally more thrashy, like Pantera, with lyrics about gore, destruction, torture, and war. I’ve just been taking those old riffs and speeding them up. Now they’re actually closer to what I originally heard in my head. I also have a bunch of new songs, so I try to mix it up.

Greg:      There’s the obvious, like getting to practice and gigs and stuff. Another big challenge is that a lot of music software isn’t accessible for us. Pro Tools is finally becoming accessible for blind people, but when everyone started using it ten years ago, it wasn’t. I basically had to create all my own keyboard shortcuts, which was a challenge.

Greg:      Yeah, I was born premature, and I only weighed two pounds. They had to keep me in an oxygen chamber for the first two months.

Greg:      I play bass in San Joaquin Steamers and drums in Night of the Hooker.

Greg:      Thanks! I also do lots of keyboard stuff, too – like drum and bass and hard house.

JJ:             There’s a lot of metal heads out there who don’t understand how important hardcore and punk are for metal. How would you describe the influence hardcore has had on metal?

Greg:      Well, hardcore punk has basically become an elemental part of metal. It made the music more aggressive. Black Sabbath are the kings of metal, but Napalm Death wouldn’t have existed without hardcore. I definitely wouldn’t be playing in Maggot Colony or Piece of Bloody Steel if it wasn’t for punk and hardcore. Maggot Colony is an extreme punk band, although a lot of people would just call it metal.

JJ:             You talked a bit about lyrical content for Piece of Bloody Steel, but are there any overall themes, or does it change from song to song?

Greg:      It pretty much changes from song to song. Right now, I’m writing a song about pigeons in the warehouse where I work – how they fly into the fans and kill themselves. My co-workers and I call it the bird alarm.

JJ:             How do you find the time to balance Piece Of Bloody Steel, Maggot Colony, and your other bands? The songs in …Steel and Maggot Colony would be super hard to play, so I’m sure you have to practice a lot.

Greg:      Whenever I get time, I just try to work on stuff at home. We also get a lot of stuff done at practice for Maggot Colony and my other bands.

Greg:      I met Ryan when I was in the tenth grade, and I introduced him to the bassist in this band called Iniquity. Iniquity had a falling out in ’98, so we started Admonitory, which became Maggot Colony in 2001, when we switched from death metal to grindcore/punk.

JJ:             You’ve been playing brutal music in the Central Valley for a super long time. How would you describe the metal scene in the area?

Greg:      Honestly, it’s pretty dead. There’s really not much of a metal scene around here anymore. Back in the late 90s, we had more bands and places to play. It was actually pretty happening. More big bands used to come through, too—bands like Slayer, White Zombie, Prong, and Anthrax. But, nowadays, you have to go to LA or Frisco to see those bands.

Greg:      I pretty much taught myself guitar and drums. I did take some piano lessons when I went to college, and some when I was real little. But I taught myself drums and everything else.

JJ:             Playing in aggressive bands, I often have to explain why the music is so intense to people who aren’t familiar with that style. What do you say when people ask you questions like that?

Greg:      People mostly ask me about the vocals. I basically ask them, what other kind of vocals do you picture to this music? There’s really no other type of vocals that would fit. The music is aggressive, so the vocals have to be aggressive, too.

JJ:             You have some really mean screams. Did you have to train yourself to scream in a way that doesn’t make you hoarse after every show?

Greg:      Yeah, I used to push my voice a lot, and it wouldn’t sound good. Now I just try to relax. I was in choir for a few years in junior high, and I still try to use some of those techniques. But it took eight or nine years for my voice to start getting to a place where I wanted it.