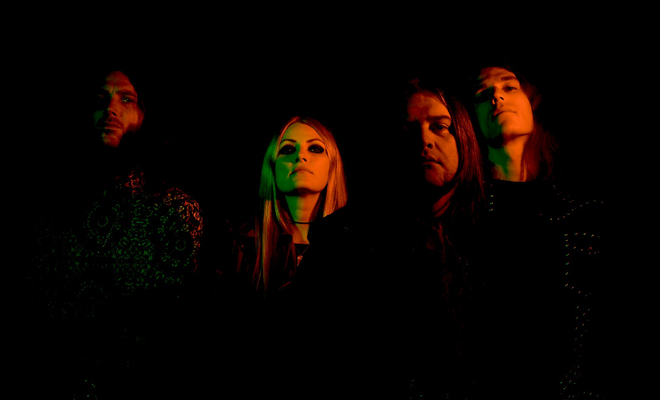 Well, we have just completed our new LP. We worked on it solidly all last year and recorded it in October. I laid the vocals down in late November, then we finished up in Jan/Feb. It hasn’t got a title yet, but some song titles are ‘Time To Die,’ ‘Funeral Of Your Mind,’ ‘I am Nothing,’ ‘Sadiowitch’. It’s seriously fuckin’ heavy and dirty, but a departure from recent material production-wise…it’s more savage and distorted, but defined like the early Wizard.

We are gonna release it on our own imprint called Witchfinder Records, but it’ll be distributed worldwide, and properly this time. It’s gonna be pretty fuckin’ good actually, and reasonably priced, good quality and NOT limited. We wanna sell records, not create stupid eBay collectables. What comes first for Electric Wizard: the riff or the bong hit?

What city/country, in your experience, boasts the best herb?

UK, Holland…But I’ve had exemplary shit in most places… haha, except maybe Japan – but it’s pretty fuckin’ hard to score out there – and Norway, but I got some great hash there last time. Berlin sucks too…you have to score in the park, it’s like New York or something. Not really that cool.

When I listen to your music, it expands my imagination – visions of altars, druid caves, bursts of light & huge herb plants fill my mind…what do think it is about your songs that provoke the imagination?

I dunno ..I guess that’s where our minds are at, so it comes through in our riffs. We are on the same level and we share the same mental vision or universe. People come up to me with quite detailed and accurate visions that have been inspired by our music…exactly as we had envisioned them, but told no-one…but it translates anyway, like telepathy. It can be a bit fuckin’ creepy sometimes…but the power of the mind exists.

What places, known or unknown, do you want to take the listener when they blast ‘Black Mass’?

That song was kinda a solitary prayer to Satan by a teenage me, haha …inspired by the love of Reign In Blood. Y’know the cover of Reign In Blood? That’s where it takes you to fuckin’ hell, but on fuckin acid…haha.

Does literature or film have any effect on your sonic art and visual art via your album artwork? What visual artist has had the biggest impact on the band?

A lot of writers influenced my teenage years and it is still the basis of my aesthetic…HP Lovecraft, R.E. Howard, Arthur Machen, Peter Cave, Aleister Crowley…also sleazy shit from NEL or even Satan Press (though they can be pretty rough sometimes..haha).

The visual artist with the biggest impact on me would probably be Jess Franco or any number of 60s/70s movie posters…we really dig the crazed hyperbole and gross colours…yeah. Franco was a fuckin’ genius and a real talent – he was obsessed with underground art and horror, Lovecraft, music, pulp fiction, horror and sci-fi comix…hail the king.

How important is the blues to you as an art form? What bluesman would you say is your biggest musical influence?

I don’t care for a lot of it, but I respect it ‘cos obviously it’s my roots. It was the perfect union of sophisticated European music and the pagan roots of African music, bringing music full circle again back to its origins. Also, of course, it introduced the ‘heavy beat’ which evolved into rock music.

I dig Detroit blues…or riffy stuff too, like Bo Diddley. When you are performing live with Electric Wizard, what is your physical & mental state of mind?

What impact did recording at Toe Rag Studio have on your sound with Black Mass…if any?

Haha…it probably had too much impact on it.

How has the writing process changed since Mark rejoined the band?

Now its jam, jam, jam…really feeling out the songs and then torturing the shit out of them. It’s always been the same kinda riffs though..we never really evolved beyond thuggish, neanderthal-type riffs. I still wield the guitar as a weapon…volume is violence.

Can you talk about the connection you have with Liz when it comes to writing songs, and how you inspire each other to create?

Well, we create everything together…we have a wizards brew.

We have always connected though digging the same shit – outsider art and the Riff. Sabbath, Hell’s Angels, 70s horror, Vitus, black magic (white magic), doom, Hellhammer, Bobby Liebling, comics, Jean Rollin, Blue Cheer, Stooges, Jose Larraz, 13 etc. We grew up on the same stuff (sick movies, fanzines, van tours, Bloodfarmers/Vitus, weird red-light shit, punk/metal to black/death to doom). We also both ‘obsess’..haha..anyone who does it will understand…but we can channel it into our art, y’know.

We also both have an English father and an American mother…haha, but very different…but it’s in the genes too…I guess.

What are some of the things that you draw from for lyrical inspiration? Do the lyrics come to you before or after the music is written?

I try to write from the subconscious. I think all the influences rise to the surface and coalesce. But the influence could come from anywhere or anything or anyone. The lyrics come after…I will come up with a title or a lyric or two, just bellowing into the mic as we rehearse, and that usually gets developed into the main lyric as the song is completed musically. Jus, could you explain to us the power of the low end and how repetition can put a listener into a trance-like state?

I think that’s pretty well known, it’s the pagan roots of music. That trance low-end thing…the droning is the sound of the Earth. The world vibrates at a certain frequency…Om…Om…that is drone.

We try to actually fuck with that Earth rhythm to cause disorientation and distortions in your perception, to disturb your equilibrium and break your self-obsessed paradise to the horrible reality of nothingness. We achieve this through repetition too, then gradual manipulation of perception. But this is the power the riff also…to beguile, or better still, obliterate.

The trance, to us, is just a gateway state for us to enter and alter your perceptions and reality.

Feedback is mind-destroying when used correctly as well.

What is it about Electric Wizard’s sound that transcends subcultures…so that punks, metal heads, freaks and weirdos all find something they can relate to in your music?

I think it’s because we don’t really care about subcultures…I come from a small town and you didn’t get to choose your friends based on their musical tastes. Basically all the weirdos and freaks had to stick together or your were on your own. Maybe that comes across in the music…we certainly aren’t that defined musically genre-wise. We are 100% Electric Wizard music…it’s recognizable.

And it’s obviously outsider music…I mean, all notions of slickness and decency are left at the door. Not giving a fuck about what people think is mental freedom…it is liberation and revolution.

What made you realize that you had something to say through music?

Probably when I realized I can barely communicate at all verbally.

What are Electric Wizard’s tour plans for 2014? Do you have any North American tour plans? Come to Vancouver, we have the best buds in the world!!

In Europe and the UK we are doing a bunch of festivals, then we will probably do a few select UK dates outside London. But yeah, a North American tour is planned for the end of the year and then maybe South America in the new year. Playing Canada is difficult..we hope to play there, but last time Mark & I were refused entry (eventually we went over another bridge in a taxi pretending to be tourists..haha)…but of course, bud is an important incentive.