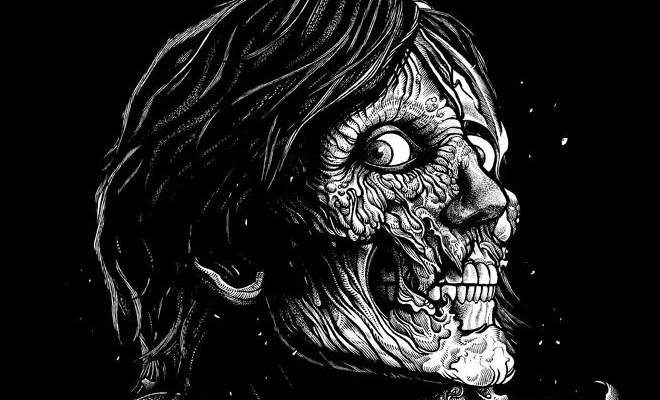 You guys just recently completed a tour supporting High On Fire and Kvelertak. What was the response like on that tour?

Overall it was great. We were playing first of three bands and you’d expect the crowd to show up slowly, but almost every night people were showing up early to catch our set. We couldn’t ask for anything better than that.

This past year you released your 3rd LP Grand Blood. I feel as if the song structure is a lot more complex on these songs. Did this record take longer to write? Did you guys do anything differently when it was time to start writing and recording this record?

The writing process for this album was all over the place. We worked on songs a little bit here and there between tours and when I was home from touring with my other bands, but we didn’t really get a whole lot done that way, other than some very basic ideas. When the time came to record, we just set up a chalk board in the rehearsal room, wrote every idea we had on the board and just went down the list until every idea was finished. The process was obviously different with the addition of Q on drums…I think he invigorated the band quite a bit. Q’s drumming on this record is insane. The drumming on the previous records is awesome as well, but he brings something new to the table and adds a whole new dimension to the Doomriders sound. What was it like having him behind the kit while writing?

It was great. Q has brought a new energy into the band that wasn’t there before. Not just in his drumming style, but on a personal level I think he’s helped us all get along better than we ever have before. As far as his drumming style goes, I think he’s the perfect drummer for this band. I remember the first time I saw him playing with Clouds…. I thought “THAT is the guy I want.”

The production on Grand Blood is flawless. How much influence would you say Kurt had in adding his touch?

Kurt always has an influence on the things he records. That’s why people go to him. His attention to detail – as far as how to get certain sounds, where to put the mics, what gear to use for specific sounds – that’s where he really shines. He has a way of putting his own stamp on a band’s sound, while the band still sounds like themselves.

“We Live In The Shadows” is definitely my favorite track off the record. Do you guys have a favorite off the new record yet? Are there any songs off the record you absolutely love, but maybe don’t go over that well live? And vice versa?

I think we all have our personal favorites. For myself….. lyrically “Grand Blood” and “Dead Friends” are favorites. Overall, I’m proud of every song on the record, but playing “We Live In The Shadows” and “Bad Vibes” is always fun. We haven’t played every song on the album live yet, but that’s the case with all of our records, to be honest. I don’t think it would be possible for us to do “Father Midnight” because there is so much layered guitar. The artwork for Darkness Come Alive and Grand Blood, done by the magnificent Thomas Hooper, share a lot of similarities in themes. Was this intentional?

Yes. Generally speaking, I just give Thomas a very loose idea and let him go to town with it. This record was no different. He wanted to expand on the visual theme of Darkness Come Alive but deconstructing the elements he used on it. On Darkness we see a “king” on the cover, on Grand Blood we see the “king” as a pile of bones with a broken crown as a theme across the entire album visually. I’m no artist, and I couldn’t begin to explain Thomas’s thought process though.

You’re going to be touring around Temples Fest with Beastmilk and Herder. All 3 bands have a very distinct and unique sound. Did you request to tour with these bands, or was it something that just came together?

We did. I’ve been following Beastmilk since they released their demo a few years ago and the album Kurt recorded for them is probably my favorite of last year. They were my first choice, and when they said yes we were all pretty excited. Herder is a great band that my friend Johann from Reflections records turned me onto. I heard them and immediately thought “We need to get these guys on the road!”. Thankfully everyone was able to make it work. It’s gonna be a fun one.

Who are you most excited to see at Temples Fest?

Unfortunately, we’re only going to be there for our day, but any time I get to watch Clutch play it’s a treat. They are a fantastic live band. Repulsion always puts on a good show. Our friends in The Secret never disappoint. Oathbreaker is always great as well. Nate, 2014 seems to be a pretty busy year for you. I’m sure Converge will be hitting the road again, Doomriders just put out Grand Blood not too long ago, and I saw you recently joined Cavalera Conspiracy. How do you find the time to handle all of these projects? Especially being that you’ve been grinding this hard for many years now, how do you continue to find the drive to keep doing what you’re doing?

Just to clarify….. I only recorded on the Cavalera Conspiracy album. It was a fairly quick process but I was honored to be a part of it. I’m not sure if there will be any touring to support it, or if I’ll be included, but I’d be happy to do it if I can make it work with my schedule. 2014 hasn’t been as busy musically as some other years have, but I recently had my first child and that is far busier than any band. As far as finding the time, it’s just a matter of looking at a calendar and figuring out if it’s possible. Finding the drive? It all just comes from the love of making music. I wouldn’t call it “grinding”, I’m just doing what I want to be doing. I’m lucky.

Can we expect anything else from Doomriders this year, or will you guys be hanging out while you exercise other projects?

We’ll certainly be writing music as the year goes on. I’m not sure there will be any recording this year. Fall is wide open at this point so I wouldn’t be surprised if a little touring or some more shows happened.

That’s all I got for you. Thanks for taking the time to do this.

Thanks for the interview!