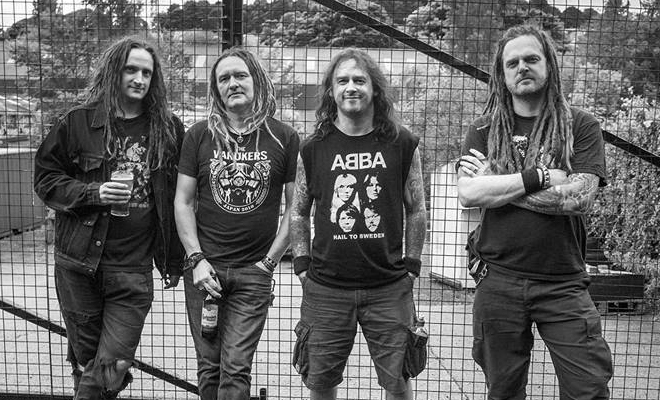 Is it harder to keep down a job when your off gigging and sleeping on floors around Europe at every turn about? What have been the best experiences as a band?

SCOOT – Yeah, it’s mental trying fit work shifts around my job but we make it work somehow. Sleeping on floors nowadays though? Come on, we are too old, it’s 2014 – surely a mattress or sofa isn’t too much to ask?? 🙂 Best experiences? I’ve spent 6 yrs in Doom so far, and for me recording, hail to Sweden – writing and recording the new LP were some faves. Live, something seems to click these days when we are on form and I find it very satisfying. Denis gives the gigs a lot of energy, Stick and Bri obviously still have that knack of pummeling everything in sight too. Recently, Doom raised money via Bandcamp, reissuing the Police Bastard 7″ for a person wrongly imprisoned in Columbia. He was at death’s door, now he is “released” under house arrest, but at least out of the ghetto prison he was in – check the story out here…

BRI – I work part-time at a college, term time only, so I have to fit tours around school holidays. Quite difficult, but they are quite flexible if I want to take some extra days off/swap them around. I cannot sleep on floors anymore, too old. It’s not like we ask for warm towels and blue m&m’s, but a mattress or something soft to sleep on is a must. Like Scoot said, the help we were able to offer Luis in Columbia was pretty awesome, and receiving messages from all the world from people thanking us for inspiring them to form bands etc. always makes me feel good.

You’ve played some big festivals in this last while, but all very independent ones. Do you think diy punk ethos has spread into the more mainstream/underground music scenes? What do you think this ethic has had the most impact on?

SCOOT – Yeah, I think it has, some others might disagree with me but the internet has opened many pathways – should punk be just for the punks? We have met many people that got into the diy scene through hearing us or like-minded bands and this is what it’s all about. I have no problem doing a big fest anymore, as we know where our heart lies and I’d rather Doom play than some cock rock-minded band or someone singing about wizards and elves! 😀 Doom still play more diy gigs, we try do what we can, when we can!

BRI – Maybe it has, but I think the internet/technology has actually done a lot to make people/bands realize that you can record yourselves and distribute your music far and wide without someone exploiting you for money. I think it’s good that we get the opportunity to play big festivals, we’re lucky in that respect that we now get asked to. Otherwise it can feel a bit like you’re preaching to the converted a lot of the time. It’s good to be able to turn people onto underground music that they would normally never hear.

I see Denis’ vocals were recorded in Sweden – is it hard to write new songs and record with him living there? Could you tell us about who else appears on the new album?

BRI – Yes, it was quite difficult, but that was mainly down to bad communication. I ended up having to go to Sweden and oversee some of his recording in the end, as his first session wasn’t quite right. The actual technical side of things is pretty straightforward, but it was quite a stressful time for me. I always find it quite hard recording my own bands, it’s sometimes difficult to judge when you’re actually part of the songwriting process. The writer and performer on “Prey For Our Souls” is the anarchy-punk poet Andy T. Scoot has known him for years, but I only recently got to know him when I recorded his last album. Now I consider him a good friend and a very talented one at that, so it was a great when he agreed to write us a poem and to perform it for us. I actually recorded his vocals in his front room, as he only lives a few miles away. “Fag Ash Lil” who does the spoken word on “Corrupt Fucking System,” lives even closer…as that is Lisa, my wife! I wrote the lyrics to CFS with the old Antisect style in mind, Denis said he wouldn’t be able to pull it off so I asked Lisa. It’s not really her style, as she has a very gruff vocal (Corpus Vile). But we did a few takes in different styles and this one seemed to work best as I’d imagined it. On “Yes, They Still Test on Dogs,” Charlie (Anti Cimex) added some backing vocals (in Denis’s front room, after I’d just beaten everyone at 10 pin bowling!).