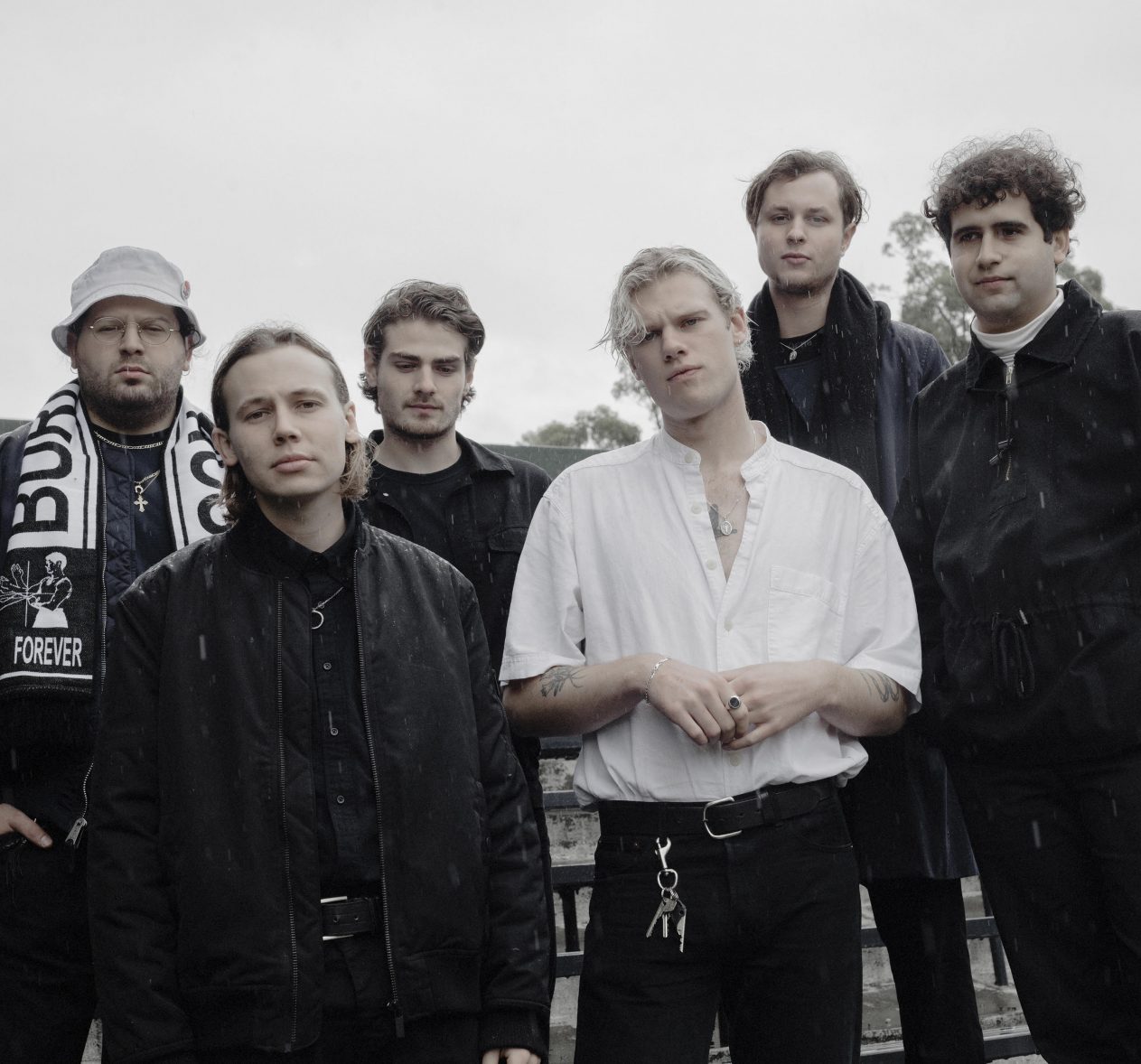 Each week it seems that a new post-punk/dream pop/new wave song catches my ear and reminds me of the unlimited well of music waiting to be heard. After the latest Miserable tour was announced, I realized I had been tragically overlooking Sydney, Australia’s Death Bells. The sextet released a self-titled EP in 2016 followed by a full-length, Standing At The Edge Of The World, and are already preparing for their next record–all in the midst of touring and relocating to Los Angeles. In the same realm as Drab Majesty, Them Are Us Too and Wax Idols, Death Bells’ music harks to the 80s origins of its ancestral sounds while propelling toward the future in a vein completely their own. Vocalist Will Canning talked to us before the band makes their journey across the ocean for their upcoming tour… It’s been just over two years since the self titled EP and you recently released a new 7”. How has the band grown or changed in that short time?

WC: I think we’ve gotten much better at playing our instruments. The music we are writing now is much more dynamic and exciting. When we did the first EP, we were quite limited with what we could actually produce. Between us we had no technical knowledge, a drum machine and a few guitars. It was a bedroom record. We’re moving into proper studio territory now. We want to make very glamorous music.

As far as our personal relationships go, it feels like we have a lot of shared memories. It’s like old friends getting together to do something we all enjoy. That’s a nice feeling to share.

Do you hope people feel a certain way or think about anything particular when listening to Death Bells?

WC: Not exactly. I know how the music makes me feel when we perform; it’s a very cathartic process, like exorcising all the bad and letting all that’s positive take hold. People have told us many times that they relate to the music more once they watch us play. Maybe that personal catharsis takes the music some place more real. The short answer is no, though. We make the music because we like making the music and people can take away from it whatever they want.

It’s a broad question, but what inspires you when you write and create music?

WC: It’s a necessity at this point. I don’t think any of us are happy unless we’re making art in some way.

Standing At The Edge Of The World is still a fairly young record, but have you started writing or thinking about the next one yet?

WC: The next one is mostly written at this point. I’m not going to speak too much about it yet, but this is a very exciting time for us.

What’s the creative process like in a band with 6 members?

WC: It can be chaotic or messy but beautiful things often come about from the mess. Usually Maurice will come to rehearsal with a bass part and we’ll start to piece together ideas around that. Everyone sticks to their instrument now which is nice; all the ego has been squashed over the last four years. We focus now on just doing our own little bit as best we can to build the whole.

There’s such a tight knit and incredible new wave/post-punk scene in and surrounding LA and in California in general, including fellow Australian-turned-LA experimental post-punks VOWWS. What are you most looking forward to about the band’s move there?

WC: We like VOWWS a lot, we played with them in Austin. Los Angeles feels very homey. I think it’s like a big Sydney in many ways. The scale of that city always leaves us feeling bewildered and perplexed. I’m looking forward to feeling that way for a while.

You’re touring with Miserable and Fearing next month and playing HOCO Fest soon after. What can we expect in the near future for Death Bells?

WC: Everyone in every city who has been waiting to see us will probably have the chance by the end of the year. A lot of things are up in the air right now, but we all hope to see it solidify. We’re just gonna be around. Come and say hello.