Dead To A Dying World is cinematic in scale and even mightier in the tales its many moving parts manage to weave. The seven-piece ensemble concocts a sonic experience that is equal parts sunlight as shadow; they intertwine the heartbreak of the viola with the damning punishment of black metal riffs to create an emotionally captivating moment that draws both aggression and sadness from within. Dead To A Dying World make metal deeply, complexly beautiful. At Austin Terror Fest, we chatted with James Magruder, Sean Mehl, Eva Vonne and Mike Yeager about the band’s scope, storytelling and their 2017 plans.

What is the purpose of this band to you? Is there a message? What do you hope to impart to people?

James Magruder: I think everyone in the band has their bouts with the dark side, and I think it’s our way of coping with that sadness or depression or whatever it is that we all go through from time to time. I think it’s a cathartic thing for us to write and perform the music and we would hope that it would help others who have the same issues. There are a lot of elements – and a lot of people – in this band. Was it intended to be this complex, large-scale project?

Sean Mehl: It wasn’t. It started off with me writing a bunch of material, and eventually I was asking a lot of my friends and people I looked up to in the local DFW scene just to kind of contribute. It really just snowballed from there. James, I think, was one of the first ones I hit up and we instantly clicked and it just grew and grew.

James: But you always wrote it as a seven-piece. [Laughs]

Sean: Yeah, it was always big in scale but it didn’t start off as a whole band with this mission that we were doing. It just kind of fell all into place. I think that’s a strength – the way that that happened.

James: It was just supposed to be a studio project, but I guess we liked each other or whatever. [Laughs]

How do you all translate your emotions and experiences in life into the sound of the band?

Eva Vonne: If anything, the nature of my instrument lends itself to that. I just play weepy strings. Harmonize a lot. Playing live, it makes sense to play simple and weepy because that’s what is easiest to play with this ensemble – it doesn’t get lost. It really stands out if I try to do that.

Sean: I think for me, at last for our early material that I was primarily writing myself, that was really the only way I knew to express a lot of the darkness and a lot of the things that were going on in my life. I’m not really a writer, I’m not a lyricist, but that is how I felt I was able to express my emotions in a way that made sense to me. I think the great part about that is, with really any work of art, is that different people can take away different things. Just because that’s what it means to me doesn’t mean that’s what someone else is going to get from it.

James: Yeah, we’ve had a lot of responses to our record that are like, Oh, well that’s about… and we’re like, Yeah, sure, maybe not what we were going for, but cool!

Eva: I think Sean’s a really special person. He’s able to find the best in people and bring that out in them. Or make an environment that fosters creativity. I feel like we all have this innate sense of the direction and we’re all able to express it. Because of each other, it really brings out the best.

Why is the contrast of light and dark important?

James: I think that’s just life itself. There’s light and there’s darkness. There’s sorrow and happiness and hope and despair. Without one you can’t have the other. I think we try to express the entire range of human emotion instead of just all darkness or all despair. There’s also hope. Having seven people in the band, it seems like things could get over-complicated very quickly. How do you avoid that? Or do you?

James: Fighting. We do it through fighting each other. Physically [Laughs] No, I’m, just kidding.

Eva: There’s not only a lot of us, but we’re also separated geographically by a lot of space.

All in Texas, though?

James: No, she lives in Oregon now!

Oh! A little out of the way…

James: It is like family. We get into our bouts, but so does everybody. That’s what friends do.

Sean: And if they piss us off enough, we’ll kick ‘em out!

James: Alright, there it is! There always seem to be storylines in your songs. Ups and downs. There’s no monotony. Do scores and soundtracks to movies at all inspire writing and recording?

James: I love soundtracks. Jurassic Park. [Laughs] No, I like John Williams’ stuff. It’s a little more mainstream, but I do like it.

James: Yeah, Vangelis – Blade Runner. That is an incredible soundtrack. I mean, I think we both (Sean) have definitely talked about how movies would be different if they had a more atmospheric metal soundtrack to them and how it would change the presentation and the mood of the film. Honestly, I would love to be on a soundtrack of a good movie. [Laughs] A good film.

Whenever you listen to your music what visuals come to mind?

Eva: Well, we kind of write them with that in mind. We start off with a concept and kind of fulfill the story. We don’t set out, necessarily, to make the song sound a certain way, but we do talk about it.

Sean: There’s always an underlying intent for whatever musical works we’re doing to tell a story and take you on a journey – emotionally, spiritually, whatever. I think that may emerge from our influences. Cormac McCarthy’s The Road.

James: That’s a huge one for us.

Sean: It’s a huge one. I think just the style of the way that story is told evokes a certain feeling emotionally. I think we try to accomplish that in our songs, especially being more lengthy, to take you someplace. We have some shorter songs and we could try to write something shorter, but I don’t think we would accomplish what we were trying to accomplish that way.

James: I don’t even know how to do that.

Eva: I’ve never been in a band with short songs.

James: I’ve never been in a band that wasn’t about the end of the world, either. [Laughs]

Lyrically, there’s a lot of reference to nature and environmentalism and to humanity being generally dark. Is it important when you write lyrics that there’s substance and a message?

Mike: Absolutely. I believe so. I believe that there’s multiple layers to the meaning. There’s multiple levels of interpretation. You can look at it on the surface level as being environmentalist and sociopolitical, but you can also look at it from an internal perspective relating to how we interact as people and how we experience emotion. I try to instill that when we write lyrics. James and I end up writing a lot of the lyrics together and Heidi (Moore). That’s always very important to us: to make sure there’s multiple layers of meaning, but continuity.

Mike: But we definitely try to make sure there’s continuity. And I think that storyline is something that is…

Eva: You start off with a skeleton idea, don’t you?

Mike: A loose idea and go from there. There’s an overall, arching storyline because it’s easy to identify with and it’s fun to portray it as such because it’s something that we enjoy as far as literature and movies. Are you working on new music? What are your plans for the rest of the year?

James: We’re finishing up recording a cover for the reissue of our self-titled record, our first one. It’s a Leonard Cohen song that we’re going to finish on Monday and we’re going to play it tonight (at Austin Terror Fest). We have plans to, by the end of the year, finish our third full-length, which is, as of yet, unnamed.

James: Write and record. How about that?

Eva: It’s going to be done!

James: It’s going to get done!

Is there anything else you want to mention? Other shows?

James: We are playing 71 Grind in June. More importantly, we would like to thank Sean and Meghan at CVLT Nation for being so good to us. They’ve always been there for us and we really appreciate it. Oh! And we got a new drummer. Josh Dawkins. Look! There he is!

You got thrown in at the very end! 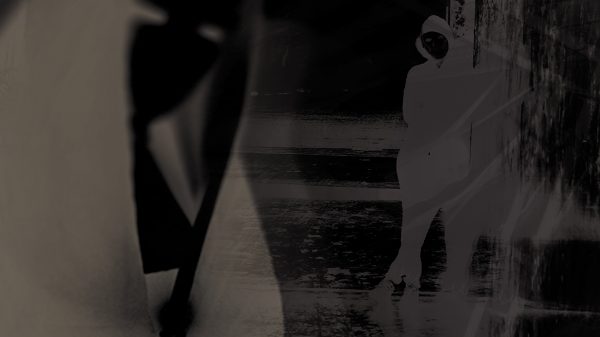 We all deal with loss in our own way, and over the past year and a half, so many of us have lost so...