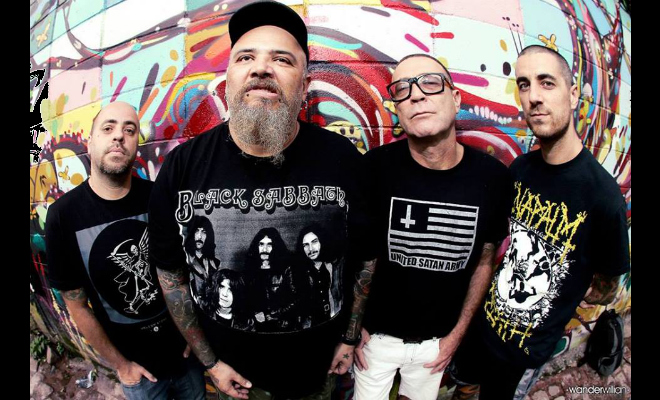 With more than 30 years on the road, Ratos de Porão is a true institution of heavy music and one of the most important bands in Brazil, mixing hardcore with metal, grind, crust, punk, among other styles.

Despite this long career, the band is more active than ever. In 2014, they released the great record Século Sinistro (through Alternative Tentacles) and also played a lot of concerts in Brazil, including some special ones with their original lineup to celebrate the 30th anniversary of the classic album Crucificados pelo Sistema.

Besides all this, they just returned from a mini tour in the United States, that included a concert at the Maryland Deathfest and a visit to the “Dischord house” with the living legend Ian MacKaye.

On this interview, the drummer Boka talks about the writing process for the new record, how was to play without their guitar player and founder Jão in US (he couldn’t go on the trip because of bureaucratic problems), the records that changed his life and what are the next plans of the band, among other things.

Ratos de Porão recently released Século Sinistro (2014), your first record since 2006, when Homem Inimigo do Homem came out (in 2010, they released a split with Looking for an Answer). How was to record everything on analogic at the Family Mob Studio, in São Paulo? Are you happy with the “final product”? The album sounds really, really heavy.

Yeah, man. I really liked the final result. It’s different from our previous recordings, but it still has our style. About the analogic thing, I don’t have much to say about it since almost all the albums I recorded in my life were this way.

The entire process, since the pre-production until the record release, was pretty fast. Why did it take so long to release another record?

We had a difficult time gathering everybody together so we could write and rehearse. I blame a little bit of that on our own lack of organization. That’s why we took so much time to do the record.

In a recent interview, João Gordo (vocalist of RDP) said that you and Juninho (bass player of RDP) brought some influences from the COC’s self-titled record (released in 2012), something a little bit slower than your usual sound. How was the writing process for Século Sinistro? And do you usually bring ideas that are already finished to the rehearsals or do you guys create everything together?

Well, this time I proposed that we would write separately, specially because of these problems that I told you before on the previous question. Usually somenone goes to the rehearsal with an idea and then we start from there. On this last record, we did this separately because it was hard to get everybody together to write. About our influence on the record (mine and Juninho’s), it’s not really connected to the speed of the songs, but to the challenge. I think we like to have some kind of challenge when we are playing, something that makes us evolve as musicians. Jão (guitar player of RDP) and Gordo, on the other hand, are more focused on creating songs that they enjoy. I think that’s the main difference.

Your record Brasil (1989) will be 25 years old in 2014 and it sounds more immediate and present than ever, specially with the World Cup happening in Brazil this year. Do you think about doing some special concerts playing the whole album? You’ve done this one time in 2012, right?

Nobody talked about it yet. It’s a cool idea, but we’re now promoting the new record, so this could be a little bit conflictive.

You guys already worked with some well-known producers like Billy Anderson and Alex Newport. Is there another one with who you want to work with? You recently did a mini tour in US, during which you played at the Maryland Deathfest (MDF) and even went to the “Dischord house” to meet Ian Mackaye and everything. How was the trip? And it was strange to play without Jão?

It was a bummer to play without Jão, but for everything that this trip represented it was decided to go without him. Estevam (who plays in Desalmado and replaced Jão on the tour) was really good. He gave 100% at the concerts and that was the main thing for everybody. We are really grateful to him for that. It was a quick trip, with two concerts and another one booked at the last minute. It’s always good to play for different audiences. The response at the MDF was really great! The other concerts were also cool and each one had its own singularities. What are your biggest influences as a drummer? For what I’ve seen on your Facebook page, you’re really into Nicko McBrain, from Iron Maiden, and Ben Koller from Converge.

I think that at the beginning, my influences came from the American crossover and the grind/crust English bands. I was really into Heresy, Napalm Death, Intense Degree, DRI, COC, Hirax and Wehrmacht, among others. About Nicko, he’s definitely a big and eternal influence, since I’m a big Maiden fan. Koller is a more recent influence. I’m not only a fan of his playing style, but also of Converge, so you can say he influences me.

I’ve read recently that you guys are going to release a split with Cripple Bastards through Relapse Records. How did that happened and do you have more info about it?

We’re working so it can happen, but it’s not a 100% closed deal as far as I’m concerned. The idea came from Giulio, the singer of Cripple Bastards. I hope it happens! Besides playing in RDP, you’re also the owner of the label/distro Pecúlio Discos since 1997. How do you divide your time and is there any release planned for the rest of the year?

My next release is the latest record from Vitamin X – it will come out on CD. I’m also thinking about reissuing some stuff and I have a surprise that will be announced sometime soon. About dividing my time, there are no issues. During the week I work at Pecúlio; on the weekends, I play with RDP. When I’m going on tour, I just close the store and come back with a lot of new stuff from the other countries we’ve played.

Now I want you to tell me three records that changed your life and why they did it.

The first one is Iron Fist (1982), from Motörhead. Simply because it scared me. I was used to listening only to AC/DC and Iron Maiden, so this is the record that probably got me in touch with the more heavy and noisy stuff. Another one is Powerslave (1984), from Iron Maiden. It was the first time that I’ve literally listened to a record every day for months. And the last one is Slayer’s Reign in Blood (1986). What a fucking record!!!!

By the way, do you have a favorite one with RDP?

I think that Brasil is our best record.

You guys did a special concert in São Paulo last month, to release the new record. The opening band was Test, one of the most well known bands from the Brazilian underground scene. What other new bands from Brazil would you recommend to somebody that doesn’t know our scene well?

There’s a lot of good bands. I enjoy some bands like Cursed Slaughter, The Black Coffins (RIP), Lo-Fi, Surra, and many, many others.

You already released a documentary about RDP, called Guidable, that’s really good, by the way. Any chance of making a book about the band?

We haven’t discussed that yet, but it’s something that may happen. I believe it’s inevitable.

To keep going. Maybe I’m not proud, but happy with it. This makes me feel good.