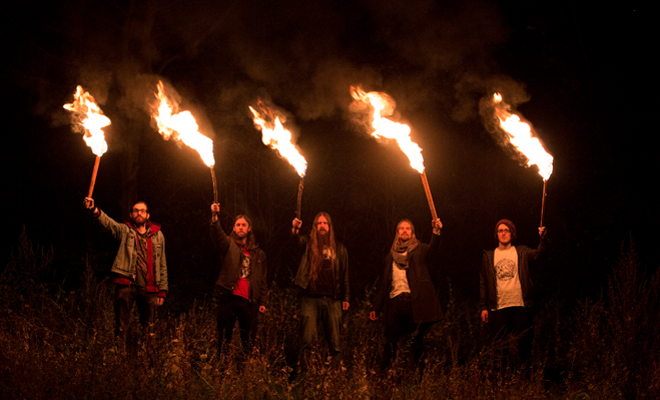 Hi guys! Thanks for finding the time to do this interview, it is really appreciated! Would you like to introduce the band?

Dave: I’m Dave… I’m responsible for the bass and vocals.

Mike V: Guitarist, and then we have Ben Freeth, who plays Shaaji Baaja and Mike Smith, who controls the tempo, Drummer.

You seem to be working quite fast on new material, since your last two albums were released with an interval of about four months. How would you compare Stoner Rock to Idle Days of the Yann and with Mana-Yood-Sushai?

Dave: Idle Days on the Yann is an old recording given new life… Stoner Rock continues the cleaner sound of Mana-Yood-Sushai, but stripped-down to the essence.

Mike V: The guitar sonics have been increased, in order to simulate the pressure of deep space. Less ethereal, the gods are dead, long live the abyss. Have you ever thought of your music as a vehicle for time travel?

Dave: In a sense, yes… If time appears to be standing still for a few minutes, you’re traveling more slowly relative to those outside.

Mike V: Time travel in the physical, is assumed to be impossible, lower dimensional space has its limitations.

When it comes to the title of the album, why did you name it Stoner Rock? What message are you sending to the listeners?

Dave: “Getting stoned needn’t be about riding dune buggies and going ‘woah yeah’. If you’re properly stoned, one chord is more than enough to handle”.

Mike V: Exactly, ‘stoner rock’ as a description, is so stagnant and uninteresting, it needed more absolutes and extremes.

Would you define yourselves as a stoner rock band?

Dave: Not really in the usual sense… It’s not a helpful definition when you’re trying to describe the music. The definition is the problem.

Mike V: The definition is most definitely the problem.

Can you give us some insight on the production stage of Stoner Rock? Where was it recorded, mixed and mastered, and which engineer(s) did you choose?

Dave: The studio we used is called Blank Studios, in Newcastle. We recorded it locally for logistical reasons.

Mike V: The album was recorded, mixed and mastered by Sam Grant. He knew exactly what we wanted and what to expect from us. He helped us set up the room just right. What are the lyrical concepts you deal with on this album? I think I detect some Lovecraft-ian influence on “Out of the Aeons,” and “Polaris” refers to the North Star.

Dave: Both tales are straight from Lovecraft. I base the lyrics and themes on stories that have caught my imagination recently.

The artwork for the album is really cool, giving it a sort of mystical aura. Which artist did you use for it?

Dave: The artwork is by a Polish chap called Zdzisław Beksiński. His art has a wonderful otherwordly feel.

How does the creative process work in Bong? Do you jam together and rely on improvisation?

Dave: We try out a riff for a while and see where it goes, try to remember it for next time and go from there.

Mike V: Our songs will build over time, the more we play, the more control we have. We take time to reflect on what has transpired.

Dave: Yeah, there’s a band called Rain Drinkers from the US that I have been listening to every day for months now… Strange drone with minimal brass.

Do you currently have any plans for future releases? Any splits or EPs?

We have just released Stoner Rock on CD and Vinyl, later this year we will start making plans for our next album for Ritual. We like to spend time on building a concept or a idea for a album, this takes place before any music is written or recorded. Do you have any upcoming gigs?

We are supporting Electric Moon on their UK/Euro Tour, in Manchester and possibly Sheffield, as well as playing Roadburn 2014 and Supernormal 2014 festivals.

If you could be an alien or a super hero, which one would it be and why?

Dave: I would be Kriss Akabusi. My hurdling powers would be unmatched in a brief period at the beginning of the 90s.

What are your views on the legalization of cannabis in the UK?

Dave: I’d feel a bit less cool smoking weed outside pubs, but that would be a small price to pay.

Mike V: Can’t really see it happening myself. But you can always dream.

Alright guys! Thanks again very much for finding the time to answer my questions! All the best to you and hopefully I will see you performing live soon!

Dave: Many thanks for the interview! Cheers!