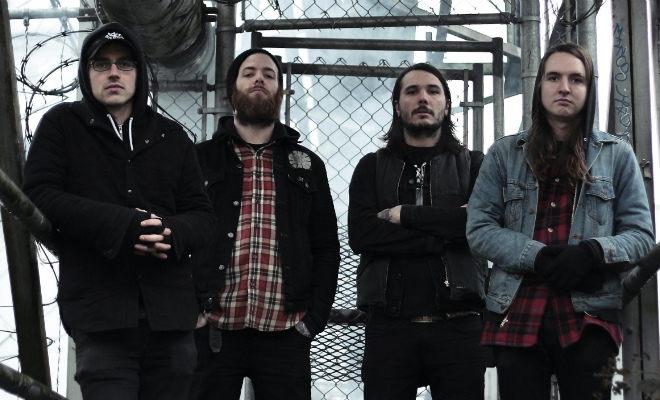 Direct from Vancouver, the same city as the legendary DOA, comes one of the best new hardcore/crust bands, Baptists. With an “ugly” sound in the best possible way, the group is getting more attention since last year, when they released the amazing Bushcraft, produced by Kurt Ballou.

In the same “fast vibe” of their sound, Baptists have already recorded a new album this year that should be released in September, once again with the production of Converge’s guitar player in his GodCity Studio.

A few weeks ago, I had the chance to interview Baptists’ great drummer, Mr. Nick Yacyshyn, who talked about their new record, how it felt to be publicly complemented by his idol Dave Grohl, and his new project with Aaron Turner (Isis) and Brian Cook (Botch/Russian Circles), among other things.

You recorded a new album this year, called “Bloodmines”. What can we expect from this new record? You posted some nice pictures from the recordings in Salem.

You can expect a lot of energy in not a lot of minutes. We explored some different territory on this album, but tried to keep it cohesive and engaging. And how was it working again with Kurt Ballou? “Bushcraft” has a tremendous sound!

We were really happy with our whole experience with Kurt while recording Bushcraft, and this time was no different. He has a great way of doing things there and we’re lucky to record our music with him.

What is your writing process? Do you guys usually bring finished ideas to rehearsals or do you tend to create something from a jam with everybody in the room?

Our writing process for this album involved Danny sitting in his bathtub with his guitar and and a mini Orange rig, creating riffs in the bathroom. The three of us instrument players then work on whatever he brings to jam, until it becomes a part and then go from there. If one of us has an idea, we tend to try it all out and see every option through. Our singer Andrew can’t sit still for very long, so when he’s not thinking of things to yell, he’s dancing or lighting his pants on fire.

As Kurt Ballou is also a musician, most notably from a great band like Converge, is there anything specifically he brings to your sound when you’re in the studio? I ask that because I can hear something of Converge in a few of your songs.

Aside from him being in one of our favorite bands and influencing us all from years before we ever thought we’d meet the guy or get to record with him, there’s nothing too specific he does with our sound, I guess. He just knows how to make everything sound good, and knows all the ins and outs of his studio and every piece of gear in it. He did, however, do one single bent-note guitar part on our new record, and also a pick slide!

You recently posted a picture saying you’re working in a new project with Aaron Turner (Isis). Can you tell me something about it? I didn’t even know that Aaron also played drums, haha.

I recently just spent a week writing/rehearsing and recording with Aaron in the Seattle area for an album we had originally talked about making earlier in the year. Aaron is playing guitar and doing vocals, and Brian Cook (Russian Circles, etc) is playing bass and hopefully doing vocals. He will be recording his parts in a few weeks. The whole nature of the project is unique to me and I couldn’t be more stoked to see how it all pans out. As far as Aaron playing drums goes, he wanted to pass on that, he is the best drummer in the world.

Besides that, you now have a new band called The Blood River Band, with a more southern rock vibe. How many bands are you playing in right now? And how do you find time to do all this?

I usually only keep 2, sometimes 3 bands active at a time. I try to balance my music with the other important things in my life and working full time as best as I can, so I don’t like to push it like I used to. The Blood River stuff is really fun to do and we have a great group of guys involved, many of which are busy with other bands, so that helps keep it easy going.

You’re going to play on the Southwest Terror Fest bill in October, with one of the greatest lineups of the year, including Neurosis, Sunn, Goatsnake and Pelican. What are your expectations for it? You think that all the diversity of your music allows you guys to play with all these different (and slower) bands? I mean, you’re clearly not a typical hardcore/crust band.

I’m looking forward to it! We’re really stoked to be a part of this line up. I think all of these bands are diverse, but that’s what it takes to make a great show. It’s hard to gauge how other people receive your music, or what it sounds like to new ears, but we’re very happy to be included in things like this.

Over the last year and a half, you guys have been getting bigger and receiving more attention, right? Do you consider “Bushcraft” as a turning point in your career?

We’ve been very fortunate to have amazing people supporting us since we’ve started, and having an LP come out and be received with such positivity is great. I think when our first 7″ came out, it was a good example of what we were doing, but we were also a very new band at that point. Bushcraft was the culmination of the 2 years of being a band since recording the 7″, and was a better representation of us in general. I guess I see it as more of an accurate introduction than a turning point. How is the scene over there in Vancouver? And what bands do you consider to be Baptists’s “kindred spirits”?

The scene here is very active. There are a lot of good bands going right now and a lot of shows. As far as kindred spirits go, there’s a band called Waingro that we are super buds with, and Danny and I’s other band Erosion is another pack of great dudes. There’s also these guys from the US called Griever that I would like to include in that category.

I always ask this one. Please tell me three records that changed your life and why.

These questions are brutal and my answers will always vary, but I’ll give it a shot.

While not my necessarily my favorite album of theirs, I will always consider this the one that started it all. The cover blew me away and the back cover had those letters concerning each band member. They were from club owners, mayors’ daughters, teachers all complaining about the guys in the band being shitheads. It rules. I remember that when I heard this, I knew I either wanted to play the drums or the bagpipes.

I guess I got into the Black Album first, but let’s not talk about THAT. This one was the first ‘old’ Metallica album I got when I was 12, after I learned a bit more about the band and about the first four records. The guitars on this album sounded so crunchy and cool, and there were double bass drums! That one break in “Fight Fire With Fire” was a real head turner. I know there are lots of Lars haters out there and that is totally fair, but his playing was a huge inspiration to me when I was starting out.

This album introduced me to a lot of great things and along with bands like Botch and Converge, forged my love and appreciation for boundary-pushing music. My friend Blake showed me the song “Destro’s Secret” when I was in high school, and it scared the shit out of me. I had never heard drumming like it, and it opened up my mind to all extremes of speed and density on the drum set. Relentless, brutal and super challenging.


When did you start to play? And what were your influences back then?

I started off drumming in the summer between Grade 4 and 5 when I was 10 years old. My dad got me an instructional video of how to play a rock beat and a pair of sticks, and I just practiced on a shoe box and a phone book and whatever else until I got the beat down. When I got some real drums, I played along to old rock and roll stuff. Zeppelin, Deep Purple, Nazareth, AC/DC, Sabbath, Guns N’ Roses. That music was a really great way to be introduced to an instrument like the drums. Lots of tasteful playing and also a few drum solos in there, too!

A few months ago, Dave Grohl said that you were his new favorite drummer. Did you by any chance talk to him after that? And are you into his work as a drummer on Nirvana, Scream, Probot, Killing Joke, QOTSA, etc?

I actually sent him an email after that happened just to say “holy shit-thank you-ughhhh” and he sent me one back that will forever be the most insane thing I’ve ever read. And yes I am very much into his drumming! I listen to his music all the time. He’s been a major influence to me not only as a drummer, but as a multi-faceted musician for a long time, so hearing something like that from him was unreal. I’ve definitely downloaded music, but I also buy a lot of records. I don’t mind people getting my music from blogs or other sites if that means that they hear it, and often times the people that truly get it will want to buy a physical copy of it. I’ve never been on the releasing/label side of things, so the monetary impact of that hasn’t been on my plate. In my case, if a label has put something out for me, I’ve been relatively off the hook once the album costs are re-couped. I imagine the ever evolving ways media can be consumed poses a great challenge to anyone involved in releasing and promoting material, though, especially with less than mainstream audiences.

I am most proud of the fact that I get to talk to people like yourself, from all different parts of the world, just based on music that I make with my friends. I get a huge thrill out of connecting with people that enjoy what I do and feel very lucky to have an outlet to do so.