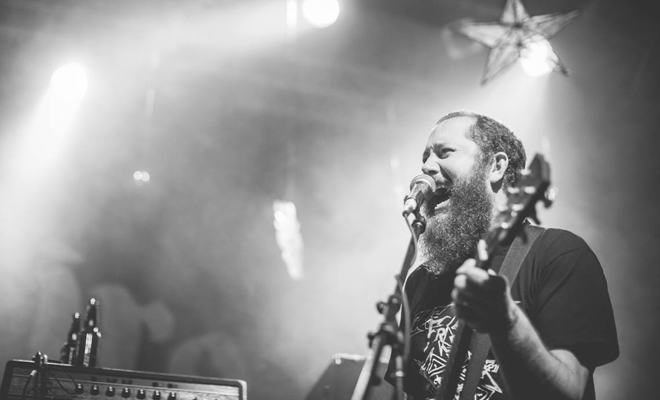 What drew you to music in the first place? Were you in the school band as a kid?

My parents’ record collection was tight. I still have the bulk of it, and it still makes up the majority of my record collection…crucial. My mom was pretty heavy into Tom Petty, The Pretenders, Fleetwood Mac, Bob Marley, Robert Palmer, Bowie, etc…my dad was Deep Purple, Allman Bros, Neil Young, 38 Special, Sabbath, etc. We also listened to a lot of chill folky stuff like The Band, Bruce Cockburn, the Ozark Mountain Daredevils and Gordon Lightfoot. So music in the house was a constant, and was always pretty cool classic rock…easy to get stoked on music having this kind of childhood/cool parents.

I was never in the school band. I did do some choir for a bit I think? Took a few years of piano lessons and maybe a few months of classical guitar lessons as a kid. Otherwise zero musical training, I suck shit at guitar.

Have you always been into metal? What non-metal makes it into your rotation?

In terms of heavy music, the first bands I got into were Slayer, Ministry, Helmet, Alice in Chains, Motörhead, Metallica, Sabbath, Sepultura, Faith No More, etc. I’m 36, and those bands were all crucial especially at that time, when I was like 13-14ish. However, once I heard Napalm Death’s Utopia Banished, Cannibal Corpse Butchered at Birth and Morbid Angel Altars of Madness – everything I knew about music went out the window. After that, all I did was collect death/black metal/grind…still do…I listen to pretty much only early 90’s death/black metal and classic rock…I’m super boring and super stubborn about music now…but I know what I like, and rarely is music today in these genres done better. Those original, say, 100 albums from ’88-’98 are hard to top. Go listen to old Sinister, Suffocation, Cryptopsy, Assück, Autopsy, Sadistic Intent, Immolation, Bolt Thrower for example…retarded heavy…and real sounding. In my opinion, the coolest newer metal release is Craft Fuck the Universe…possibly my fave all time album…up there with Atma from Yob.

I also listened to punk, but kinda select bands I guess. Dead Kennedys, Misfits, Dayglos, Nomeansno, Dwarves – that’s about it haha. I am also a huge Turbonegro fan and an even bigger Manowar fan, so fuck off. And lastly, AC/DC is the best live band I have ever seen, hands down. I have seen almost all the bands I have ever wanted to see at some point, but AC/DC wins every fuckin’ time. Kenny and I were looking to do something a little more creative and heavy than what our previous band was doing. Boon was down, so we started writing some songs with Eug, the drummer from Black Wizard. It started to sound like proggy, classic rock, death metal? We were stoked. Then we just kinda hibernated and wrote/rehearsed for about a year before we played any shows. We had Cam from Burning Ghats do our Snakebeard 7″ cover art and a logo for the band. Once we had some music online, we booked a shit ton of gigs, I think like 20 shows in Vancouver in the first year – fuck it, ya know? We just played whenever we could. Our friends in bands like Burning Ghats, Galgamex, Black Wizard, Weirding, Anion, Baptists, 3 Inches of Blood and so on, really helped us out that first year with some sick gigs.

With the name, we just really liked it. Our music has that sound and it really fit the lyrics. We wanted something slightly artistic or creative sounding so we could bridge scenes and genres in terms of touring and press and etc. The extra “i” is just to keep things less complicated…Google search “Anciients,” it’s a barrage of us…Google search “Ancients” and it’s all sorts of shit plus some other bands…so whatev.

Who would you say are your biggest artistic influences? Why did you choose the title “Heart of Oak” for your debut?

It was a cool line from one of the songs and we were going through some insane tough times during the recording of the record. It just fit the vibe. Not a lot more to it. Has a lot to do with death in the family and just keeping your head down and crushing forward in the face of death and despair. Fuck cancer so hard.

How does it feel to be nominated for a Juno? (For our non-Canadian readers, a “Juno” is our version of a Grammy.) Are you going to be there?

It’s not very punk, but it feels great! We are proud Canadians so it’s awesome! It means our band is sorta crossing over, which is the unspoken goal; we want people of all kinds to enjoy our music and shows…what we do is heavy and intense and powerful, but not elitist or fucking evil-spirited. So we are open to all people getting stoked on the band. That being said, we aren’t going to have Rockstar energy drink sponsor our band directly anytime soon or anything retarded like that…some free shoes on occasion from Converse is pretty cool though haha.

We wont make it to the Junos, which sucks kinda, just not in the budget. Plus, we leave for Europe a few days later so it’s logistically impossible…they wont miss us I’m sure.

It is, however, an honor to be selected and we are up against our good friends and label mates: Gorguts and Ken Mode. Insane. Tell us about your insane year of tours you have coming up! What are you most excited about?

Last year we did: Death To All in april…Lamb Of God/Decapitated in May/June…Tesseract/Scale The Summit in Oct/Nov so we were busy as fuck. This year is looking no less insane. We have Europe all of April with ASG, including Roadburn and both Desertfests! Then we have a June/July cross-Canada tour that will be announced this coming week with Black Cobra and Black Wizard! August we have a mini west coast tour with 2 huge bands in our genre, stoked to announce that one! Looking at some festivals for the summer and a US tour in the fall before we hibernate and work on the next record. Looking at January for studio time currently, most likely will be recording with Jesse Gander (Rain City) again…we have one complete new song that we have been playing live recently, a 12-minuter haha…stoked!!!

What does your tour diet consist of?

I have a problem with whisky…I like it a lot…but then I turn into a total rowdy gong show and or pass the fuck out…so I keep my drinking in check these days…just a lot of coffee, stress and cigs. In this article:Anciients, interview, vaNCOUVER