Ambersmoke is a Californian shoegaze project by Chris Broyles, who recently added a second member, Cameron Puleo, to make it a duo. The band creates a miasma of experimental drones and textures while utilizing impactful samples to create a uniquely encapsulating atmosphere. Their newest album, The Great Nothing, was released on April 8th. The band was kind enough to reflect on the project and their upcoming tour.

Congrats on your new album, “The Great Nothing”. It sounds to me like this is your most carefully considered and crafted record yet. What went into the new album that sets it apart from the older releases?

Chris Broyles: Quite a bit was different. After our last record, Wear Your Love Like Heaven, I wanted to make a psychedelic pop album. I was being very experimental, but I couldn’t get into what I was making. I did about half an album and scrapped it. After working with a drummer during my live show for a bit, I ended that too, and then added Cameron. Cameron brings a lot of melodic and experimental elements to Ambersmoke. I wanted to create an album around what she brought to the table. This is the first time it’s been a collaboration. That sets it apart and helped this record come together neatly.

When did you decide to start contributing to Ambersmoke, Cameron?

Cameron Puleo: We had worked together musically in Airs, and I’ve really enjoyed everything Chris does as a musician. It was one of those things where when the opportunity presented itself, I was more than happy to contribute, but now it has stuck.

The record seems to continue the theme of floral imagery. You guys have described it as “Floral Drone.” The cover itself mentions “Psychedelic Bloom.” How does flora tie into the greater idea of what Ambersmoke is?

Chris: It started in 2013 when I was living in Northern California. The local scene was dominated by overly-masculine death metal, where everyone is trying to be tougher than everyone else. I thought that was such bullshit. I couldn’t handle it, so I started putting out tapes with all these photos of flowers that I had taken. I wanted to use imagery that would upset people in that scene, but it ended up backfiring a bit. Everyone loved it, and now there’s a bit of a micro-scene that does this stuff in that area. It just started because I like flowers. The bandcamp page describes the album as ‘floral drone.’ What is floral drone?

Chris: Well, it’s slightly tied to the idea I mentioned, but it can mean whatever you want it to mean. I don’t find a classification in our music, other than the droning sounds. I think it is a pretty combination of words, though.

This is the first release you did entirely without software. Why did you make that decision?

Chris: We’ve accumulated a lot of hardware for the past year or so. We have so much stuff now that we felt we had to start using it for something. All the drums and synths are from hardware of some sort and nothing is digitally synthesized. Creatively, we just had so much hardware now that it opened a lot of doors.

You two been involved with the band Airs in the past, as well as some other groups. Is Ambersmoke the only band you’re working on right now? Do you feel like Ambersmoke is starting to flourish more now that it has your undivided attention?

Chris: This has been what we’ve focused on, for sure. We’re always working on stuff, whether it’s under the Ambersmoke name or not. This just happened to be what we were working on and we felt that it fit under this project name. Like Cameron said, though, hopefully we’ll have that Airs record done some time this year. For most of Ambersmoke’s history, it was just you, Chris, or some revolving lineup, but now the act is a solid duo. How has the band’s sound changed because of this move?

Chris: It has had a huge effect in a lot of ways. First of all, live shows have been totally restructured. We’re really good at improvising off each other. Now we improvise almost half our live show. It has made live shows a lot more fun.

I mentioned melodies being more of a focus, but Cameron is really talented at creating textures. She thinks of things that I just don’t. Things that a lot of times even I doubt will work, but then we try it and it turns out to be a great idea. It really helped having her on the album because there were things I either didn’t want to try or seemed wrong to me, and she wanted to try them. It ended up making for a lot of really cool sounds.

Did compromise or giving up some of the creative control of Ambersmoke concern you?

Chris: We haven’t had any creative compromises, really. We’re not so much a band as we are two musicians bouncing ideas off each other. What comes out is what comes out.

How do you distinguish yourself in the heavy shoegaze landscape that is getting increasingly more popular, especially in your native California?

Chris: By not affiliating with anyone involved in shoegaze. They don’t like us very much and we don’t really like that scene. I think they think we’re weird.

You’re an avid collector of cassettes. What do you love about the medium compared to vinyl, CD, and digital?

Chris: It’s cheap. That’s the biggest appeal for me. Even as a producer of music, it’s great because you can get things out so fast. As a collector, if I’m choosing between a 40 dollar record and a 5 dollar tape, that’s easy for me. As an experimental musician, I’m not rolling in money, you know? (laughs) I don’t really listen to music digitally. I’d rather throw something on the stereo.

It seems like you’re into creative releases too. VHS tapes were a thing you used to do which I thought was different.  I’ve never seen anything like that cassette boxset with bottled foliage that you put out. Anything unique planned for “The Great Nothing”?

Chris: Yes, actually. We’re going to have a limited to 10 copies version of the record on a 7 inch reel. I’m a huge fan of vintage electronics and analog mediums. Admittedly, many of these are useless now, but I think they’re cool as collector’s pieces. They’re like a piece of history. We have a couple reel to reel machines and I think it would be cool to put this out. That’s the loose plan anyway, and that would come directly from my label. At the end of the week we’re picking up an 8 track recorder, so that could change. The standard release is coming from Social Stress records and they’ll be putting out 100 cassettes.

In this article:ambersmoke, social stress records, the great nothing 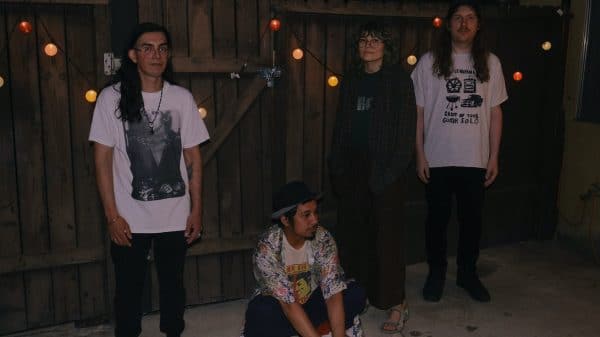 More than seven years ago, I discovered a band named AMBERSMOKE and I was instantly a fan. To me, they are one of the...

Most Important ShoeGaze release of 2017 Streaming:
AMBERSMOKE “Lay My Bones Beneath the Valley Oak”

Lay My Bones Beneath the Valley Oak by AMBERSMOKE is one of  most important shoegaze releases of 2017. Only limited to 50 cassettes, this... 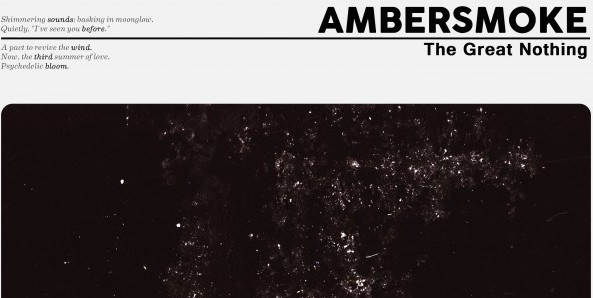 People sometimes make the assumption that all we listen to is heavy, heavier and heaviest music from dawn until dusk. The reality is that...