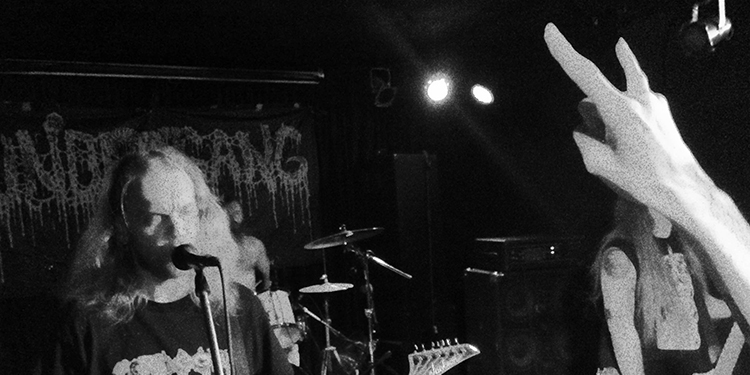 This is about as stacked as a death metal show can get: four killer bands, each with new material either just out or in the works, each playing sets just long enough to show off the variety of their respective material without overstaying their welcome. Originally slated for North Portland’s High Water Mark, it got moved to the newly re-opened Tonic Lounge which has a larger capacity and also what has to be the best sound in Portland for small metal shows right now. With a stage that comes to mid-shin and all monitors now suspended from the ceiling, the front of the stage ends up littered with bodies as the pit swells over (which it did, time and again). Denmark’s Undergang has been touring the US with Oakland’s Necrot for about a month now; Portland was the third-to-last night and both bands were sharp and in great form. Portland is lucky to have plenty of killer bands in its own right, and the two that opened this show fit the bill perfectly. Petrification
One of Portland’s newer acts, Petrification has quickly made a name for itself. Their demo tape (Summon Horrendous Destruction) sold out of its initial 100-print run before it was even officially released, so Sentient Ruin pressed another 100, which also sold out quickly. They’re putting the finishing touches on their debut full-length, set to come out on Sentient Ruin soon, and its one of my most-anticipated albums. Their set was a short 30-ish minutes, but they managed to get the crowd moving and happy right out of the gate. Every band member is a tight and energetic performer. The only band of the night to feature two guitar players, their sound was very full and bludgeoned everyone into one quick realization: tonight was a goddamn death metal show, so get ready. Blood Freak
If the world was just, Blood Freak would be on everyone’s radar. They have consistently put out solid, bizarre, inventive albums since 2003. Their upcoming album, Total Destruction Of The Human Form is a rager that has to see the dark of day pronto – people might not deserve it, but they need it. On stage tonight, frontman Maniac Neil kept himself to vocal duty, oscillating between guttural growls and bloodthirsty shrieks, while Kelly McLaughlin absolutely punished a killer-sounding double-amp setup. Blood Freak write riffs that make you unconsciously grin: for music so twisted and gore-drenched, it’s also just fun as hell.

UPDATE: Since writing this, there was a post on Blood Freak’s facebook page stating that this was their last show. Well, shit. I guess I’m glad I was there for it. Necrot
If you haven’t listened to Necrot’s new album, Blood Offerings, I implore you to stop wasting your time with whatever frivolous thing it is you fill your time with and play it now, loud. Every single song has at least one hook that will jam itself into your brain and plant its vile spawn inside your cerebral cortex (I think this is how it works; I am not a physician). On record, the leads are overdubbed, and I was wondering how the dual-guitar sound would translate to a live three-piece. Luckily, Luca’s insanely overdriven bass sound fills the air, and Sonny’s chops are so on point that you don’t have time to miss the rhythm guitar. Both stringmen are very physical on stage, and are obviously having a blast. Luca continuously encouraged the crowd to get close and go nuts, which it did: the pit was a frenzy of bodies that didn’t know what do with themselves. Bodies flopped onto the stage, gyrated widely, and fists were flung into the air. For a band at the tail end of a monthlong run, you’d expect these guys to be weary, but Chad’s drumming never missed a beat, and both Sonny and Luca spent most of the set grinning wildly. By the end of their set, the whole room was drenched in sweat and both guitar and bass were held into the mass of bodies to be pummeled and abused by a throng of devotees. This set was a highlight of the summer for sure. Undergang
Everything about Undergang is low: their imagery and motif is sub-sewer torture porn; their instruments are tuned down to bowel-loosening octaves, and the vocals can really only be compared to the toad-gurgles of Demilich. They craft riffs that seem to be straight-forward, but then lead lines that sound all the world like demented circus music pop out of nowhere. Their drummer also manages to work in genuinely surprising fills that catch you off guard. Live, they seemed to show a little wear from the tour, but they still threw themselves into their set. The between-song-banter was delivered in the same sub-sub-octave croak, so it could have been an introduction to the next song, or just the recipes for different types of soup. It honestly didn’t matter, as the overall vibe was so destructive that the crowd somehow UPPED the intensity from Necrot’s set, and about four songs in the “pit” was no longer a delineated entity, but basically the whole floor; every torso a wriggling part of a grateful and bloodied whole.

I would also like to note that at some point, someone threw a fidget spinner on stage, proving that these goddamn things really are everywhere.