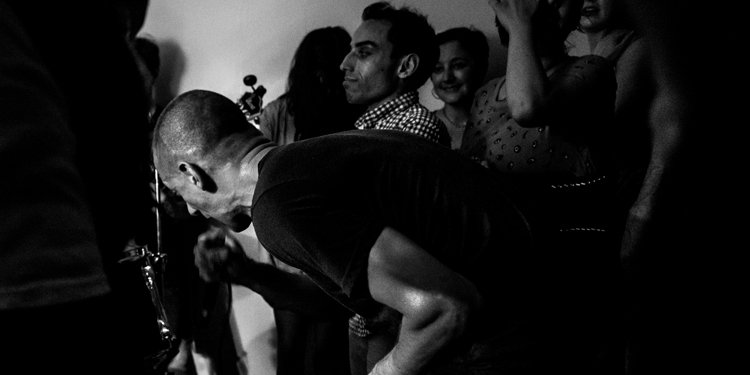 Across from the Waldorf Astoria-owned Roosevelt Hotel is the relatively hard to find New Orleans School for Esoteric Arts. A space for learning about astrology, tarot, art and all things obscure, it is also a DIY dream where, whether you intend to or not, you end up standing in the midst of the band.

Nick Zedd’s films illuminated the back wall as Ex Specter, fronted by Kallie Van Tassel of punk trio Gland, played their first full-band show. For years, Van Tassel has recorded solo songs, but with four additional bodies, they were as saturated with sound as they should be. Infused with doses of drone, pop and shoegaze, Ex Specter are strange and enthralling. Carnival-like keys and tuned-down guitars gave way to an eerie, dreamy soundscape that venture into the ethereal. The perfect segue into Miserable, they also open for True Widow later in the year for a show that will undoubtedly darken and slow the night. Kristina Esfandiari’s Miserable songs are, on record, immaculately heartbreaking. With a band behind her, they become something entirely new. Compared to her King Woman project, whose live performances are much more true to the originals, Miserable transformed into a just as incredible, but noticeably different, entity. Devoid of its depressive and soft nature, Miserable was harder, more direct and Esfandiari’s vocals were less vulnerable. “Oven,” from her latest release Uncontrollable, was more alive–the extroverted sister to the album version. If her songs are about someone or something specific, maybe she has moved into a space of contentment and acceptance. Maybe the Louisiana humidity refused to allow for a sonic atmosphere so related to the depths of winter. Whatever the explanation, the shift from stunning morosity to a more sanguine aesthetic was unexpected and wonderful. It was more than a play-through of songs; it was an alternate Miserable universe. The lyrics maintained their honest, diary-like quality, but the band boosted them into an elevated, lighter world. Esfandiari’s music will always evoke hints of sadness, but it is a sadness that you’re grateful, even honored, to feel. Holy mother of Thou. The Baton Rouge sludge/doom metal/whatever you want to call them band played one of their few shows of the year after Miserable, only this was a surprise Nirvana cover set. The Olympia band’s records for sale near the front door suddenly made total sense, since vocalist Bryan Funck is one of the owners of Sisters In Christ record store, along with Ex Specter guitarist Michael Moises. Thou has contributed to all three of Robotic Empire’s Nirvana tribute albums, one of which also featured a cover by Esfandiari’s former band Whirr, so it was only fitting that their 500th show should be a memorable one. Below Ian Tilton’s iconic photo of Kurt Cobain crying, which was overlaid with the words “I died for your sins,” it felt like the songs might as well have been Thou’s; somehow, Nirvana translates smoothly into swamp metal. Through “School” and “Scentless Apprentice,” the band and crowd merged until it was impossible to distinguish who was playing and who was there to watch. The unabating mass of people could have been taken straight out of a photo from 1991. After “Territorial Pissings,” when everyone had ventured into the cooler night, the walls were dripping with sweat. The floor was slick and shining. Someone was wearing a gold Saints helmet. The setlist was written on a whiteboard in the corner. It was perfect. Don’t see a Nirvana tribute act. See Thou play “Aneurysm” instead –you won’t feel cheated by the lacking flannel.