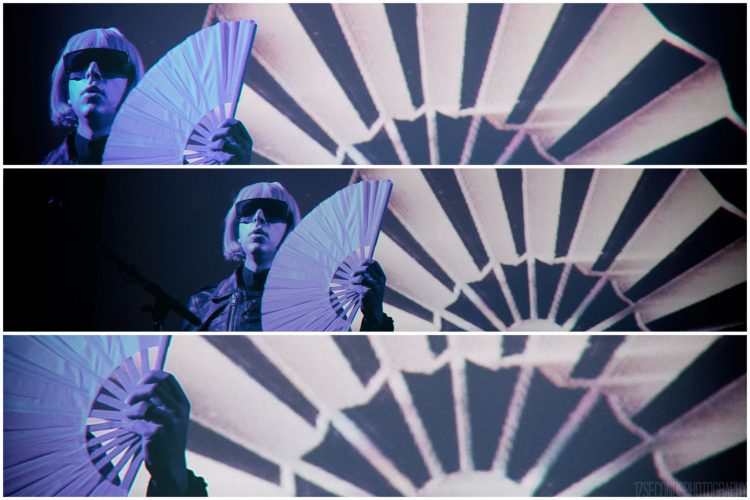 April in Tilburg can be just about anything weather-wise. Last year, we were melting away and purchasing emergency summer clothes downtown cos nothing could’ve prepared us for the heatwave. This year… It was freezing, the wind was merciless, and at one point it even started snowing. Another emergency shopping trip, but alas, there was nothing but summer clothes in the shops. Nobody seemed to be prepared. Anyway, I’m only mentioning this cos I was feeling it hard on Day 2 – the one where I trekked back and forth to the Koepelhal for a total of 8 (eight) times. Skip to the end of the text to read my heart-breaking account of missing Craft show cos I was #toooldtoocold.

Anyhow, the day started with Throane making generous use of the stage at Koepelhal. At times, this stage feels too big for some bands, literally, as in – they just physically disappear in its vastness. But not for Throane. The centrepiece of the stage was an imposing monolithic sculpture in the shape of a knife with a burning torch on top. The band delivered their punishing set encircling and worshipping the ‘idol’ in a minimum light environment. The only other time I felt being so drained out of lifeforce and ready to look for the nearest bridge was after Thou x The Body collaboration at the same spot last year.

Meanwhile on Main Stage, Triptykon was getting ready to deliver the highly anticipated and at last, after 30+ years in waiting, a finished ‘Requiem’. The missing piece, the second part of the ‘Requiem’ was only written last year and was to be performed as a joint effort with the Dutch Metropole Orkest. This was one of the three commissioned works specially composed for Roadburn and everybody wanted to have a piece of it. After not being able to truly enjoy the experience, packed like a sardine in an overcrowded photopit, I tried making my way out and up to the galleries for better views and sound. Only then have I realized how jam-packed the whole place was. Up on the second and third floor, it was impossible to even get in. Disappointing. In total, I managed to hear some 15 minutes of it, most of which were spent trying to get a shot of the musicians, so I really have no idea what to say about it. I would like to rectify that by actually having the chance to listen mindfully to the whole piece once it gets released.

Back to the Koepelhal, one of my personal festival highlights, Soft Kill, was about to disassemble the venue atom by atom, not by one but two full-album sets, namely Heresy and Saviour. Opening with the Grandview, the journey through this hypnotic and moody masterpiece of hollow post-punk was probably some of the best music played at this festival. Sadly, I only got to hear a bit of the second set before another rush in the opposite direction towards Patronaat for a shot of deadly and pain inducing combo of Deafkids & Petbrick.

Already hypersensitized from the last Deafkids show, I had a sort of an idea of how this was gonna go down. Also, I’m happy to report I wasn’t the only masochist in the room, plenty of folks came for more and were bombarded yet again by extreme flashes of light and colour, abstract video projections, all wrapped up in playful exchange between two masterful drummers, even more riffage and experimental noise, culminating in an insanely intense performance. Leaving the venue I’ve come to a realization that the whole experience was a meditation on noise – the music of Deafkids & Petbrick is so immersive that it demands your full attention and as a result, pulverizes your thoughts until nothing but blank vacuum remains and you become light as a feather.

Off to the Main Stage again to catch a sight of Anna von Hausswolff, curator’s own pick. At this point, I felt like a headless chicken, there was too much stuff going on and the desperation to see five minutes here and there was overwhelming. That’s what happens when most of the artists you want to see are playing in different venues at the same time. Agony! I’ve never had the opportunity to catch Anna on any of her tours and that majorly sucked. The feeling was reinforced by watching her last two songs. There she was, her presence like Dirge’s Lenore, cute but really sinister, her crisp clean vocals soared across the venue as she was delivering her lines, in delicate yet tempestuous streak. Even though all of her releases are in a league of their own, each pushing different boundaries of creativity, Dead Magic is a masterpiece existing on a whole another level. Anna von Hausswolff is truly one of the most relevant contemporary musicians of today.

I don’t know if the fuming amps of 10 years ago have gotten Seven That Spells banished from Roadburn, but a decade is quite a long time for atonement and they finally got their chance for a massive do-over. Basically, half the day was reserved just for them in the Green Room where they delivered their magnum opus The Death and Resurrection of Krautrock in a three-part instalment. I was honestly intent on seeing it all, but due to schedule and running order conflicts, I’ve come just in time for the last minutes of Omega. Niko was bending backwards delivering his solos and offering his guitar to the gods. The audience seemed to be awash with blissful exhilaration, so I take it the guys have done a tremendous job.

Another trek to the Koepelhal, this time for the artist in residence: Thou. Out of four distinctive sets they were to perform, a collaboration with Emma Ruth Rundle was the one I got to see. It was captivating watching it slowly unravel, the dichotomy between Emma Ruth’s and Brian’s voices, the simultaneous harshness and emotiveness of it all. Throw a cover of The Cranberries Hollywood in the mix and we all got ourselves a rather unexpected treat. Although, at this point, nothing about Thou should be surprising to anyone anymore.

Drab Majesty were soon to follow on the same stage, so I used the opportunity to take a short break exploring the complex connecting Hall of Fame and Koepelhal, quite fittingly named The Pit Stop. It was a welcoming newest addition to the festival meant to ease the flow between the two venues, offering some respite from the busy running orders, a place to grab a bite and chill, have a drink and enjoy the exhibitions. Full Bleed with its many talented artists was back again, side by side to Marissa Nadler and Emma Ruth Rundle who were offering an insight into their own visual art and paintings.

Several years ago, when I first heard Drab Majesty, I thought it was the perfect band to play at Roadburn, and I was just so stoked when they were announced for the 2019 edition. Unless you’ve been living under the rock, you could not have missed hearing, listening or reading about this theatrical futuristic duo and their special brew of tragic wave. After The Demonstration, the Drab Majesty adoration simply exploded and no one seemed to be immune to their dark and mysterious synthpop soundscapes.

They’ve taken to the stage inhabiting their recognizable characters with white painted faces and greeted the crowd with a set of controlled gestures with fans and hands while the intro was playing. Assuming the positions, they launched straight into Dot in the Sky and held everyone spellbound until the last beat. I loved seeing tonnes of people swinging and dancing like at the best dark side of the 80s club party. Deb and Mona left the Earth with a dreamy outro, gracefully and in style, while those of us who just landed back, had a harsh reality to wake up to.

Baby, it was cold outside and the walk back to the Main Stage, yet again, cemented the decision that there was only one way to go from there on – bed. I popped into the venue to catch a glimpse of At The Gates who were just finishing their set. There was not much more to do there but take a deep breath cos I had Craft double circled on my running order as a must see. At that point it was just not humanly possible for me to endure any of it so I had to call it a night.