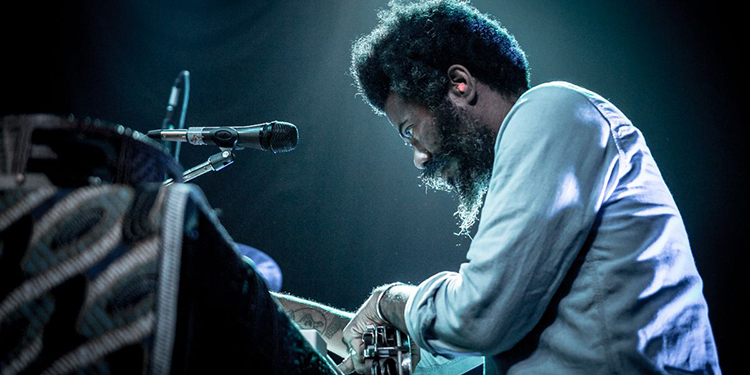 Two band shows have always been kind of odd to me, especially in the absence of an art show. That said, it’s pretty difficult to argue with OM – even if it might not necessarily make sense at first.

I went in not having a clue of what to expect of Daniel Higgs. All I knew was that he is the frontman of Lungfish, a band I can’t profess to be entirely familiar with. His performance consisted largely of spoken word with a few banjo interludes here and there. This isn’t to say that it wasn’t captivating. On the contrary, this was all about the delivery. A constant buildup until the man was bellowing at the crowd like a man possessed. While I think it’d be fair to say that he may have slightly overstayed his welcome in the eyes of the crowd as much of it had lost interest towards the end of his set, I found it jarring enough to keep me engaged. Additionally, being the only one in the photo pit for the beginning of the set made me feel like I was having a personal exorcism. I mean that in a good way. Thwarted in my previous attempts to see them, this was my first time seeing OM. It’s quite satisfying to see a band sell out a successively larger venue with each visit to a city. Not being the best versed in their somewhat extensive repertoire, all I could really do was watch and listen and get lost in the infectious psychedelic doom. Judging by the rest of the audience doing the exact same thing; however, I can’t say I was in bad company. I’d recommend seeing these guys live to anyone that has an appreciation for music, regardless of how familiar they are with the band’s material. When I asked others what they thought of the band’s performance, the word “mesmerizing” came up more than once. I like to think of that as a point well made.