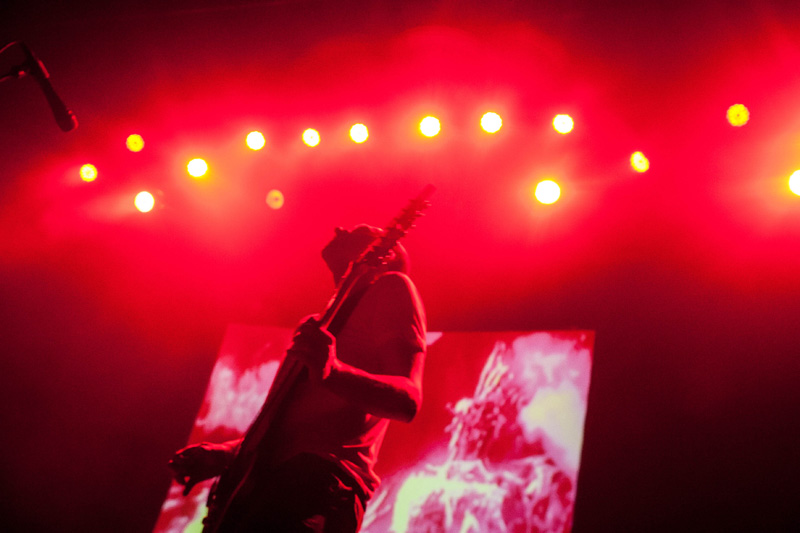 After great difficulty, red tape, bureaucracy and a flubbering, shutty-downy U.S. government managed to keep GODFLESH out of the United States for years, they finally made their return to Los Angeles on Tuesday, the 22nd of April, 2014, at the Henry Fonda theatre.

A fine hum of anticipation buzzed in the large room up, until Broadrick and Green took the stage and warmed us up with some feedbacky toneage for a few minutes, before swinging into the gargantuan “Like Rats”, followed by classics “Christbait Rising” and “Streetcleaner.” The setlist was a whole was a bucket of hits (see below). Large, haunting projections of ancient massacres and religious sodomy provided a mesmerizing backdrop as GODFLESH pounded and pummeled through the evening’s selections. The Fonda rumbled and the people rejoiced. As one looked across the crowd, he could see a moving blanket of communal head-bobbing, all people soaking in every pulse, bathing in the bass, smiling at the riffs.

As for the crowd – pretty good for a Tuesday night in 2014! Considering the general age demographic, one could assume that at least 65 percent of them had to be up early for their professional-careerish type job in the morning – and we all know another Stand Around Sally is born every day – but there was definitely some kerfuffle in the pit area, as well as crowd swimming and I believe even a skirmish or two! Way to go, Los Angeles, give ’em hell! The lads closed with “Crush My Soul,” after which it took about five chant pumps to get them to re-emerge for the encore, “Love Is A Dog From Hell”, and then the night was through. Broadrick did say “see you next year.” Now that’s either a joke about how long it took to get them back to the States, or he’s hinting at the tour cycle for the new album. Either way, it was a precious evening!

Ok everyone, now go home. Get back to work.