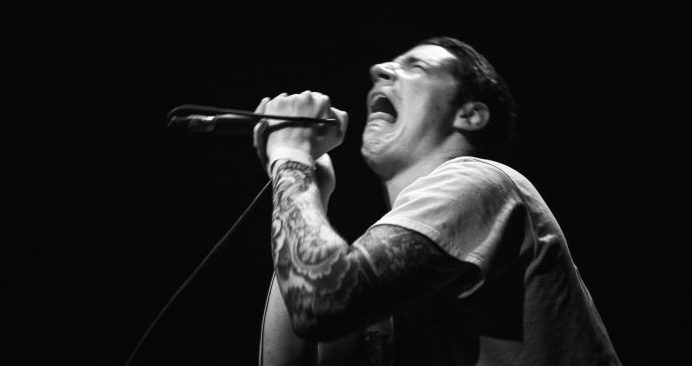 On their own, both Maryland’s Full Of Hell and Rhode Island’s The Body are forces to be reckoned with. The former: a crushing grindcore ensemble whose songs of spastic savagery are brutal and relentless.  The latter: a duo whose primary focus seems to be melting the internal organs of unsuspecting metal fans with crushing noise and sludgy avant-garde doom turned up to 11.   The fact that these two bands collaborated on a full-length album (One Day You Will Ache Like I Ache) and now are traveling the US together performing the album in its entirety is almost too much to take.  Standing in front of this six-man crew armed with all the volume they could muster was actually almost too much to take.  But it was glorious. The album itself is a brilliant collaborative effort, seamlessly melding both bands’ styles and approaches in a cacophonous, sometimes eerie and haunting, procession of conceptual pieces.  Live, each one of these songs seemed to lose the nuance, replaced by straight up fucking volume. Pummeling volume.  Beautiful volume.  It was a pleasure to watch these bands step outside the typical bounds of heavy music and put together a show of true collaboration. Since all they had were the songs from their one release, the show seemed to last much shorter than we wanted it to.  It was over too soon.  But maybe our ears are grateful to have been spared any more punishment, even though our brains wanted more. In this article:bobby cochran, Full Of Hell, One Day You Will Ache Like I Ache, the body