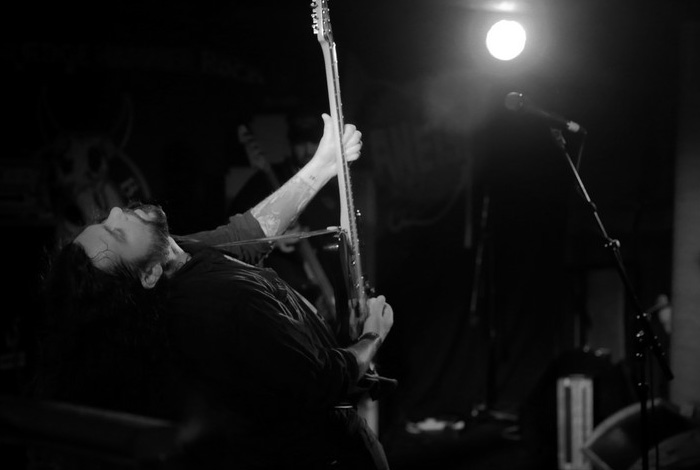 Fleshpress are dark, complex and atmospheric. With fingers in many musical pies, their sound touches on doom, psych, black metal and even a touch of hardcore (think more angular noise core). Conan are like cream, they have risen to the top. The bellowing low end has gained momentum over the years and they prove why they are beloved by so many worshipers of low end riffery. It’s another top notch performance to a decent crowd in the Ballroom. Slomatics bring the slow pounding sludge with all the low end. But unlike most sludge bands, the vocals are from the drummer and are clean and melodic. Also worth noting is that apparently not having a bass player doesn’t make you any less heavy when you have two guitar players tuned down low. Their set is solid and even a few technical difficulties can’t hinder them. There is a special guest appearance from Jon from Conan for their last song. Pelican have been around for 16 years. What I would consider a pioneering cult instrumental band in the metal scene. Their use of entwined guitars play off each other. That was true in earlier works; newer tracks are a little more straightforward and maybe don’t capture the same magic. That is not to say that I dislike the newer tracks, but I’ve found them to grow on me with time. Russian Circles. It’s a perfect follow up to Pelican, thoughtful instrumental post rock. They have a tight and professional performance and the ability to entice with hooks and soothe in quick succession. Not dissimilar to the great Mogwai, they evoke visions that take the away from the chaos that is Camden. Unearthly Trance. The dirt got dirtier. More than low end, Unearthy Trance are a band that I’ve failed to see live over the years. Thanks to Human Disease promo and When Planets Collide for fixing this heinous error. They are everything I could hope for.