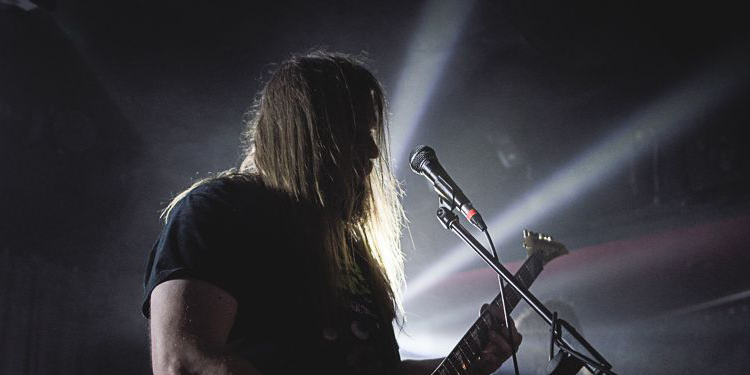 Demilich with Hooded Menace, Vastum, and Temple of Abandonment – October 23rd, The Red Room, Vancouver BC

I’ve always been a fan of shows that bring a little unexpected to the table, and this night was a pretty good example of that. I think it had been over a year since I last attended a show at this venue, since most promoters booking aggressive music tend to not have their shows here. That said, it’s a beautiful, spacious room with a decent stage, even if the stage lights lend themselves more to something for the club kids than a death metal show.

Kicking the night off was Vancouver’s own Temple of Abandonment, who don’t play shows that frequently. Running a little late, I was very happy to catch the last half of their set. I’d describe them as funeral doom done right, with just enough over-indulgence of the aesthetic qualities of skulls and candles on stage and a noose hanging from a mic stand to set the mood, but not enough to mkae it gimmicky. Like I said, they don’t play that often, so if you get the chance to catch them, do it!

My favourite surprise of the night was the next act, Vastum. Hailing from San Francisco, what they brought to the table is being the band that hands down had the most fun. It’s always impressive when a band – playing music within this genre of metal, no less – can instantly put a masssive shit-eating grin on your face. Big ups for the vocalist’s interactions with the crowd, that’s always nice to see. I don’t think anyone in the room had a single negative thing to say about this band.

Up next was Finland’s finest, HOODED MENACE. Words will not suffice to describe them, so I won’t even bother. So much shred, So much awesome.

Finally, Demilich graced Vancouver for the first time. A friend of mine left the show because she didn’t care for the singer’s voice, that she had likened to “robot frog.” I found this terribly amusing. Robot Frog sounded amazing. The best thing about the shitty climate of the music business in this day and age is that you get to see musicians that once threw in the towel give it another go. Didn’t expect that to happen. ALL HAIL ROBOT FROG. Sometimes, legends in the realm of heavy music become tangible, and this was one of those moments.

I left the show feeling a bit better about the universe than I had when I got there.