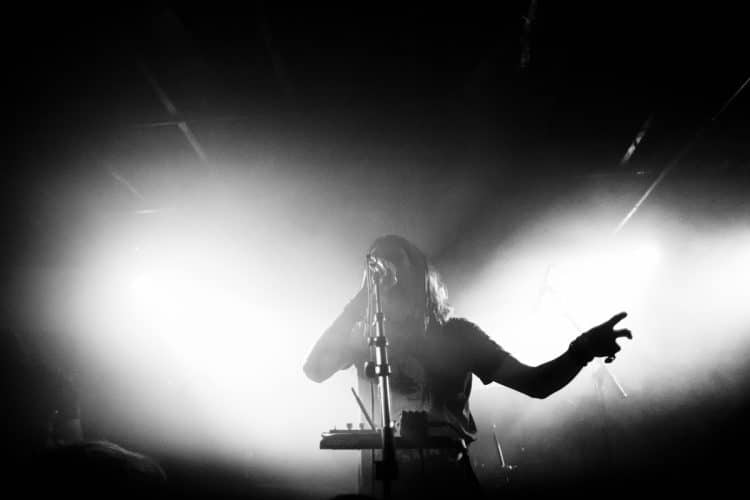 Text and Photos from Charles Nickles aka @kidswinging

I don’t know why breakfast tacos aren’t an everywhere, all the time thing.

Hearty and not, you know, the MOST unhealthy thing you could shove down your gullet before the first sweating day of the coming maelstrom.

Some of them even have greens.

Not migas, though, unless you count the avocado which, if I’m gonna speak truth to my asshole, I really can’t. Migas are eggs, onions, chips, cheese and poblano chilis with that slice of good fat on top plus, maybe, a little verde all sidled into a flour tortilla (sorry, pops, I’m a gringo at heart) to make a gracious fist of sustainable righteousness you can grab for a couple of bucks and nosh happily on your way to war.

The day is no place for the squeals and grools of DC’s foremost non-Pol death merchants but here we are so fuck the world.

I feel like that’s a fine testament to Genocide Pact’s ATF legacy but I’d hate to give these fine, hateful folks short shrift because I’m already brittle and sick on account of being out in the sun so long so let me assure you these sons of ugly make a fine fucking gnarl that’s equal parts iron fist and smirking absurdist.

They’re totally thrashtastic and in a more forgiving environment would’ve spurred a pretty righteous circle pit but in heat like this a body is more inclined to crumple in the shade of port-a-john than display any joyful violence.

Who else would feature a solemn guitar virtuoso who is odd parts Keiji Haino, Steve Vai and Chuck Schuldiner, a rhythm section that plays migraine time like they’re being skinned alive and, at their forefront, a terrestrial Thor (think Adventures in Babysitting but hairy, rabid and cruel) who can shriek and growl and ride hell hard as a Chthonic apprentice looking to unseat and consume Amphiaraus.

I mean, shit, they’re so out of hand I have to dip into the arrogance of my freshman reading just to feel like I’m on the same planet as these would be, could be, should be high art/low rent death jazz Tzadik prodigies.

“You know what’s a great metal band name?” Kwame opined the other day. “Goatwhore. Like you just know exactly what that band’s gonna sound like.”

And not to be all reductivist or anything because I know Goatwhore has been defining and refining a swamp-footed approach to the thrash and burn, blackened death RAWK racket for over twenty years (and that’s not even accounting for their pedigree) and, in so doing, have developed a furious and surprisingly diverse base of hair-whipping devotees (many of whom have travelled hundreds of miles to be here today) but they just look and sound like metal to me.

All of the above went down at the Barracuda. The rest of the day’s sets take place across the street at the Empire Control Room and Garage. Nothing really happens between Goatwhore and Taverner. I have a beer. I make some new friends over t-shirts. I find AC and weep quietly in a doorway for five minutes.

“We’re Taverner from down the street,” the singer notes before the band launches into a sludgy death crusted torrent about…death, I suppose.

I don’t know for sure and I don’t really care for that matter because if you put your ear too close to the ground when the horses are running you’re bound to get killed.

So let’s just catch our breath for a second and surmise that Taverner are a fine piece of toothy working-man’s grind with all the crash and bash screeching bellows that inspire the yen for self-defenestration one gets when shit goes so plainly, daily awry.

This shit is loud.

Like SO fucking loud that as I’m standing in front of the frontman’s double sets of double bass cabs trying to get a sense of what is between his low-end thunder and screams, the noise monger fucking up a reel-to-reel while swapping live wires like cheap kisses and a drummer pummeling the callow, sexless skin like Todd Trainer huffing pigs all I can feel is the wind and I fucking love it thought I do worry that, as the band progresses through their ungodly sludge massive, I might have to skip the brown note entirely to find a safe space to spit up my teeth.

The last time I saw Full of Hell I stood next to a kid who stank of cat piss and he all but tore his face off with elation when the band kicked into their tongue-torn noise grind but, three screeds later, was being ushered away by security because he passed out while punching the PA and I suppose nothing so much has changed for the band between then and now except the stage is bigger, the audience cleaner (or decidedly less conspicuously amphetamined) and a whole lot fuller for the torrent.

So, plenty, I suppose.

I mean, they’ve got Lingua Ignota, Mark McCoy and The Body enhancing their batshit aesthetics on record but live they come flailing with the same red-faced tornado of postmodern fury as when they first left me clutching my pearls in reverent horror.

Unearthly Trance are total black-blood crushers who ply a decidedly witchy blend of outcast New York doom and they just make soooo much more sense in the smoky swell of this darkened room than they did when I saw them, recently, play in the shade of a perfect Brooklyn brunchday.

I mean, they were good then, but just too much, too soon.

Tonight, though, they’re damn near perfect. Heady, heavy and just spaced-out enough to give everyone a chance to close their eyes, bang their heads and catch their breath before the last leg of the day’s suffocation.

You know, I never really got with Integrity.

I remember reading about them in Terrorizer a million years ago and felt pretty stoked on their whole “there’s a place for the devil in punk” shtick but when I listened to them I felt like I was being hit in the face with a brick and not in a good way.

They were just so pissed, so ugly, so relentlessly mean-spirited that I couldn’t stick around long enough to understand the nuances of what they were doing or what a profound impact their crazed dirges would have on the music landscape.

Though, to be fair, I’m not so much a fan of the bands they’ve so clearly influenced.

Still and all, I am excited and totally fucking terrified to see them.

I heard their set (which I missed) at Decibel Beer Fest was a fuckin’ riot and as soon as the band jumps into their bloodshot hardcore hate stomp I am reasonably confident that Dwid Hellion might actually hit me in the face with a brick.

In fact, for all the hulking violence the band summons in their sonic deluge, there is surprisingly little blood to be seen.

And that really is surprising because among the heaviest of heavies today Integrity play the most purposefully debased. I mean, it’s just so fucking much, man. Chugging, screeching, barking, beating like My War for juice freaks with the virtuosity shit-canned for the cruel power of the Left Hand Path and if EVER there were a set that might inspire a broken neck it’s this.

I think I get it.

It only took, like, seven years of relentless frustration and ear-splitting trials and I’m still not fully sure I’m sold on the band as an every or anyday indulgence but I think I finally, fully understand what it is that people LIKE about Primitive Man.

The painful, plaintive reaction to the immediate and unremitting madness that has turned our time into some grotesque potpourri of Robocop, Infinite Jest and Idiocracy with a little bit of Birth of a Nation thrown in because everything is just the fucking worst.

And, in the past, there’s always been something about their gut-wrenching bombast that proved too much for my senses to bear but tonight they feel like succor.

Maybe it’s all the lonely time I’ve recently spent mining free jazz and atonal dirges to help cope with what I’m beginning to understand is a really rather  profound loss which is forcing me to open up to pain in a whole new way and Primitive Man’s singular brand of scorching nihilistic horror perfectly echoes the endless internal scream I’ve been trying to stifle since January.

The fuck do you want from me?

And Pig Destroyer just do.

And what they do is play a brand of such high-minded murder music they’ve all but secured their permanent position as the grande dames of grindcore.

So fast, so loud, so fucked and fucking perfect in the presentation of their noble savagery it actually kind of sets my mind at ease like Ritalin or ECT or a game of chicken with a turbine engine.

All the cool kids have always loved a killer with a bit so why wouldn’t a band of Tokyo miscreants build a whole riff-ripping career paying too-high homage to the greatest of the modern human grotesquerie.

What’s curious about CoM’s decidedly sinister bent is that the music is actually kinda groovy: an ass-whompin’ death stomp shored up my theremin wails, amoral confessions, blues shred and a consummate wail.

It’s a good time for bad guys, a disturbing echo of our end times and total blind-eye wrecking ball party for the lucky fuckless cramped into this cavern way too late to meet tomorrow alive.