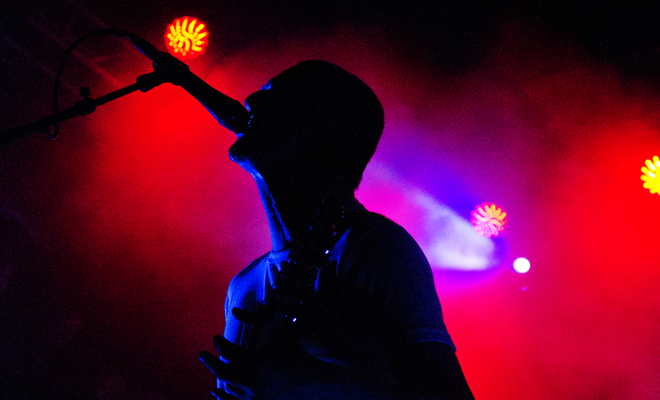 Six months after being denied visas to tour the US (read the full story in our interview here), Justin Broadrick and Ben Green finally made it overseas to come and pillage some American cities with a reunited and healthier than ever Godflesh. They have finally crossed the ocean with what turned out to be a fucking humongous barrage of sonic destruction waiting for nothing but to be unleashed on unsuspecting American flesh. As expected, the band – which is now something legendary – attracted a huge crowd, with San Francisco’s DNA Lounge not entirely sold out, but pretty damn packed with a surprisingly diverse crowd, which attracted punks, goths, metal heads and experimental/industrial freaks alike.

The night was kicked off by the ethereal but threatening dark ambient textures of House of Low Culture, a long running experimental project spearheaded by Aaron Turner (Isis, Old Man Gloom etc) and which now also includes his wife Faith Colaccia (also of Mamiffer). Aided only by guitars and an enormous arsenal of pedals, the two erected a thirty minute long wall of demonic static that made the crowd plunge into a state of surreal trance. The sounds summoned but the duo are like a thick and enveloping autumn fog. A cold and dense cloud of vibrating and shimmering chaos slithered through the crowd like some kind of hallucinogenic flood, stacking layer upon layer of crepuscular ambient textures, one on top of the other, in an escalating overboiling of heathen cacophony. Their set was dark, introverted, tremendously abstract and extremely heartfelt, with Turner even surprisingly head banging at times as he floated in the mist of excruciating and howling cacophony spilling out of his amp. Their set stands somewhere between Tim Hecker, Black Boned Angel and Sunn O))), with the duo’s music effortlessly swinging between soothing meadows of placid minimalism and frightening blasts of teethed and snarling industrial noise. Second up was a man and his new project that need no introduction. William Bennet and his main band Whitehouse are something so big and legendary that if you don’t know them you should probably check your surroundings to make sure you’re not living on fucking Mars or something. But what Bennet bought to the table this time around is a fairly new solo endeavor called Cut Hands, a project deeply rooted in the underground club scene and which has at its core a more dance-oriented focus. Still punishing, unrelenting, at times freaky and even even downright trance-like, Cut Hands’ music is still something that makes it incredibly hard and cumbersome to not shake your ass in a hysterical tantrum. The beats were monstrous, hammering and repetitive, deeply rooted in tech-house and glitch music, but with a very jungle/exotic feel to it. It is essentially music based upon a an enormous arsenal of bell sounds that shimmer and shake in a toxic trance, thrusted forward by propulsive, repetitive and extremely driving beats. It’s basically club music, but of the darkest craft, not something you would want to dance to to make a move on your crush, but something you want to dance to to completely lose your shit and get taken away by a freaky, darkened, hysterical and hypnotic state of complete intoxication. Bennet is no newcomer, he knows how to pummel an audience’s flesh, and even if more rooted in dance music, that is exactly what Cut Hands did, as always also further enhanced with the aid of hypnotic and flashing video projection that plunged the crowd even further into a cyberpunk and post-industrial state of total euphoria, as if all of a sudden everyone was thrown into the movie Strange Days. Terrific.

What is immediately clear from the current performances of Godflesh are two things mainly: first of all, that this band knows it is revolutionary, twenty years ahead and that the world still hasn’t caught up with it regardless of their decade long hiatus, and second, that Justin Broadrick is a real control freak. Someone with his shit so together and dialed in that you can sense his tension and awareness about the form of his creature from within the crowd. The guy spent the first two songs in the set giving cues to the sound guys from stage while performing and messing around with his amp, turning his shoulders to the crowd and tweaking his amp knobs every five minutes to be absolutely sure the sound of his guitar was causing the highest degree of physical pain possible in the audience. This might have a bit tainted the purely scenic presence of the band, but by the time the third song was rolling out, the band’s sound was so dialed in, loaded and cruising that it felt simply monstrous, as it ripped heads off in the audience like some kind of bloodthirsty beast. Godflesh is a beast. A fucking feral animal of a band. It’s all gut, pumping blood, adrenaline and fangs, claws and pure instinct. The band’s sound is like concrete, it’s made out of cement pillars that collapse endlessly, and an endless bashing of metallic dissonance. Their music literally pulverizes bones as it plows over your fucking head under an unrelenting storm of hailing and howling beats.

When the band kicked off their set with the iconic “Like Rats” it felt like a diesel engine of a tank had ignited in the venue and its treads were in motion, and that the damn band was gonna plow through everything, stopping for nothing. Performance-wise, Broadrick and Green show a professionalism that is almost annoying it is so meticulous, and it’s not easy to relate to. There is no metal or punk bullshit antics in this band. It feels like there are two engineers or scientists of the craft at work on stage, not metal musicians. Their interaction with each other is continuous, to ensure the music is leveling everything and causing enormous havoc, and the messing around, talking to the crowd and general bullshit antics are kept to a bare minimum. The two are just bent over their instruments like blacksmiths of the apocalypse, hammering away at godly and otherworldly steel that glows with the death-bringing heat of a nuclear meltdown. Boadrick’s tone and riffs are fucking godly. Enourmous slabs of buzzing dissonance that cut through the air like mammoth razor blades, slashing all meat and flesh in the room like butter. Ben Green’s pulsing and burning baselines force you to your knees they are so driving and punishing, and there is no doubt in the whole world that this band is, at this point, completely inseparable from drum machines. Godlflesh will probably never again experiment with human drummers, and that is obvious at this point. Simply because, to all effects, this is not human music. This is completely antihuman, it’s the demise of man and some kind of rise of machinery that has figured out a way to waste humans and end their filthy existence for good.

Check out the setlist below, highlights being “Pure”, “Spite”, “Crush My Soul”, the ultra rare cut “Love Is a Dog from Hell” played at the end as an encore, and a fucking colossal “Christbait Rising” that made this Easter Sunday day all that much better. All hail Godflesh, after whitening their superhuman power once again we bow down and salute this monster band that has been changing the way heavy music is made since they day they were born a quarter of a century ago. Encore:
Love Is a Dog from Hell