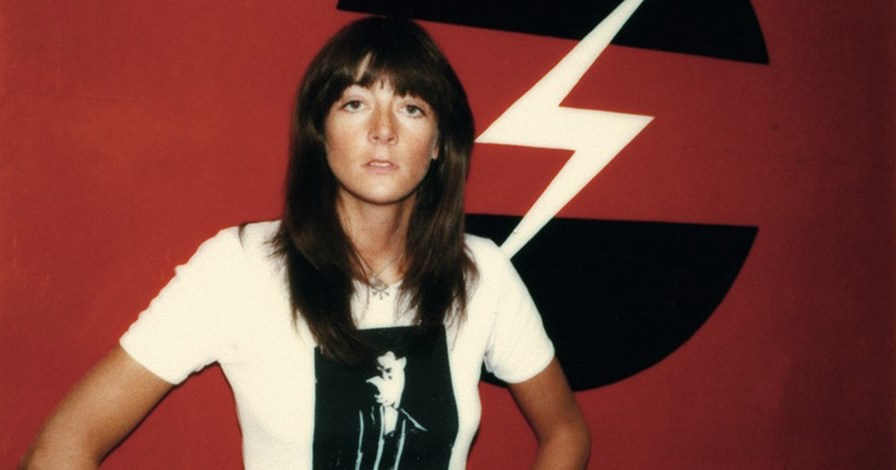 “I have been a rude little girl, haven’t I?” Cosey Fanni Tutti muses. “I’ve always been into my body and what pleasures it could give me.”

On the evening of March 15, 1974, the controversial performance artist and musician born Christine Newby climbed into a swing on the stage of the Oval House Theatre, London. Wearing a miniskirt that flashed glimpses of her underwear with every surge through the air, she swung higher and higher over the heads of the assembled crowd. As they looked up, Tutti began to piss through a heart-shaped hole cut into the seat, warm micturition raining down over unsuspecting heads. Later that evening, she would perform the role of a photographer’s model, topless in a metal cage, and simulate sex with her then-partner, Genesis P-Orridge, at it doggy style with grossly inflated genitals daubed in fluorescent paint. The show was called COUMing Of Age, and it marked the first occasion that her art collective, COUM Transmissions, had used nudity and sex as part of their practice, inspired by Tutti’s work as a pornographic model. “It was about sex and that didn’t come from nowhere,” Tutti says of COUMing of Age now. “There was always a thread of sex magic going through (our work), but this was just blatant, full-on.”

There are few artists who have embraced the expressive potential of the human form as radically as Cosey Fanni Tutti. Revelling in the possibilities of her body as displayed in the pages of porn magazines or onstage with COUM, then later as a vehicle for the creation of extreme music that influenced musical movements from industrial to noise and techno, she remains one of the most revolutionary artists to emerge from the British counterculture of the 1970s. Although Tutti writes in her new autobiography, Art Sex Music – out now via Faber & Faber – that “I didn’t want another set of rules imposed on me by having to be ‘a feminist’,” her fearless experiments with the female form remain a true inspiration for anyone who defies convention in what they create.

Dressed in jet black and sat in the offices of her publisher, Tutti reveals that the process of writing Art Sex Music’s 500+ pages of unflinching memoir has been a curious experience, delving into her past and finding new resonance with her present. Her memories have been augmented by research into her diaries, which she kept since she was a teenager scribbling in notebooks. “I look at everything – the music, the sex work I did, the art – and realise that my life is all those things and they are all art,” she says. “When I was writing the book I thought, ‘Should I be writing about something else?’ I was working through my diaries and I started thinking, ‘A lot of people write autobiographies, what do they write about?’ Because this is my life and it’s non-stop. That’s just it, art is my life.”

Tutti says all of this without pretension. In person, her working-class attitude, shaped by a childhood wrangling with an authoritarian fireman father on a Hull council estate, hasn’t lost any of its bite. She can deploy stern glares that might cut steel, yet is warm, welcoming and brimming with wit. It’s this strong and unapologetic voice that runs through the pages of Art Sex Music, an account that is at times brutal in its recollection of what it was like to defy all expectations of class and gender.

“She has the most amazing bullshit detector I’ve ever seen in action – better than anyone I know and 100 per cent reliable,” says Chris Carter, Tutti’s partner and, along with Genesis P-Orridge and the late Peter ‘Sleazy’ Christopherson, a fellow founding member of Throbbing Gristle. “I most admire her intelligence and determination, a combination of female insight and northern grit… Apart from being a fantastic artist, singer, multi- instrumentalist and an incredible dancer.”

Tutti’s focus on her work and no-bullshit approach stems from her formative years in COUM. “I’ve never felt the need to proclaim, ‘This was mine, this was my idea,’ because it was a collective,” she says. “You’d go into it with the idea that what you were doing was for everyone, to make the whole thing work.”

In COUM, as with Tutti’s entire life, everything was done as part of a performance. There was no demarcation between art actions and posting a letter – “your lifestyle was a COUM-action, even your actions around the house”, explains Tutti. All was valid, everything was art.

In their early years, COUM Transmissions produced art that was playful as much as it was provocative. This was communally created art delivered for the benefit of the community – or, in Tutti’s words, “creating joyful moments for people in the streets”. Much of the physical action of the performances, taking place across Hull, was instigated by Tutti, who sewed surreal and fantastical outfits for them to wear. “It was (about) simplifying it and not making it ultra-highbrow and unreachable,” she says. “Everything is within people’s reach and they can access it readily. There’s not a magic bullet to art, it’s for everybody.”

Selected images from Tutti’s porn shoots were eventually blown up and exhibited at the COUM retrospective Prostitution, held at the ICA in October 1976. Intended as the endpoint to COUM and the birth of Throbbing Gristle, Prostitution was condemned in a storm of tabloid outrage. Tutti’s photographs were removed from the main gallery and hidden in a back room, available only to ICA members. “The fact I couldn’t hang them up on the wall pissed me off, because all of a sudden the main items of the exhibition weren’t there,” she says. “It had a big impact on the exhibition and how I envisioned it. But then it became something else completely – which is very COUM. You run with it and think, ‘Hmm, that’s all right then.’” The show even prompted a debate in parliament about arts funding, which saw the group branded “wreckers of civilisation” by Conservative MP Nicholas Fairbairn (who was later linked to a child abuse scandal).

The vicious criticism came not only from the political and art establishments and press, but from feminist circles. A journalist sent to interview Tutti by radical magazine Spare Rib rang her up a few days later to say that the editors had demanded she change the tone to be an attack on her work. “I thought, ‘What the fuck? You’re supposed to support women, not hold them to an agenda,’” Tutti remembers. “That’s everything that we’re trying to fight against, isn’t it?”

These days, however, she’s held up as an inspiration by writers like I Love Dick author Chris Kraus and pioneering musicians including Factory Floor and John Grant. (Kraus contributed a piece to Maria Fusco’s Cosey Complex, a collection of essays exploring the idea of Tutti as methodology, rethinking her from noun to verb.) Significantly, she’s also cited as a role model by prominent figures in the sex industry, especially those who’ve been able to subvert its power structures, creating space for it in the art world – such as porn actress and musician Sasha Grey, who collaborated with Tutti on Nico covers album Desertshore/The Final Report in 2012. “Her art and music has made an imprint unto several generations of curious minds,” Grey enthuses. “She is the personification of self-empowerment.”

To Read the rest of this spot on feature head over to Dazed Digital!

In this article:cosey fanni tutti, Featured