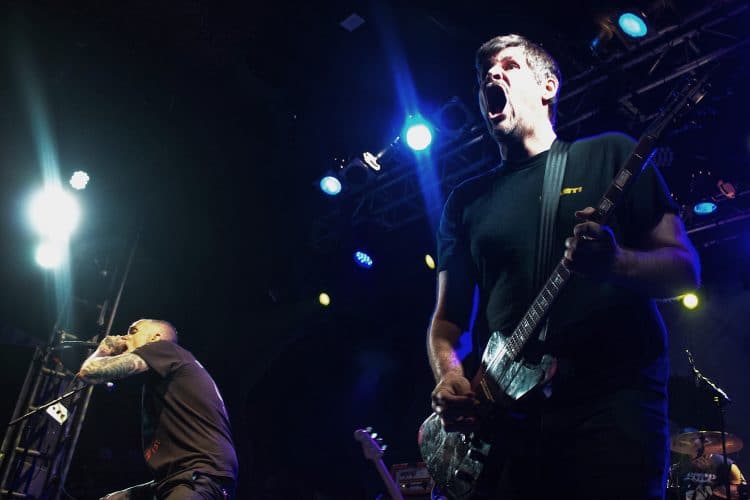 Photos by Tim Birkbeck from the tour’s London show

A night of pure extreme music is all you need. And with a line-up that includes the likes of sludge/hardcore fiends Fange, straightedge crust arsonists Sect, old-school hardcore punk legends Terror and of course the mighty Converge, one cannot go wrong.

The stage is set and Fange make an appearance. Comprised of guitars, bass, drums and vocals, the quartet comes on stage with a surprising amount of feedback and weight to them. Understandably it takes a few minutes for the sound to settle, but Fange do not lose track of their overwhelming vision and deliver a horrifying performance. The band released in March 2019 its sophomore record, Punir, following the recipe they first laid out on debut album Purge. Stripping away some of their experimental edge and focusing more on the intersection between hardcore and sludge has done the band a great service, and it is a manifestation that works very well live. Vocalist Matthias Jungbluth was captivating, unleashing a terrifying performance as he drunkenly traverses the stage, stumbling in his path and unleashing his trademark deep, harrowing vocals. The guitar and bass at the same time are on full force, invoking the dark, fuzzy sound of Punir and making the entire venue crumble with every note played and every string strum. A terrific half hour long performance that brings to life all the nightmarish concepts that Fange have been filling their records with.

And from the heavy, slow pace of Fange the sonic trajectory takes an abrupt turn when Sect come to stage and with a line-up conceived of only in the purest of hardcore dreams. Cursed vocalist Chris Colohan is joined by Catharsis guitar James Chung alongside two Earth Crisis members Scott Crouse and Ian Edwards, with drummer Andy Hurley of Fall Out Boy (strange alliances right?) rounding up the line-up. Sect has a brilliant discography featuring two short but very potent records, and they showcased the best of these during their energetic appearance. From the moment they appeared on stage it felt like they set something ablaze, unleashing their rapid and formidable crust structures in ferocious fashion. The bass of Edwards lays down the heavy brick work, with Hurley’s impeccable timing being always spot on. The riffs of Chung and Crouse carry all the animosity displayed in the band’s self-titled record and No Cure for Death sophomore, while Colohan unleashes true vitriol through every phrase. The brutal performance goes through the highlights of No Cure for Death, with “Open Grave”, “Liberal Arts” and “Crocodile Prayers” radiating with a piercing, unyielding attitude. Throughout the set Colohan keeps addressing issues, detailing everything from political decadence, social liberty and the even more harrowing notion of losing someone to addiction. Closing the set with the heavy and relentless “Sinking” is as good an end as one could hope.

Now, we are once again in the presence of legends as the mighty Terror come to the stage. Terror in a sense are the odd one out in this exquisite line-up, being much closer to the lineage set out by the hardcore punk pioneers of the late ‘80s and early ‘90s. Through the years they have proved that they are heirs to the sound of Agnostic Front, Madball and Sick of It All, by way of certain metallic augmentations. Nevertheless, even if they are not one of the most adventurous and experimental bands out there, they are probably the best at what they do. The set starts in the strongest possible fashion with the band travelling back to their very early days and unleashing the ecstatic “Lowest of the Low”, as circle pits begin to form in the crowd. Vocalist Scott Vogel keeps throwing fuel to the fire, urging the crowd to “have some fucking fun”. And there is not a better call for that when the set focuses on the band’s stellar sophomore record One WIth the Underdogs. The title track shines brilliantly with its fast and unforgiving pace, while “Spit My Rage” still echoes as potent and menacing as when it first saw the light of day, and of course “Keep Your Mouth Shut” is just out of this world. And obviously do not even get me started on “Overcome”, that is a track that simply needs to be experienced in a live setting. Tying this perfectly with another epic in “Always the Hard Way”, again displaying all the power and weight of their fundamental hardcore approach. The set here also closes in magnificent fashion with “Keepers of the Faith” and its sharp riffs, acting as a burning reminder of Terror’s worldview.

And finally it is time for the headliners. Converge released their latest record, The Dusk In Us, in 2017 and this tour is not so much in support of this work, as it is a retrospective on the entire career of this extraordinary act. And with a band with such a rich and impressive discography this is undeniably a wonderful trip. Still, the opening track comes from The Dusk In Us, and it is probably the best way to open a show, with the dizzying melodies and unearthly breakdown of “A Single Tear”. It is just an unreal moment, as the heavy chorus comes with the voices of Newton and Bannon combing to terrifying result. And what follows is an overture through some of the most striking opening tracks Converge have composed through the years, with “Dark Horse” from Axe to Fall arriving through the blistering drumming of Koller and “Aimless Arrow” from All We Love We Leave Behind featuring Ballou’s trademark lead work, always caught in some strange place between melody and dissonance. And that is when Converge unveil their time machine for the first time, visiting the raw, primal essence of Petitioning the Empty Sky with the monstrous “Forsaken”. It is so exceptional to witness the organic evolution of Converge through the years, all condensed in hour. Sprinkling about a few of the newer tracks , they actually go back to some fairly obscure “Locust Reign” and its visceral attitude from their split with Agoraphobic Nosebleed. The lion’s share of the set still goes to All We Love We Leave Behind, with the title track in particular stealing the show, yet it is the more obscure moments that once again sprout forth and remind everyone the richness of Converge’s discography. The revisiting of You Fail Me is such a highlight with “Black Cloud” and “Eagles Become Vultures” unleashing all of Converge’s erratic energy and propelling the set forward. The performance appears to come to an abrupt end after the majestic performance of “I Can Tell You About Pain”, leaving everyone wanting more with the band shortly returning to stage for a demonical performance of probably the band’s most famous track, the mighty “Concubine”. Throughout the set what surprises me is not just the potency of Converge’s tracks, but the energy they radiate when on stage and their impeccable technical aptitude. Throughout the set they do not seem to miss a beat, always sounding tight and present, never becoming sloppy or simply going through the motions. A perfect night overall from a number of acts that you should not miss if you get the opportunity to see them live.