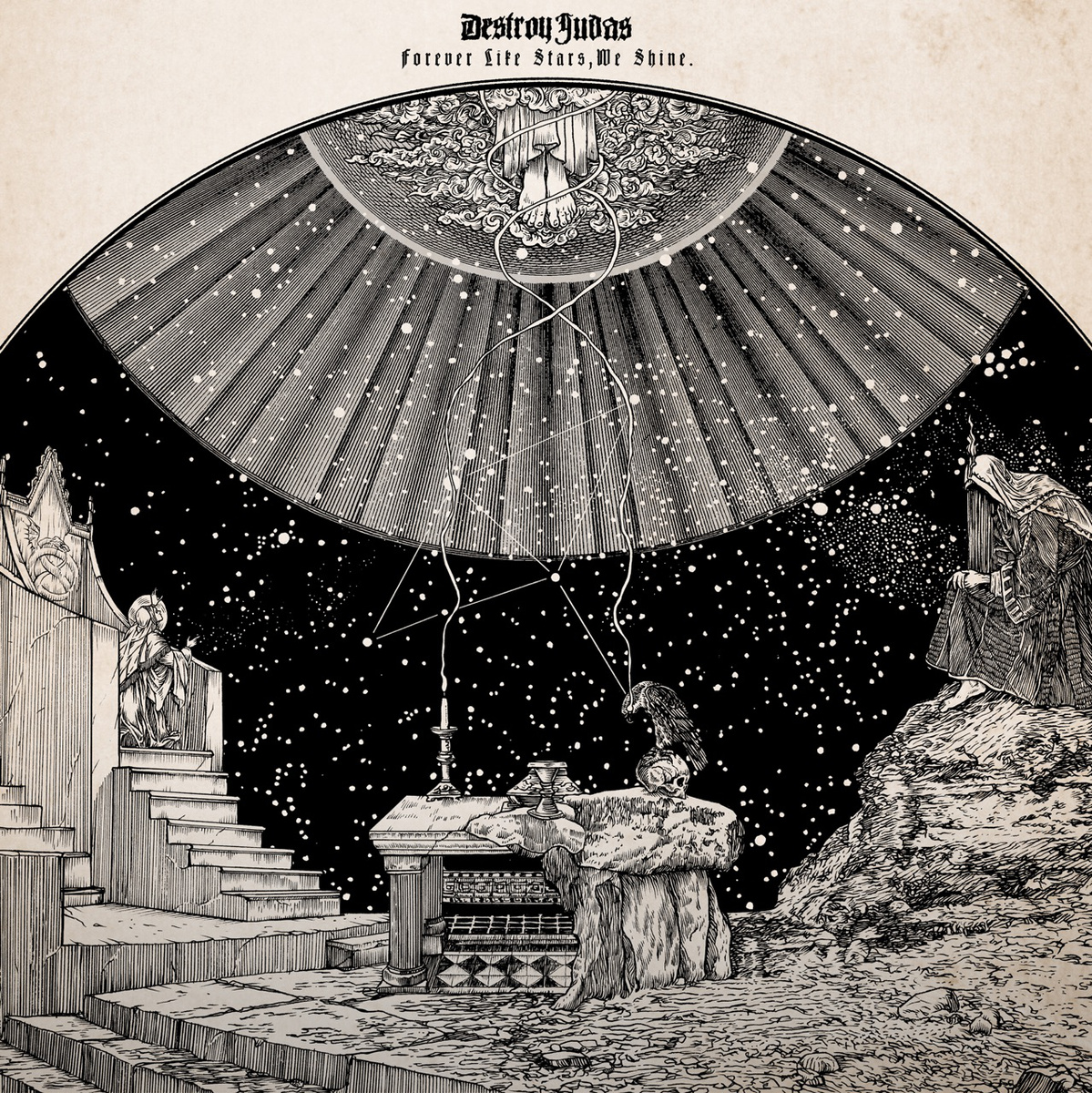 Whenever an emerging doom band comes out with 30-minute single song albums, I run for my pillow and pajamas and take note in my “most pretentious and pompous emerging bands in the world” list. Damn, only people like Corrupted, Moss, Sunn O))) and few others can pull that shit off decently, and even in those cases, the results still remain challenging. So, I approached Long Beach’s Destroy Judas‘ new record with a huge grain of salt as soon as I saw it was a single, half hour-long funeral dirge monolith. I admit I was skeptical and unwilling to have to sit down to listen to a band’s record without having the option to skip ahead. Well, I was fucking wrong. Not only does this sophomore release by the Long Beach doom overlords slay, but it also slays in many different directions, unveiling in front of the listener an opus of unmatchable profoundness and masterful craft, and keeping the listener glued to their seat for the whole duration of its colossal unraveling.

“Forever Like Stars​.​.​.​We Shine” blends doom and post-rock in a seamless flow of emotional tides. The song/album kicks off with a eerie and dream-like post-rock tapestry of clean and reverb-drenched guitars sewn together by soothing bass lines and a very subtle but obvious tribal drum beat that builds, builds, builds, and builds, multiplying itself on its own repetitiveness up until its rupturing climax. Many comparisons come to mind as this long intro gently takes the listener by the hands and guides them thorough a dream-like but tense sonic landscape: Red Sparrowes, Explosions in the Sky, Stars of Lid, Hammock and God Is An Astronaut all come to mind as the band slowly but masterfully assembles a swelling and pulsing progression of masterfully entrancing atmospheres.

Then, when the critical mass has been reached, Destroy Judas unleash on the listener a crushing barrage of distorted guitars that, along with the hypnotic tribal drumming and soaring delay melodies, create an utter hurricane of enveloping and storming heaviness. This is where the band steers its style in a much more “hardcore” and sludge direction, often following in the footsteps of band like Isis, Rosetta, Cult of Luna etc, but developing everything by their own book and letting their own musical personality freely roam and take over everything. At the twenty minute mark, after the band has carefully and meticulously crafted the longest and most darn epic intro in post-metal history, Destroy Judas decide it’s time to get down to business and get their hands dirty. This is where shit changes on a dime and goes from eerie and ethereal post-metal magnificance to a filthy sludge bludgeoning in which punishing and filthy sludge-doom riffs, pounding rhythms and disembodied vocals hurdle against the listener a suffocating barrage of aggression. The band turns from a refined post-metal spectre into a bellowing and blood-thirsty beast in seconds, resembling towards the end something way more visceral and primitive, akin to bands like Rwake, Kylesa, Minsk and Unearthly Trance.

The shifting riffs and rhythms of the second half of the song ensure for an adrenaline-packed climax of the album, but the band does not let go till the very end, making the second half of the track an absolute beating, with a big surprise coming towards the end. Right when it sounds like the earth is about to crack open under the sheer force of their riffs, the band stops and drifts away into a mesmerizing psychedelic dirge, opening up the third and final phase of the album in which you can also hear keyboards and synths before a Neurosis-ish progression guides the listener into the rupturing and soaring progression at the end. In a colossal mix of melody and heaviness, the end of the album sounds like Neurosis’s “Stones from the Sky” on speed as it swells and twists until imploding in the end. Destroy Judas have created something of puzzling greatness with this release. You can tell that the bend spent an enormous amount of time putting this whole damn thing together and that a lot of thought and heart went into every second of it.