V0041459 A Chinese torturer disembowels a decapitated man Credit: Wellcome Library, London. Wellcome Images images@wellcome.ac.uk http://wellcomeimages.org A Chinese prisoner who is bound to a crucifix or stake and beheaded, is disemboweled by a torturer. Gouache 1850 A Chinese methods of torture and punishment Published: - Copyrighted work available under Creative Commons Attribution only licence CC BY 4.0 http://creativecommons.org/licenses/by/4.0/

China is the birthplace of Confucianism, a philosophy which influenced rulers in China for centuries from BCE to the late 13th century, on and off. It emphasized virtue from the top down, encouraging people to treat others as they would be treated, and to uplift their fellow citizens as a path to their own moral and material success. However, at a certain point in Chinese history, Confucianism began to be seen as a scourge of society, with philosophers like Siun-tseu (315-236 BC), Han Fei and Li Si seeing it as a path to immoral behaviour and treason. Instead, they proposed a system called Legalism, whereby even the most minor of infractions would incur a massively disproportionate sentence, usually torture. As Li Si wrote,

Only an intelligent ruler is capable of applying harsh punishments to light offences. If light offences carry heavy punishments, one can imagine what will be done against a serious offence. Thus, the people will not dare to break the laws.

With the rise of Legalism, torture became the modus operandi of the Chinese justice system. Throughout the centuries, the methods of torture were perfected in all their brutal glory – you can read about some of them here – including lingchi or death by 1000 cuts, which actually meant anywhere from 100 to 3,000 depending on the dynasty. By the mid-1850s, the judge would use his discretion in sentencing the number of cuts, ranging from 24 to 120. These were no minor cuts, this was a dismemberment of the prisoner while still alive. According to the British Archdeacon of Hong Kong, John Henry Gray (1823-1890), who wrote China – A History of the Laws, Manners, and Customs of the People (1878), the courts were the site of the torture, and while the “trials” were open to the public, they were so brutal and disgusting that barely anyone showed up to watch. Below are some paintings on rice paper from 1850 that depict various torture methods used by government officials on Chinese citizens. These macabre little paintings show the torture that citizens underwent for centuries – keep that in mind when you’re looking at the cute little beheaded and disemboweled dude!

A Chinese man being restrained by the ears

A hooded Chinese prisoner is strangled by two executioners

A Chinese prisoner is exceuted.

Execution of a Chinese prisoner by beheading

Chinese torturers beating the soles of a prisoner’s feet

Torture of a Chinese prisoner

A Chinese prisoner is interrogated whilst being tortured

A Chinese man beats a prisoner

A Chinese man tortures a prisoner bound at the stake

A Chinese woman tied to a cross with a male torturer

A Chinese woman being tortured by two men

A Chinese woman tied to a cross and being tortured

Chinese man shackled to a bed, being tortured by three men

A Chinese woman is subjected to torture

In this article:china, execution, torture 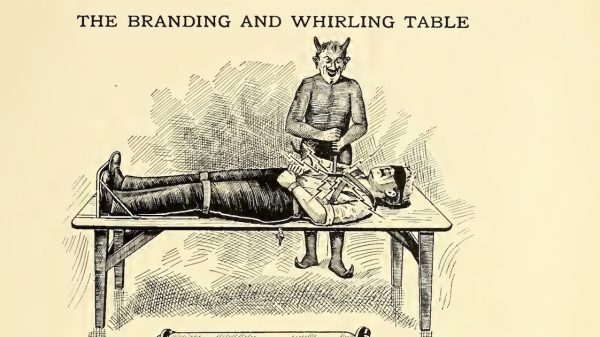