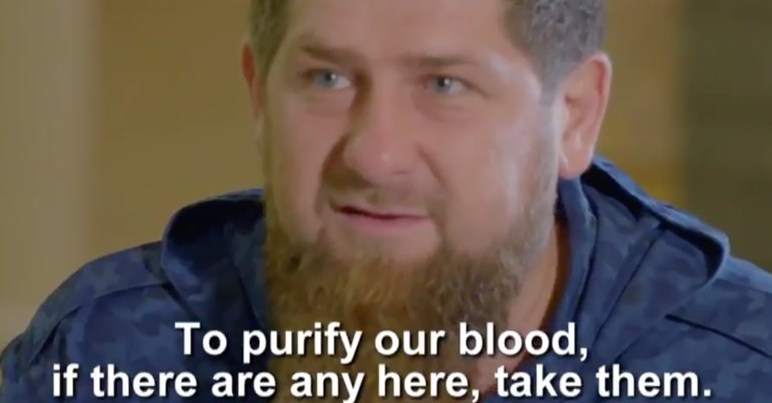 In the first sit-down interview with a Western media outlet, Real Sports HBO, Chechnya’s head Ramzan Kadyrov called gays “devils” who “are not people”. A close ally of Putin and the man responsible for the “gay purge”, which has killed at least 27 men, Kadyrov denies that gay people even exist, and definitively refuted that they even live in Chechnya.

When initially confronted with questions of how he felt about the reports coming out of Chechnya – gay men being beaten and tortured with the aid of their families – Kadyrov said, “This is nonsense.” He continued: “We don’t have those kinds of people here. We don’t have gays. If there are any, take them to Canada. Praise be to God.”

The 27 men that have since been killed since the purge began in early April were named in Russian newspaper Novaya Gazeta. Unfortunately, the newspaper weren’t able to track down any of the men. “All attempts to learn anything about these people were met with incredible fear from everyone we questioned,” the newspaper wrote. Many more are thought to be dead, bringing the toll up to a reported 56.

Kadyrov went on to blame America for igniting an “anti-Russian policy against the country’s leadership.” He also spoke of Russia having enough power to “put the world on its knees and screw it from behind.” Watch the disturbing clips below:

NEW: @RealSportsHBO is 1st western outlet to get interview w/ the Head of the Chechen Republic who is one of Putin’s strongest allies (cont)

2. Kadyrov says if there are any gay people in Chechnya they should be removed in order to purify the blood of the Chechen people. pic.twitter.com/oTshkbFGLO

3. In an interview with @RealSportsHBO one of Putin’s biggest allies says “we will put the world on its knees and screw it from behind.” pic.twitter.com/nYpu78nDDy

4. Kadyrov has a global assassin squad that has taken out his opponents and reporters in Europe and even steps away from the Kremlin. pic.twitter.com/57BmX1cnhn

In this article:Chechnya, Ramzan Kadyrov